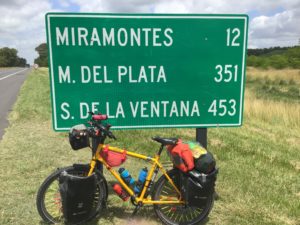 Photo. One of the ways the Argentinian authorities like to make cycle tourists feel better is just to put the small distances on the road signs. If I can get 2 photos on one post, me and technology eh?, the second one will be explained further down the blog. I did it! It appears at the very end, but read first…..next step for me is to work out how to insert photos where I want them……..

Firstly, a very Merry Christmas to everyone out there wherever you may be and, of course, not forgetting all family members and other loved ones. Where am I? Good question, I’m working my way south through the Pampas region in Argentina, and having a blast. The whole route from Buenos Aries has been as flat as a pancake and apparently the east of Argentina is all like that. The problem here is wind, and I’m not talking flatulence. It really can be a huge problem on a regular road bike. It’s worse for a cycle tourist as panniers create an enormous profile that you have to push through the wind.

The other issue in this area is the lack of wild camping spots. There’s just no cover to pitch the tent behind. Everywhere the tent would be visible and that’s definitely a no-no. However, I was told about a website called iOverlander the other day and it seems to be really useful. Lots of places to pitch a tent, some commercial campsites, some municipal sites that are either very cheap or even free. Another place that seems to be safe is behind some gas/petrol stations. These places are all marked on the website’s map, some of them don’t appear on google maps, so it’s become another useful point of reference.

But I have a confession to make. A situation has developed that is so disturbing I’m going to have to get excuses/mitigating factors out of the way first. Here we go. Being south of the tropic of Capricorn, and heading south, the sun is always behind me. Not by much at the moment, but it’s most definitely not facing me. It’s a bit to the left in the mornings and to the right in the afternoon. And it’s bloody hot most days and the back of my neck was getting a bit of a toasting. The heat itself is not too much of a problem after all my years in Laos, it is in fact a bit of a release from the cold of the UK and Spain in December.

Add to the position of the sun the draft created by the trucks here, all of which are seemingly very much less aerodynamic than trucks in Europe. The draft they create, particularly the ones coming from the opposite direction, was causing my baseball cap to be regularly blown off as I was riding along. (An aside. No, I don’t wear a cycle helmet and sometime in the future, when I have a moment or two, I will post a good old rant about why!)

So, the sun is behind me burning the back of my neck, and the trucks keep blowing my baseball cap off. The solution therefore is, turn the cap round and wear it back to front. Now I did say this was embarrassing, and it is. I’m not suddenly hankering after being a teenager again. Blimey, when I was a teenager I knew less than zero, don’t want to go back there again. Also, I must stress that I am not becoming, and under no circumstances do I want to become, americanised. (spellchecker didn’t like the small ‘a’ or the ‘s’, but it’s my blog so there!) When I think of all the times I’ve laughed at folks with a baseball cap on backwards, because it looks stupid, and here I am doing the same. But only for practical purposes, honestly.

It gets worse. I said the sun was behind me, albeit not by much, but it is behind me, and we all know that light travels in straight lines, si? Well my first day, yesterday, wearing the cap backwards, was really hot and I forgot to put any sun block on and when I got to my room in the hotel in Las Flores I realised, after glancing at myself in the mirror, that I have a very distinct red semi circle right in the middle of my forehead. (The space where the adjusting strap is) How the sun got to me there I have no idea. What a complete and utter turkey I am and no, I am not going to post a photo. (Well I might) Now I really have to remember to liberally apply sunblock and eventually, with a bit of luck, I’ll stop looking like a prat?????????????

Las Flores was a nice town. Loads of character in a quirky sort of way and I had a few bottles of Corona to celebrate my long ride from San Miguel del Monte. Had an enormous and very delicious salad and relaxed in a great little bar/restaurant. Again, I had lots of people wandering over and asking me the usual questions about where I was from and where was I going. They really are so nice here and very welcoming indeed.

One thing that has also surprised me here is the abundance of heladerias, or ice cream shops. They are absolutely everywhere, and as someone who knows a thing or two about eating ice cream, I’m in my element! It’s also the best ice cream I’ve ever experienced and as cheap as chips to top it all off!

Then I enjoyed a fairly easy day. Las Flores to Cacheri. It was only 60 kms the next place of any significance is another 60kms further on and I don’t feel ready to take on 120kms just yet, particularly if the wind is against. Also, there was a very interesting sounding hotel in Cacheri which I decided I wanted to stay in. The reviews I found about the place suggested it was ‘different’, so why not.

The hotel is in a converted railway station and from the outside there’s no suggestion at all that it’s an hotel. Someone was going past so I asked them if this was it and they showed me the door. Number 302! There was an old-fashioned bell pull, which indeed rang a bell and after what seemed an age a little old lady opened the door whilst holding onto two dogs. I asked if it was the hotel and she said it was and invited me to bring the bike in.

I’m still trying to think about how to describe this place. The best I can come up with so far is Downton Abbey, without the luxury, meets the Munsters, meets the Antiques Road Show. The power points scare the living daylights out of me. I’m convinced that when my devices need charging I’m going to be fried alive! The bathroom must date way back, possibly to 1876 which is the password for the wi-fi. Now there’s a contradiction if ever there was one.

The TV in my room is a very large cube shaped affair probably from the 70’s. And yet the little old lady who runs/owns the place has been totally charming and if, as appears likely because of the weather forecast I get stuck here for an extra day it won’t be a problem as long as the electrics don’t get me. I actually woke up in the morning after a brilliant night’s sleep and felt like Marty McFly (Back to the Future) waking up in 1955!

I had thought that I was going to be stuck there for another day because the weather forecast was pants, but on waking I checked the internet and it suggested that if I got my shit together and smashed out some kilometres there was a good chance I could get to Azul, the next town, before the heavens opened. I almost made it.

I got the first 50 kms done, only 10 to go but it pisses down. I get soaked and wimp out into the first hotel available. As soon as the money leaves my hand for the room the bloody sun comes out! Bugger. Anyway, I meet more great folks and go out for lunch with some of my new buddies and it’s suggested that after they finish work we drink beer. Now I’m back in teaching mode. More like it!

I’ll let you all know how it went, or should I say ‘how they went’?, in the next instalment. As always, thank you for reading this far and may your God go with you. 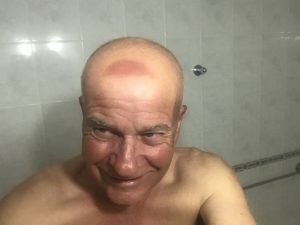