In a recent post I was able to show off the first stage of my fitting out of the storeroom that’s situated just behind the bakery. Previously the room was untidy to say the least, with boxes full of all sorts chucked on the floor as there was no shelving in the room at all. Matias has the skills, some of the tools, and a lot of raw materials to create what’s needed but seriously lacks time. So that’s where Wardy comes in!

What could be salvaged of the ‘scrap’ metal shelving units had all been used up and now it was time to continue but, this time, with wood. There are about 3 places around the farm where wood has been stacked up ready for a time when someone, me, would come along and start turning it into something useful. Where all this wood has come from I don’t know except that it’s been used before and can now have a second chance at life and without having to buy from a lumber yard which would mean more trees being cut down. 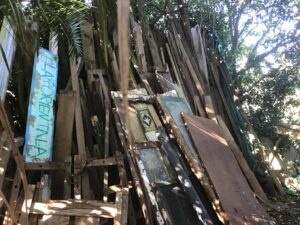 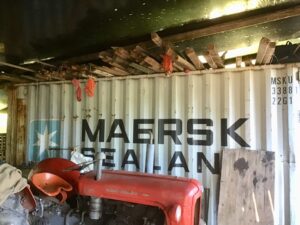 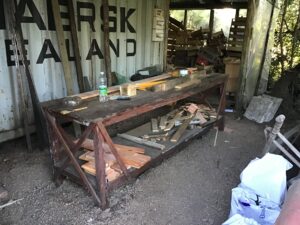 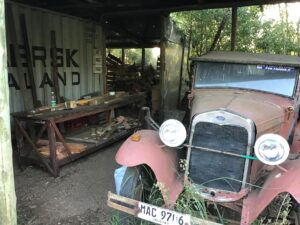 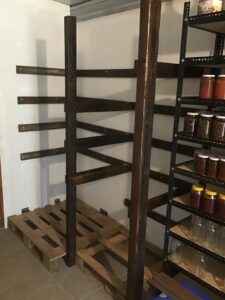 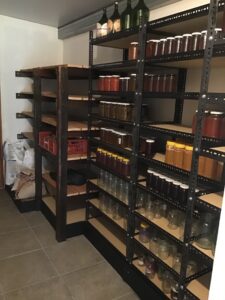 Photos. Wood is stored anywhere there happens to be space, some outside some under cover with an old Massey Ferguson for company. The workbench I use is basic to say the least (no vice!) but I do have a 1931 Ford for company. Stage 2 halfway through and then completed.

A slight problem with this stuff is that very little of it has been planed or jointed (carpentry expression for straight edges, impressed huh?) and so I’m very lucky that Matias has given me the brief that it can be ‘rustica’. Good job because some of the walls it has to be fitted to are nowhere near straight and level either. So, I got stuck in and discovered some useful looking lengths of wood in one of the stacks. Only problem was it had rained the night before and needed drying out. Into the kitchen/diner it went and a raging fire was lit and after 48 hours it was dried out and fit for purpose. Stage 2 was going to be the area for bags of flour and seeds for the bakery and these had to be stored on top of pallets to keep them off the floor. No problem, if the pallet doesn’t fit the space, cut it down to size and make it fit. Obvious to a tradesman but not so much for Wardy. Anyway, I figured it out eventually and got stuck in. 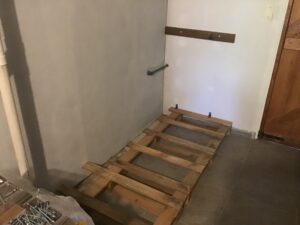 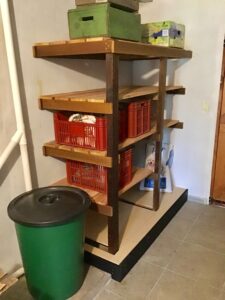 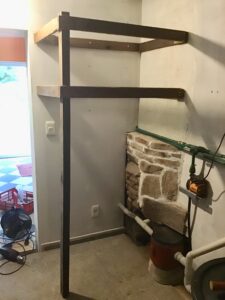 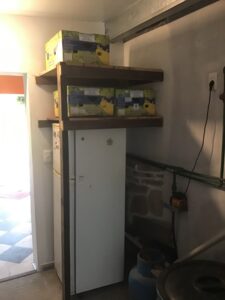 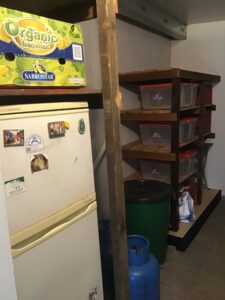 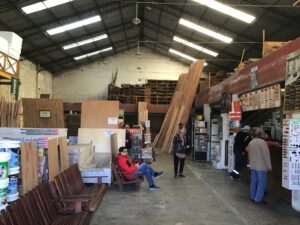 Photos. Stage 3 halfway and then complete, followed by stage 4. A picture of ‘Los Maestros’ hardware store in Montevideo where my ‘hardware Spanish’ is coming on.

With the storeroom taking shape Matias asked me to build a base for the dining room table. Another thing he hadn’t the time to get on with. For a number of years the family dining table top had been perched on two very flimsy supports and as Contento the puppy was keen on chewing the string keeping the whole thing together it was no surprise when it all came crashing down. Fortunately, we weren’t eating at the time! The table top itself was in dire need of a serious dose of TLC, so I got to work on it just before Matias set off for Europe and I was left to ‘farmsit’. Before he left I asked if I could paint the table and base when it was finished and I got a positive response. I then informed him that I liked bright colours and could I paint the table in a style that might be considered ‘unusual’. (Not in a Tom Jones way you understand) I was told to go ahead and it wasn’t a problem. One of the containers had loads of different paints in it, take my pick of colours were the instructions…………………. 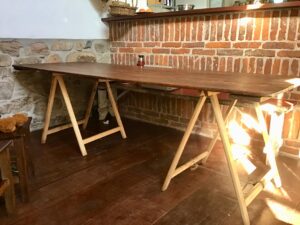 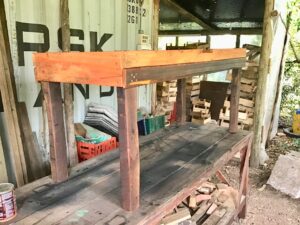 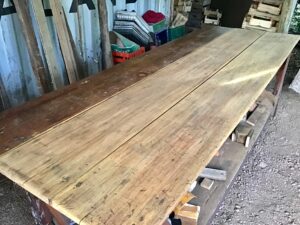 Photos. The table as it’s been for years. The new base I made with ‘zero wobble’ which surprised me more than the result surprised Matias! Sanding the top.

So what colours did I find? Well, red, white and green just jumped out at me. Matias is Italian/Swiss/Uruguayan, and they do have Italian as their first language. My rugby team, Leicester Tigers have the same colours and need as much support as possible these days! It would mean that there would never be a struggle for conversation when guests turn up. 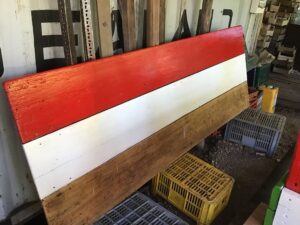 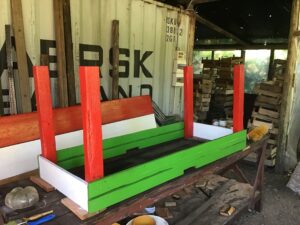 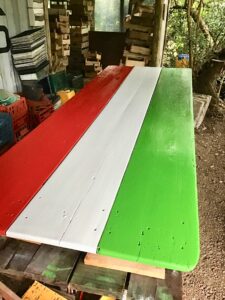 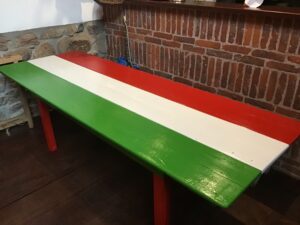 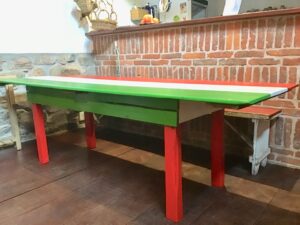 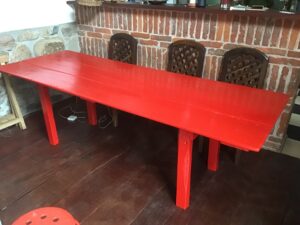 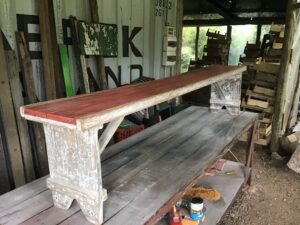 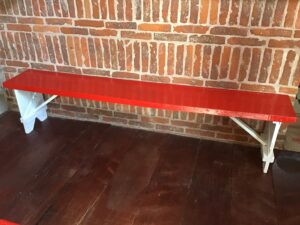 Then painting started. I did have some doubts for a while but when I added the green I thought it was the ‘dogs!’ The finished article in situ in the dining room. No worries about struggling for something to talk about. Slight problem was that although Matias and the kids loved it, Serena did not and things had to happen! Oh, ok, still different though! Even the bench got a coat, or two, of paint

I also, during my time farmsitting, had to feed the chicks. Painful memories of the chicks at the farm in Durazno, but ‘hey ho’ it’s got to be done. The step up to get into the chicken trailer was a good 3 feet and a box had been left to step onto. One look at this box and I knew it wouldn’t take my weight so there was only one thing for it. Wardy would build a step, and I did, and this one will definitely not collapse like the other one did. As with everything else I’ve made, I’m confident that if there was a major earthquake here, the house may fall down but all the stuff I’ve put together will still be standing! 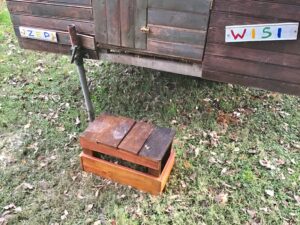 Photo. This thing will last millennia!

Then the next task. An old derelict trailer in need of renovation. This was something that I was very sceptical regarding my abilities, as although I might be able to nail, or screw, a couple of bits of wood together in ‘rustica’ style, an engineer I am not. At the time of writing I have done the destructive, i.e. easy, bits. That means taking off all the old, rotten wood, cutting off and/or removing a load of old bolts, screws and nails and taking off as much of the rust and old paint as possible. Matias seems very confident that we can get it back together again and all will be good. All I can say is he has more confidence than I have in this respect. 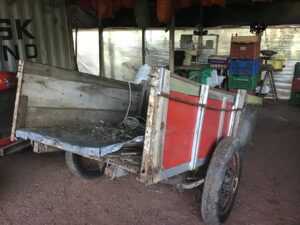 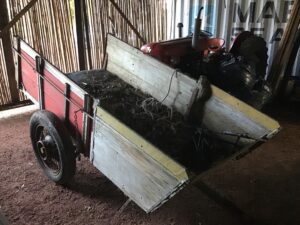 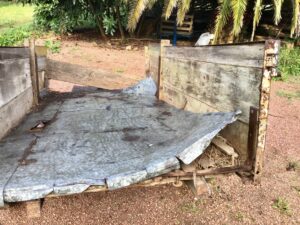 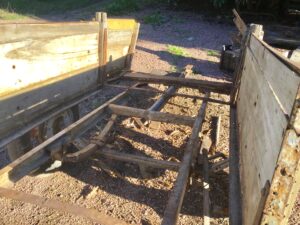 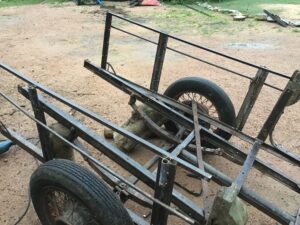 Photos. The trailer is falling apart. All the wood is rotten and it’s just about held together with rusty nails. My first thought was that it needs to be completely dismantled, all parts renovated, and put back together. However, my brief is to do what’s possible as quickly and inexpensively as possible. This could be fun or it could be a pain in the arse????

I will make further updates as to the progress made with the trailer and any developments regarding how long I’m staying here as things start to pan out. All I can say is I feel very happy here at the farm. Matias and family are great hosts, the work is not hard and it’s very interesting. Now cleaning lady is back to doing the cleaning the food is also back to being excellent. Actually, it’s even better than before as now Herman, Matias’ father is here and he’s a chef by trade and has produced some great food with flavour, seasoning and it’s even ‘succulent’, a word that has never been used in reference to Uruguayan cuisine before. Fortunately Herman is not Uruguayan!

That’s all I’ve got for for now, thanks as always for reading this far and may Odin, Thor and Freyr go with you.