My time in Colonia del Sacramento turned out to be a bit longer than planned due to mi amigo, el viento. (the wind, along with a lot of rain) A good job as it turned out as I happened to meet some interesting folks there and the city, albeit small, was a great place to explore. The first person I got to know was a lady cycle tourist from The Netherlands who is an incredible touring cyclist having ridden the length of the Americas, Ushuaia to Alaska some years ago, then to Adelaide from Holland for a friend’s birthday, turning her trip into book and since then she has taken numerous tours across South America from one side to the other. Her current trip is around the world and a more intrepid lady I don’t think I will meet. Great meeting you Marica if you ever have the time to read my waffling, bien viaje, stay safe and keep the rubber side down. 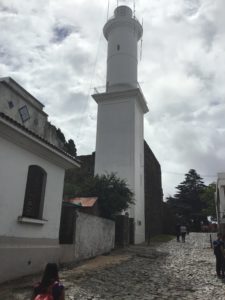 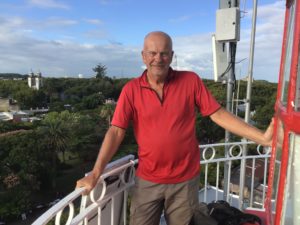 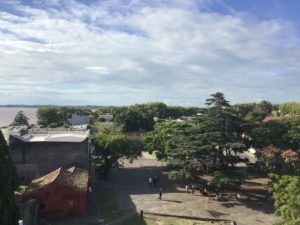 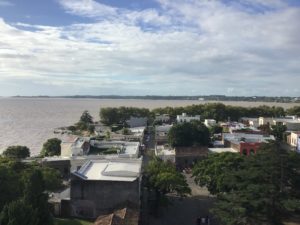 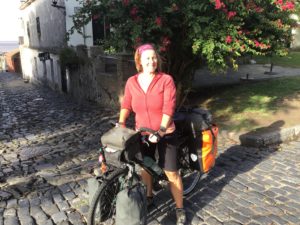 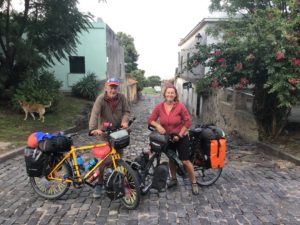 Photos. The lighthouse in town which Marica suggested we go up. I really thought I had conquered my fear of heights after climbing Sydney harbour bridge in 2006, but no. I got to the top but you may notice the white knuckle grip on the second photo as I held on for dear life! A couple of views from the top, and Marica and I preparing to go in opposite directions. Me to Montevideo, she off to Carmelo, Dolores and then Fray Bentos.

I also met an Aussie guy who makes beer. Now there’s someone to get to know! Luke was a great guy and, because the beer here in Uruguay is very expensive and not a patch on Argentinian grog, we found, and got stuck into, a very nice and very cheap, Uruguayan red. Luke, if you also happen to read this, I’m still on the Pueblo Sol, a great find my friend, many thanks! As I got further along the coast it would appear that it’s a rather popular tipple as I’ve found it in pretty much every store I’ve been in, even a tiny little town Ecilda Paullier, where a bottle was enjoyed on the campsite situated at a zoo without animals which I thought was novel idea. 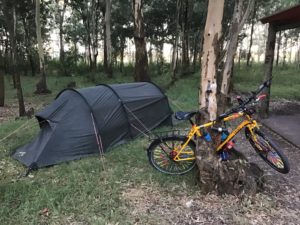 Photos. The campsite at Parque Zoo, Ecilda Paullier some 80 kms east of Colonia. On arrival you get sent to the police station to register and there’s no fee for camping. The cages are there for what was once a small animal zoo, but all were empty. Note the bottle of Pueblo Sol on the table along with the stuff for my cheese and tomato butties. No more living the high life for me, and I’ve almost forgotten what ice cream tastes like!

Uruguay continues to be ‘lumpy’, constantly up then down seemingly without any flat stretches of road. It’s got to the point where when I’m about to crest a hill I’ve stopped hoping for a nice downhill stretch to give me a break as I know it will be slightly downhill for not very long before another long climb. The wind continues to be in my face and at times I have to pedal on those short downhill stretches to keep moving.

Really hoping that I can find some work in Montevideo teaching English as I need to slow down the exodus of money from my bank account. Short post this time, the reasons will become clear in the next post which I will hopefully get out later today.