I said goodbye to the llamas, rheas, peacocks, sheep and cattle and headed off for Gualeguaychu. (Try saying that with your mouth full) It was only 65kms but the forecast was for it to be in the high 30’s centigrade. Again, I got through a staggering amount of liquid and was glad that there were far more frequent places to get a cold drink at the roadside. I always make sure I have enough in case there’s nowhere to buy cool drinks, but warm/hot water is just not very enjoyable.

Made it to Gualeguaychu drenched in sweat and headed for Buddha Hostel which had the best sounding reviews online. Found it easily enough although I did find an ice cream shop first and the staff there thought I was barking mad cycling in that sort of heat. Checked in at the hostel and it was ok as well as cheap which suited me after blowing the budget in Zarate. Sleeping arrangements were in dormitory style and in the bunk next to mine I met Leandro, an Argentinian, who was on a motorbike tour from his home in Santa Fe, not far from Rosario. 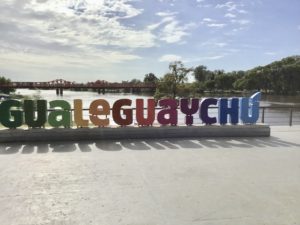 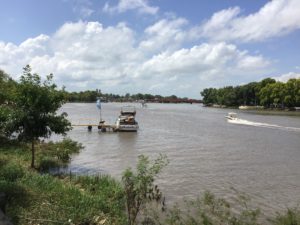 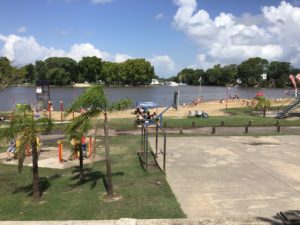 Photos. The Gualeguaychu sign by the river. It’s a great place, very scenic, and when I arrived, very peaceful. How that would change!

We got on well and my Spanish had a good workout, along with help from google translate, as Leandro only spoke about three words of English. We agreed to eat later and I told him I liked craft beer and had found, online, the best sounding bar in town not too far away. He said ok and after eating we headed off, away from the river, and into what I hoped would be the ‘real’ Gualeguaychu. Only one photo of the bar online and it looked tiny but intimate, the sort of place proper beer lovers would congregate. Eventually, after some toing and froing we found the address but there was no sign to suggest it was a bar and it didn’t look promising. It was then I reminded myself, for the umpteenth time to check how recent any reviews for places were as it looked like this place was closed.

Only one thing for it, so I knocked on the door. It was opened by a lady and there was a guy sitting inside and I immediately recognised it from the online picture. This was the bar ‘ZZ’. It turned out that they were temporarily closed as due to the heat they had had some production problems and were making changes to the systems before re-opening at some point in the future. I think Daniel, the owner, must have been impressed by my determination as he ushered us inside and got some of his excellent bottled craft beer out of the fridge. It was then I found out Leandro was teetotal!

Daniel quickly called his business partner, Pancho, who turned up and we all had a great time. I then asked if there was anywhere in town where I might be able to watch the Six Nations game the next day. They told me to come back the next day, we would all eat, have a few drinks, and the game would be on. A result! The next day I provided the ice cream, a whole kilo of it, and Daniel made a shed load of empanadas, we all got stuck in and then the day was spoiled by England losing the rugby, the first game I’d seen in ages. Bugger!  Anyway, friendships were cemented and I told them of my plans to cross the border to Uruguay on Monday. Later on that day, things  got even worse when the carnival, apparently the 3rdbiggest in the world, had to be cancelled due to the arrival of an incredible storm. Double bugger, as I’d really been hoping to get some film of that. Pancho had shown me some of last year’s and it was an amazing sight. 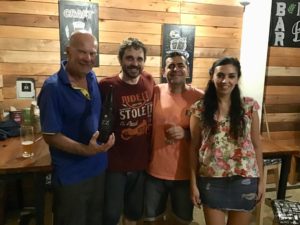 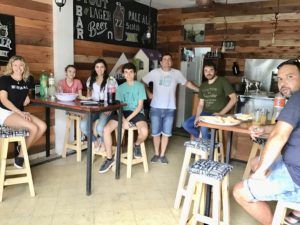 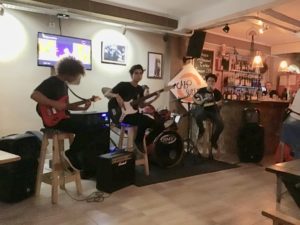 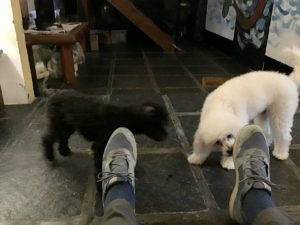 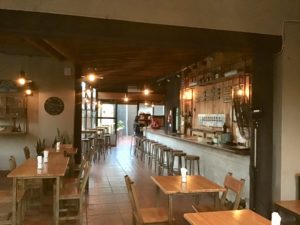 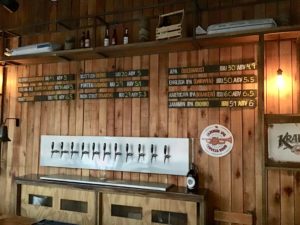 Photos. Yours truly, Daniel, Pancho and Daniel’s lovely wife whose name I have sadly forgotten. Shame on me. Daniel, Pancho and their families in ZZ bar with Leandro far right, drinking coke in a bar! Cabo Suelto, Daniel’s son, Augustin, is the bass player, 14 or 15 years old and fabulous musicians. Stars of the future! The two little dogs at my hostel. I took loads of pictures but they were constantly on the move and most pics were blurred. Ultra cute. Two photos of Alabama the bar I found that was my favourite. It’s been noted that most pictures I take of bars are when they’re empty. It’s because I’m the first customer!

The following day Daniel sent me a message saying that a journalist friend wanted to interview me and would come to the hostel with an interpreter. That was a relief as I didn’t want a repeat of the radio interview in Daireaux. Fabian then arrived with his wife Celina who was an English teacher so there should have been nothing lost in translation. Neither Celina or I realised that Fabian would do the article without asking her for details to be translated so I’ve ended up with an extra grandchild! Anyway, the article appeared in the local paper and I was given a copy to keep. 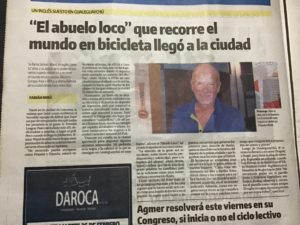 Monday arrived and I set off for the border where the crossing into Uruguay was via a suspension bridge, the slight downside was that bicycles were prohibited on the bridge so I would have to hitch a lift. No problem with that and so I stood by the side of the road and stuck my thumb out. 3 hours later and no luck. It seemed that 90% of the traffic was headed into Argentina and the vehicles going to Uruguay contained very few pick up trucks. Also, there was no shade and again, it was roasting. Eventually I made the decision to give up and go back the 30kms to Gualeguaychu and have a re-think. They were very surprised to see me at the hostel but most of the guests who had been there had left after the weekend and I had a dorm to myself.

The next morning, I packed up again and had made my mind up to go back to the same place and hope for better luck with regards to getting a lift. Coming down the stairs, which were extremely steep, I felt something pull in my back. It must have been the twisting required to negotiate the stairs safely, along with carrying too much at once. Within half an hour it was obvious I wasn’t going anywhere as my back was locked up ‘good and proper’. The owners of the hostel were very kind and got me a different room on the ground floor and told me to relax and get myself better. This has involved spending hours lying down which, for someone like me who likes to be doing stuff has been as boring as hell, and has meant that I haven’t been able to get up to date with the website until now when things are nearly back to normal.

It took a few days for my back to loosen up so I stayed for the week so that I could see the carnival which, it turned out was held every weekend for a couple of months and is a huge boost to the local economy. When Friday arrived, the town became packed as what was estimated as 100,000 people invaded Gualeguaychu. I then changed my mind about seeing the carnival as I found out it would be difficult to move and the risk of having stuff stolen was pretty high. It was also too far to walk and I wasn’t going to take the bicycle and risk losing that. I contented myself with evenings spent in Alabama, an excellent place that sold, you’ve guessed it, craft beer. In there I got to meet lots of the locals and also a good number of folks who had come for the carnival and my Spanish got plenty of practise and I do feel some progress is being made. 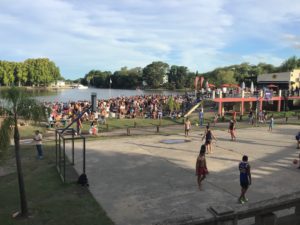 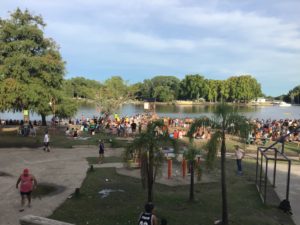 Photos. Two shots of the riverbank in the late afternoon showing how busy it was here at the weekends. In ‘Alabama’ with some of the many folks I got to chat with about what on earth ‘Abuelo Loco’ is doing and how. Super people.

So, my days in Argentina, this time around are coming to an end. It’s been a wonderful time if extremely tough on occasions. The people have been fantastic, particularly when I think of all the warnings I was given before getting on the plane about how I would be robbed, mugged, beaten, raped and tortured before I’d left the airport at Buenos Aires. I will be back I’m sure. I really want to be here when Argentina play England in the Rugby World Cup on October 5thand that should tie in nicely with me making my way north west to Bolivia, Peru, Ecuador and Colombia. Having said that my plans are flexible and can change at any moment. Watch this space!

Thank you, as always for reading this far and may your God go with you.