One post, or a part of a post, I have been considering was going to be about the incredible amount of roadkill I see whilst riding, and it is a lot. I’m sure everyone will be happy that I haven’t taken photos as it’s a bit grizzly and the smell, sometimes, is not conducive to stopping and hanging around. I’ve seen dozens of birds of various types, loads of hares and rabbits, many snakes, and then there’s the stuff that you wouldn’t see in Europe. Plenty of South American grey foxes, over 20 armadillos, which is sad as I’ve always thought they were very cute little animals. Vicunas, either whole carcasses or parts of, and then just a few days ago I came across a dead Capybara, the world’s biggest rodent. Now although I’ve seen these before in zoos, I’d forgotten just how big these things are. Absolutely massive, I shudder to think how much the one I saw weighed. 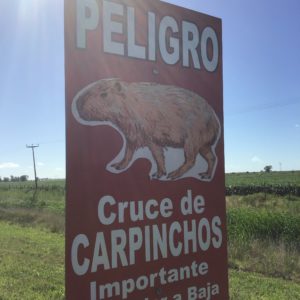 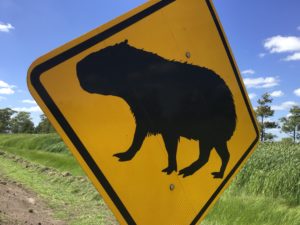 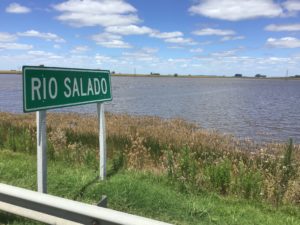 On the way from Nueve de Julio, heading for Chivilcoy, on Ruta Nacional 5 I had what was possibly the worst ride of the trip so far. The first 20kms in particular was dreadful. The wind was quite strong and against, but it was the lack of any shoulder, and the trucks who made this an absolute nightmare. (I wasn’t surprised to see the capybara lying there, I just wondered how much damage had been done to whatever had hit it) I was forced to get off the asphalt and onto the grass verge probably as often as once or twice per kilometre just to get out of the way of the trucks and avoid suffering the same fate. It made me think that I just had to find some quieter roads. Luckily when my patience was really wearing out, I came to some roadworks and from then on there was a decent shoulder to get me away from the trucks and I could start to relax a bit.

I’d been looking forward to Chivilcoy, don’t know why, just a hunch but it turned out to be ok, but a bit ‘sterile’. Not sure why I chose that word but it didn’t grab me and make me want to stay. The people at my hotel recommended a place called Oliva as a place for craft beer, but they only had two to choose from and although the place was well appointed it was more family restaurant than bar. I decided to go in search of somewhere more to my liking and found all sorts that served pizza and bottled beer, no thank you, the rest of the places listed were closed.

I ended up going back to Oliva and used their wi-fi to plan my departure the next morning. I did, however, get to be entertained by a group of seven women who had four kids in tow, three of whom were boys aged around 4 or 5 years. These kids must have been on the energy stuff because they were all incapable of sitting still, and charged around creating mayhem. I was far enough away not to be bothered by them, so I just settled back and enjoyed the show. Two of the women followed the kids round putting back all the stuff they’d thrown on the floor, the other five just sat there, looking embarrassed, probably wanting the ground to open up. I didn’t care and laughed my socks off until they spoiled everything and left. I was gutted! 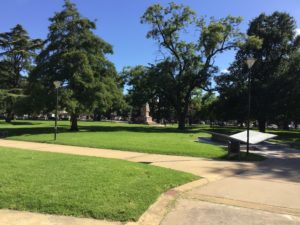 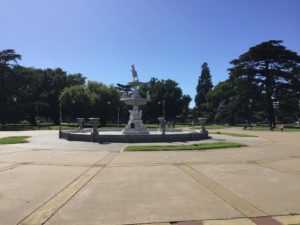 Photos. Oliva, before the mayhem started! Two photos of the central plaza, much like other towns and cities here.

Next stop Mercedes, another place I had high hopes for. With a bit of luck, it might be better than Chivilcoy. Strange how things turn out. My first impression of Mercedes was not good, it just seemed a bit scruffy as I rode into town. Then I got a surprise as I crossed the railway line and saw the station which had four platforms instead of the usual one. Once over the railway line the city changed completely and looked very nice indeed. I found my hotel easily, checked in and went for a walk. Mercedes turned out to be very nice and I’ve been here for four nights and enjoyed it massively. I found ‘Bulevar’ the first night with excellent food and great craft beer, if a bit on the expensive side. 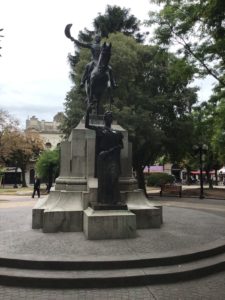 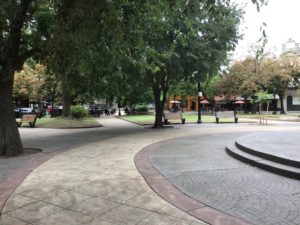 Photos. ‘Bulevar’. Yes, it was that dark! Another Argentinian hero statue in the central plaza.

The second night I went to ‘Laurino’ where I’d had a coffee that afternoon and noticed that they serve craft beer. Good decision Wardy. Even better food and the beer was as cheap as chips. 55 pesos for a wonderful pint of porter, which is about £1.10 or $1.45. At that price you just can’t leave it in the barrel as it might go bad! Also the food was amazing, and I even remembered to take some shots before diving in. I went back on the 3rd night and had a laugh when an old fat Rottweiler turned up on the scrounge. At one point he stole a paper napkin off a table and ate it. He was definitely not under fed though, and he even tried to have a go at my crepes. No chance buster and everyone thought it was funny when I told him so, in English, and then asked him, in Spanish if he understood English. He just continued to look hungry. I even used a translation programme on my phone to tell him, again in Spanish, that he smelt pretty bad! 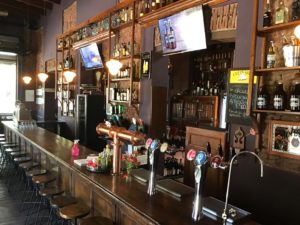 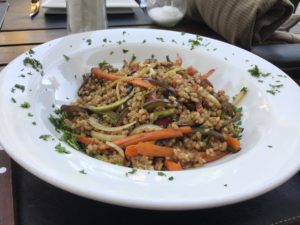 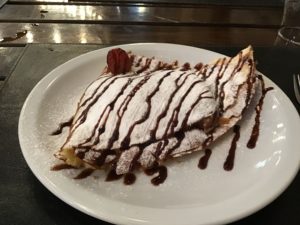 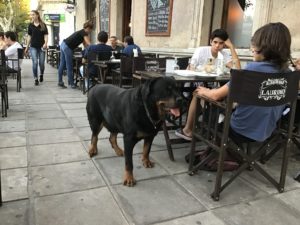 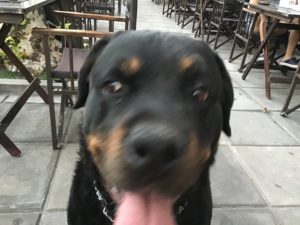 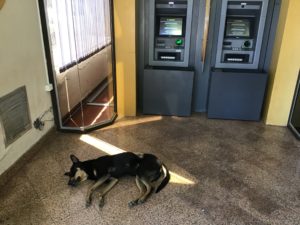 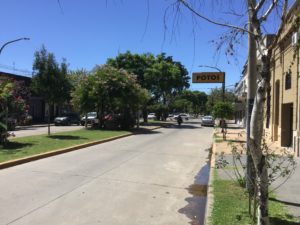 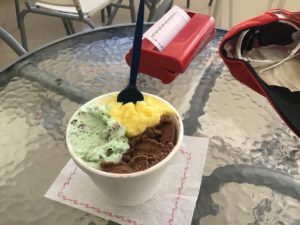 Photos. Had to go to the ATM, guard dog was crashed out. One of the main streets in Mercedes. Lunch!

I also had a long talk with a guy at the hotel who was very interested in what I was doing and where I was going. I mentioned that my funds would run out at some point and I would be looking for work, probably teaching English, somewhere in South America. He has been very positive about putting me in touch with some folks who may be able to point me in the right direction after schools return post summer holidays, early next month. I will be interested to see if anything comes of this, but he did say that in the Argentinian constitution that anyone who wants to come to live and work here will be allowed to do so and there will not be issues regarding work permits, business visas and the like. So much more positive and welcoming than SE Asia, where life is just made so difficult unless you are on mining, diplomatic or aid agency salaries and can afford to pay your way through the quagmire that is life there.

Enough for now, it’s my last night in Mercedes and they have a new barrel of porter at ‘Laurino’ which I have to check in regard of quality control. Yeah, I know, it’s a dirty job and someone’s got to do it! Thanks as always for reading this far and may your God go with you.