When I first discovered ‘Workaway’ I was really keen to get on board and I had soon registered including paying the annual fee of $42US. It seemed like a wonderful opportunity to learn new skills, get to know local people and live their life, whilst at the same time doing some honest labour and, in return, getting accommodation and 3 meals a day. It should be a perfect ‘win win’ situation for all concerned. However, I wasn’t born yesterday and I could guess that there would be hosts who, because they’re like that, would do their best to take advantage of volunteers. On the flipside I’m sure there will be some volunteers who don’t want to ‘get their hands dirty’ and would, consequently, be a waste of space for the hosts.

My first placement was easy workwise, albeit somewhat boring, and being stuck on a remote farm with only Vaquita the collie for company, was a bit lonely to say the least. The provision of food was pretty crap and I spent too much of my own money feeding myself and time going into town to get some Wi-Fi, to be really happy. I stuck it out for the month I had promised my hosts, and left. The next place near Montevideo was fantastic in every way, and 4 months just sailed by, and I was very sad to leave. I keep, just for my own peace of mind, a log of the hours I work and what I’ve done, and I averaged 29 hours per week there, 4 more than the agreed 25, and it was all pleasure, as the work was varied, interesting and I was never under pressure to do more or work when I had decided to stop for the day. Great people, great place, wonderful food.

I was really looking forward to my third placement at the next farm. The feedback given by Workawayers who had been there was all very positive, the hosts were marvellous, the possibility to get involved in construction was supposedly going to be available and the food sounded fantastic. Happy days! Roberto was on his own when I got there as Maria was in Buenos Aires and my first day involved cutting the lawn and helping with a general tidy up before her return. Roberto had made the food and it wasn’t bad. So far so good. Then, on the Friday afternoon Maria returned and I was informed that there would be no need to do any work over the weekend and we would start again on Monday morning.

Over the weekend I started to have reservations about what I’d let myself in for. Nothing serious but little nagging doubts as more things emerged or were said. Maria told me that she had owned a clothing company and sold it some years earlier for a huge amount of money. Then she and Roberto had built the house from scratch after making the decision to live, as much as possible, ‘off the land.’ That’s when the alarm bells started ringing and I became more aware of what they were like. Imagine that you’re building your ‘forever’ home, and you have bucket loads of cash. Would you build a piece of shit? About the only thing that appeared to be of any quality were the roof trusses which they must have paid good money for as they were made of quality timber. That was where the spending had stopped!

Everything else, and I mean everything, must have been sourced from junk yards or fly tips. Now I have nothing against re-using stuff but there’s a limit. The windows and doors were garbage and had probably been found at the side of the road or ‘acquired’ from abandoned buildings. The electrical wiring would probably not pass safety tests in Laos, let alone the developed world, and every time I went to plug something in I held my breath and prepared to be personally linked to ‘Electricidad Argentinos’. Plugging something in was a regular occurrence as the number of electrical items, junk, they had found on fly tips far exceeded the number of power sockets. 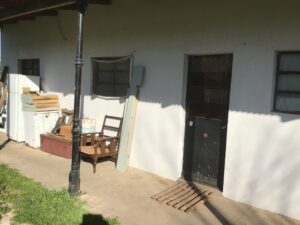 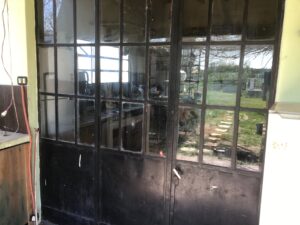 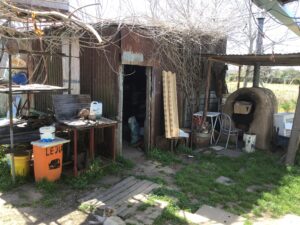 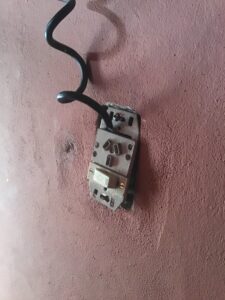 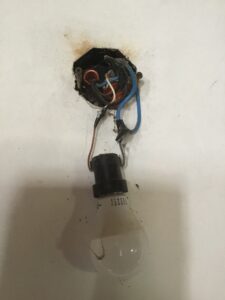 Photos. Top left to right. The front door. This is ‘their’ part of the house where one would think it should be a bit better. No. Sheets hang over the windows and both door and windows are horrible, old metal, probably found by the roadside. The back door into the kitchen/common area. Piece of crap that won’t lock. Every time I go to town I hide all my stuff. The shed. Remember, they built this crap from scratch and they have shit loads of cash. Astonishing! Bottom, left to right. Two of the three electric ovens, probably found at the roadside. Light switch in my room. Light ‘fitting’ in the common room, they are all like this. The folding door to my room. Bet they were overjoyed when they found that!

The kitchen, if that’s what it was called, was complete crap and everything, crockery, cookware, utensils and cutlery were all of the ‘found at the side of the road’ variety. In addition, whenever I picked anything up it was either sticky, greasy, dirty, broken or all four! Remember these folks are loaded. They have properties in Buenos Aires which they rent out to students and they have another place about 12 kms away with 3 cabins, which they also rent, and yet they choose to live in this dump! 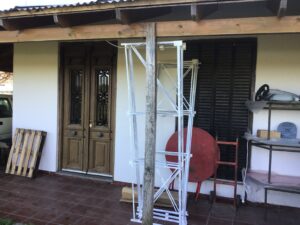 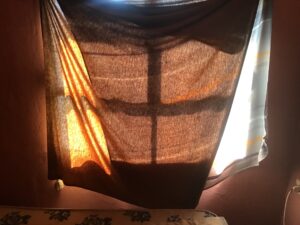 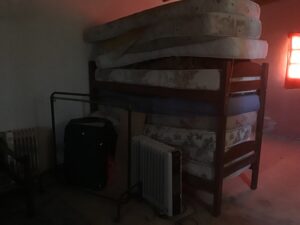 Photos. A wooden door, makes a change from the metal shite. Why bother with curtains when you can put old sheets up at the window? (My room!) They know where people fly tip mattresses! This is just a few of them.

Then they announced that another Workawayer was going to arrive a week after I had got there. This seemed strange, almost as though they needed a back up in case one of us left. (They were set to go to Brazil for 2 weeks and wanted the farm taken care of) As far as I was concerned I wanted to meet this other guy and ask about Workawayers ‘etiquette’. By this I mean regarding the feedback it’s possible to leave on the company website about your hosts and similarly the hosts can leave feedback about volunteers. I had come up with a theory that there must be volunteers who were giving fabulous reviews about places just to solicit a reciprocal review about themselves to boost their image and desirability for other hosts. I refer to the reviews I had read about Maria’s ‘wonderful’ cooking!

Yes, Maria’s cooking, which her Sister-in-Law had warned me about when we met at the weekend. You see Maria doesn’t so much cook as incinerate. I did think for a couple of days that I hadn’t noticed the Deliveroo guys on bikes arriving with the food orders straight from Chernobyl or Fukushima. If eating food that has been ‘carbonised’ is healthy then this pair will live to be 200 years old! When taking the lid off something she’s cooking it must be akin to staring down the vent of a recently dormant volcano or the black hole of Calcutta. She said to me after about the 3rd meal that I don’t eat very much, which goes to show how little she knows about me and that she has no inkling as to what an awful cook she is.

Things kept getting worse and Maria’s attitude was overbearing, bossy and obnoxious. I was only staying to meet the other volunteer and I had also, before it started to go wrong, asked Maria and Roberto to collect some stuff for my bicycle. I had already ordered and paid for it, when they went to Brazil. She would tell, not ask, me to clear the table and wash the dishes, no problem but where’s your manners? The work regime was all about them and whether or not they could get more hours out of you. The work was mainly digging very heavy clay soil which I didn’t mind as I wanted a good upper body workout but it was bloody boring to say the least.

Then on the sixth day of my stay she told me that I had to level an area of ground, with a spade, that was used as hard standing for their vehicles. The ground was like iron and only the day before they had engaged a farmer with a plough to turn the soil on their field. Why didn’t they get him to break up this area? It was about 10 square metres and would take days to do by hand. I just told her that it was going to be a bundle of laughs! I started and it was nigh on impossible. Stupidity of the highest order and I was just about to say ‘stuff it’, losing the money I’d paid for the stuff for the bike, and just packing my things and going. Then I started to laugh as it had dawned on me that I could find a positive from this particular negative and make a great blog out of the whole episode. So please realise my wonderful readers, and I mean both of you, I’m suffering like hell, just for your entertainment!

I then thought about pseudonyms for my amazing ‘hosts’ (sic) as Maria and Roberto sound a bit too nice. I went through the lot for her. Reichsfuhrer, Grupenfuhrer, Hannibal, Gengis, Stalin, Pol Pot, Goebbels, Rose West, Cruella and Bunny Boiler but eventually settled for Hyancinth as sarcasm is most definitely the best form of wit for a situation like this. He, therefore, had to be called Richard, and the next instalment of this episode of my adventure will have to wait for another time when my creative juices will be at their zenith!