It’s been a long time since I’ve written anything, some of you may be quite pleased, but now I need to catch up on the last 3 months or so.

‘El bungalow del Ministro’ is the name of the hostel where I was undertaking my latest volunteer placement while I waited for my new passport and credit/debit cards to arrive. I had less than $200 to live on until such time I could ‘hit the plastic’ so I had to be very careful as to what I spent. Luckily, I had lots to keep me occupied as there were a number of areas at the hostel that, in my opinion, needed urgent attention. 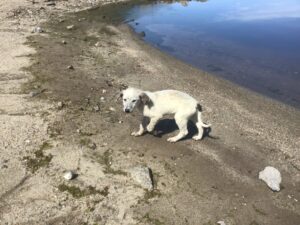 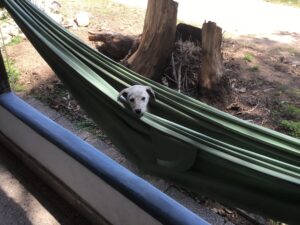 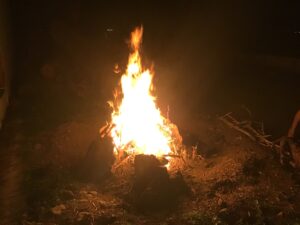 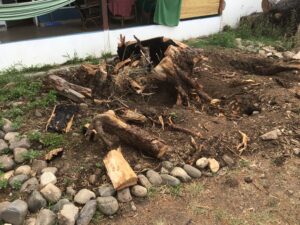 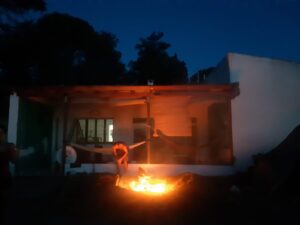 Photos. A puppy Manolo and I found dumped at the garbage tip. We took her to the vet and then home. We fed her, loved her and gave her a name, ‘Hu’. Sadly she only lasted 6 days before Parvo virus took her. I had the awful job of burying her. A huge tree stump right outside ‘El Bungalow’. We burned it on 3 or 4 occasions to try to get rid of it, eventually Manolo found a guy with an earthmover who took it out in no time.

The first job was cleaning the bathrooms and it would appear that Manolo, my host, had not a lot of idea about how to clean things really well. I immediately requested he get white vinegar and bicarbonate of soda to tackle the heavy stains in the 4 bathrooms, both on and in the toilets, and in the bathtubs. Initially he bought about 100 grams of bicarb and half a litre of vinegar which would last about 20 minutes. My first thoughts were that he was a real ‘tightarse’ although eventually he got to realise that I have a huge amount of experience travelling and staying in all sorts of places from abandoned buildings and shitty campsites to some very up market places in years gone by when I had money to burn and didn’t know any better.

At long last he purchased the necessary amounts and with some serious ‘elbow grease’ I, and the other volunteers, got the bathrooms looking a whole lot better. Manolo, it turned out, was new to the hostel business and obviously needed to start to understand that he could do with the experience that I and the other volunteers, as travellers, all brought to ‘El Bungalow’. After the bathrooms we were tackling some other issue when he asked me to get something from one of the outdoor buildings. I opened this particular door and was greeted by an almighty stack of disorganisation with no hope whatsoever of finding what he’d asked for. I immediately said that this room needed sorting and tidying. He then showed me two other rooms just like it!

The other Workawayers there at the time were 3 Norwegian girls and the next day we got stuck into taking everything out of two of the rooms and laying it all out in the back yard and we told Manolo that we would put all stuff that was definitely trash and anything we thought was trash in one room, with everything we thought was useful sorted and stored neatly in the bigger room. Whilst this was going on I found a large stack of very decent wood which I decided I could make that room into a workroom with the wood being used to make a workbench. I was surprised when Manolo said ok, but I could tell he wasn’t keen for some reason. He borrowed a few tools from his cousin and I set about designing the bench, convinced that it would be of great benefit to his business.

We went to the local hardware store armed with a list of things I needed to start the bench build. I told Manolo we needed 50 screws of a certain size but he misunderstood and the guy behind the counter counted out 15. When I pointed this out Manolo was concerned as to why I needed 50 and he seemed to not be keen on the cost. (They are pennies!) He then admitted that he didn’t see the point of having a workroom and bench as he’d never needed it before. I then went out on a limb, having seen how things ‘worked’ up to now, and told him that when things went wrong and repairs were needed his ‘modus operandi’ was to pick up the phone and call one of his family for help. I then suggested that he tried to become independent and be in a position to help himself by setting things up so that could happen and the workroom and bench were the first things needed and then he would need to spend some money on tools so the difference between 50 and 15 screws was insignificant.

He thought long and hard over the next couple of days and I did wonder if my time there would come to a quick end, however he suddenly showed me a long list of tools he had decided to order and he told me that I could press on with building the bench and anything I needed I could have. For a moment you could have knocked me down with a feather, but now I could crack on with the sort of project that really interests me and it would take my mind off when my passport etc. would arrive.

The bench slowly took shape, slowly because every time I needed something Manolo would insist on coming to the hardware store rather than give me some cash and I go myself on my bike. Anyway, eventually the bench was finished at the same time as all the tools arrived. For me it was like Christmas had come early and I could start to do things. I made all sorts of stuff for the bathrooms like holders for extra toilet rolls and slatted wooden ‘thingys’ to stand on when showering. Also, a whole range of things had been identified that needed repair and I had the stuff to crack on and work my way through a long list. All this time I was watching the tracker on where my letter containing my passport and plastic cards were, whilst hoping my $200 dollars would last until they arrived. I was also aware of my initial 90-day visa to stay in Argentina was nearing its end and wondering what to do about when and where to go next. 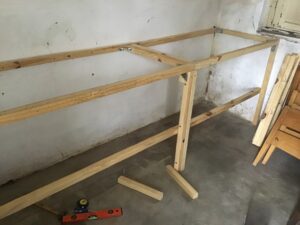 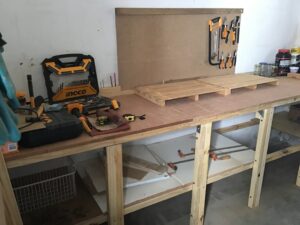 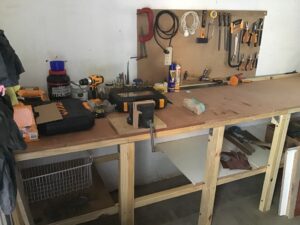 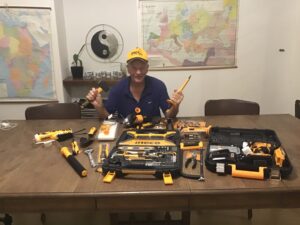 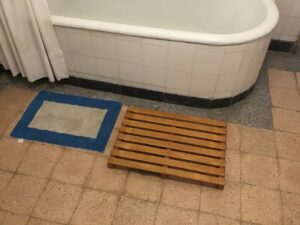 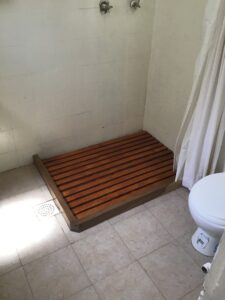 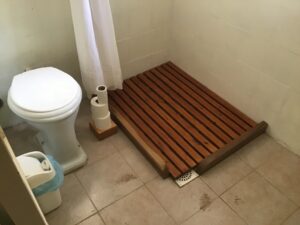 Photos. The bench taking shape and finally finished with a vice installed, and the arrival of a whole selection of tools so that repair and building work could be done in house. The first things I made were for the bathrooms. Two had bathtubs so I made wooden slats to stand on after showering and in the other bathrooms the same sort of thing, but bigger, to stand on whilst taking a shower. I made holders for extra toilet rolls for each of the 4 bathrooms out of scrap wood.

During the little time I took off I had a chance to cycle around the lake a few times, a journey of almost 70 kms and what a difference doing it without all my panniers, tent and all the other stuff I have to cart about. I also got to swim in the lake which was nice and cool when the temperatures were regularly in the mid and high 30’s. Some time, not much mind, was also spent in the few local hostelries. Just doing some quality control work you understand? 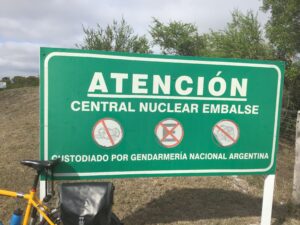 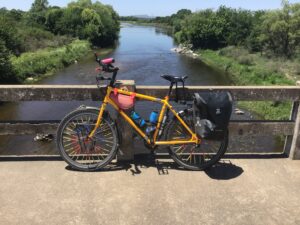 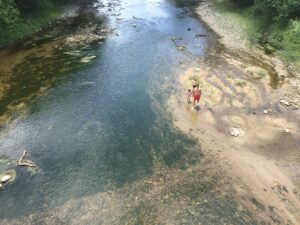 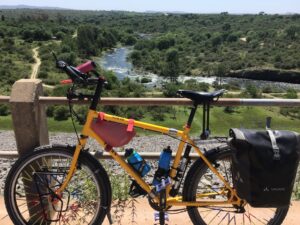 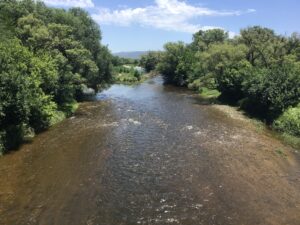 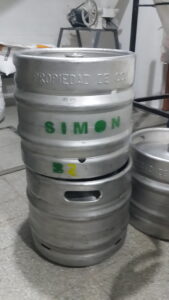 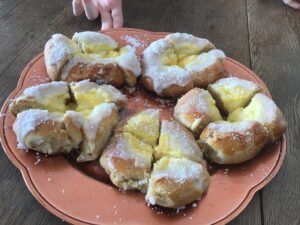 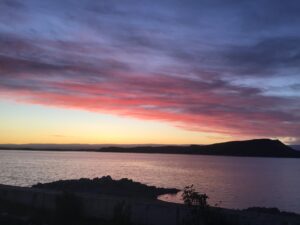 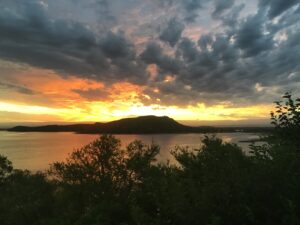 Photos. The only ugly bit of the area was a nuclear power station on the opposite side of the lake which I would pass on my near 70 km ‘circuit’. The rest of the scenery was great. Lots of rivers with clear sparkling water which you could drink from. Even better was a brewery in Embalse which made wonderful craft beer and put my name on every barrel! The Norwegian girls were always making cakes, don’t mind if I do. A couple of the amazing sunsets looking out from ‘El Bungalow’.

The time was rapidly approaching when the first guests of the season would arrive which also meant the end of the time I, and the other volunteers were needed. The last two weeks were somewhat of a rush as Manolo had left a number of things to the last minute which was frustrating but myself, Majda and Juliette, both from France and Nora from Hungary cracked on and finished everything in the nick of time and sadly it was then time for us to go our separate ways. 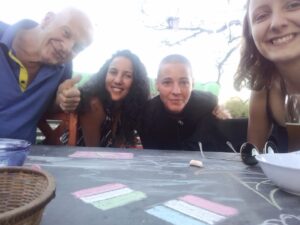 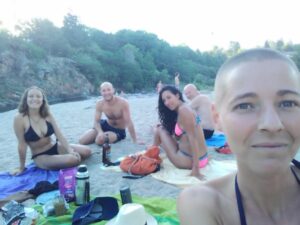 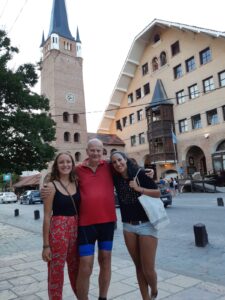 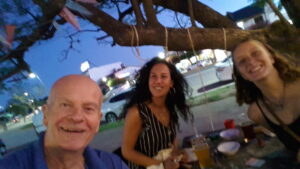 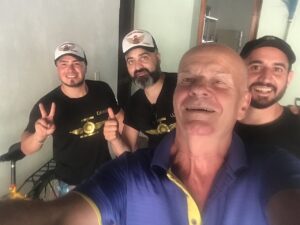 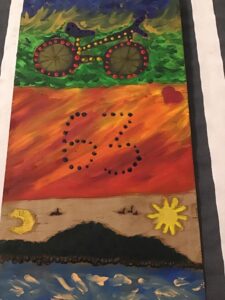 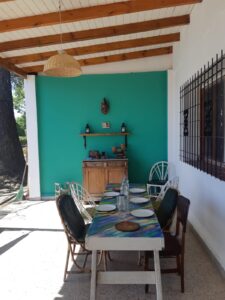 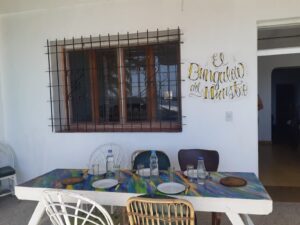 Photos. Yours truly, Majda, Juliette and Nora. We made a great team. With Manolo on a downtime visit to a beach by the river near Santa Rosa de Calamuchita. Then, despite the happy faces the day Nora had to leave. Me, Juliette and Majda in Villa General Belgrano. A pic of the first guests at ‘ElBungalow’, 3 motorcyclists who were great fellas and took a great deal of interest in my adventure. My birthday present from the girls, even though they got the numbers the wrong way round! A couple of pictures of the front patio at ‘El Bungalow’ after our transformation.

By this time, I had decided I would go to Chile and just needed my passport and plastic cards. They were held by customs in Cordoba for over 7 weeks on top of 2 weeks being stuck in Buenos Aires. The irony of this delay will become apparent in future blogs. All this despite having, ‘solo documentarios, nada de valor’ (documents only, no value) plastered on the envelope.

Eventually the letter turned up and I could move on. I had planned a journey that I thought would be tough but enjoyable and was really looking forward to turning the pedals and being in areas where I could enjoy some proper wild camping, although that will be for another time.