I left Mercedes after really enjoying the city, and headed for San Antonio de Areco. It wasn’t that far which was a good job as the wind was, as was becoming a regular occurrence, against. By now I was not too far, (less than 200kms) from Buenos Aries with the benefit of more places to re-fuel, but the downside being a lot more traffic. Despite being that close to the capital I had no intention of going there as I’m not keen on big cities. Too much time spent worrying about the possibility of the bike, or other possessions, being stolen. San Antonio de Areco is a small town which I enjoyed even though I only stayed one night. An ice cream shop was located quickly, a nice inexpensive hotel, and then onto the eating part of the day followed by some good craft beer to wash it all down with. 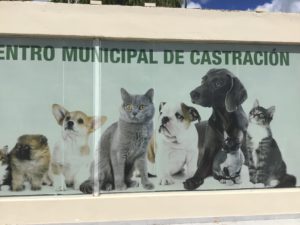 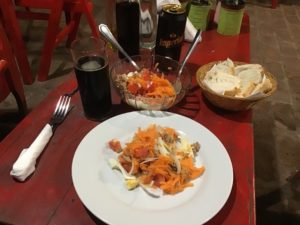 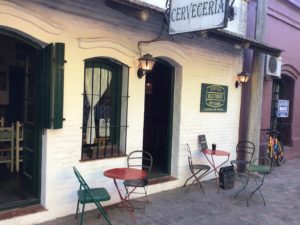 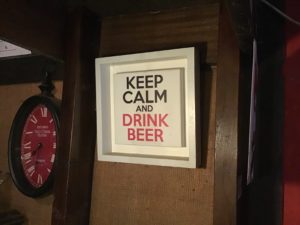 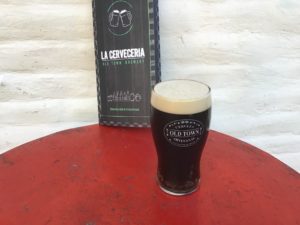 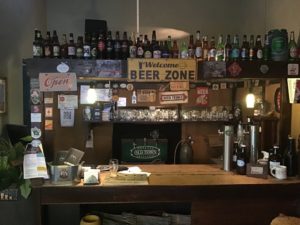 Photos. About the first thing I saw when I rolled into San Antonio de Areco was this sign. Had to stop and take a photo. I love the look on the bulldog’s face. he’s the only one who knows what’s coming! Re-fuelling salad with cerveza negra from a can. Then I found the craft beer at La Cerveceria. I did keep calm. This was the first place where I had a whole conversation with the owner and his staff, in Spanish, which wasn’t laboured. Proud as a proud thing.

Zarate was the next place, continuing north but still skirting around Buenos Aries. The wind was still against and now the temperatures were going through the roof. High thirties and zero shade on or beside the road. I was shattered and absolutely drenched in sweat when I eventually rolled into the city and I was hoping to find the first hotel on my list with a room and a cool shower would be the first thing on the agenda. No such luck. And neither the second or the third places on my list. Three more were visited and it soon became obvious that the place was very busy for whatever reason and a room would be taken at whatever cost. Screw the budget!

As luck would have it I found a place that had a room up for grabs. Unusually I was told I could view it before agreeing to take it. It was just about ok, although the price for what was on offer was a little steep. I agreed and went to get my bags off the bike. When I returned I was told a mistake had been made and I was shown a different room. It was far worse and even the lower price didn’t really compensate for the ‘downgrade’, but the city was full and I didn’t want to ride around anymore. I would have to put up with it.

Ice cream time had long gone so after a shower it was eat and drink mode. I quickly located Antares, a franchised bar I’d first found in Bahia Blanca and had a quick pint there, although my memory of their food was not great so I went looking for a place called ‘Republica’ which had great reviews regarding their menu. I wasn’t disappointed, a superb veggie burger, and their craft ales were excellent. I hoped I could alleviate the disappointment of having to go back to the room I would have to sleep in. Anyway, the next morning I would be up bright and early, have the included breakfast, and get the hell out of there. 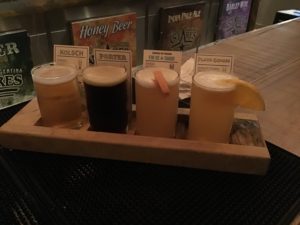 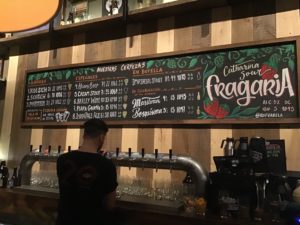 Photos. Taster tray and then the back bar in Antares.

Well the included breakfast consisted of a piece of foil wrapped sugary shite that masqueraded as cake and some black sludge in a Styrofoam cup, that was allegedly coffee, although if I had the time I would be speaking to my lawyer about that. Time to go, but after packing and being very happy to leave this hellhole, I didn’t get more than a couple of blocks down the road before feeling more than a bit ‘Tom and Dick’, sick. The forecast was for 38 degrees and my next destination was almost 90kms and I just didn’t think it was a good idea to try it, but where to stay in Zarate, when the day before it was packed. I had to look around because there was no way I was going to attempt the next part of the journey.

Just around the next corner I came across ARX Hotel, Zarate, which looked a bit out of my price range but I was not feeling well and just needed to put my feet up and get close to some air con. To hell with the price, whatever it is I’ll pay it. It turned out to be 1,850 Pesos which is about $46US or £37, way above what I usually pay, but I didn’t care. When I was shown into my room it was the best surprise I’ve had in ages. It was enormous and beautifully appointed. The only slight downside was the exercise bike! I laughed my socks off and the staff who had helped me with all my bags also saw the funny side. As soon as they had left the plug was in the bath and I was set on having, not just a soak, but a jacuzzi, and a plan was hatched, for later on when I knew I’d be feeling much better, to return to ‘Republica’.

It’s amazing how a little bit of luxury, particularly when you’re not used to it, can make you feel better. By the afternoon I was feeling much better and ice cream finished my recovery. One night of luxury before setting off to a campsite behind a gas station nearly 90kms in scorchio conditions. Back to Republica for another great feed and a couple of cheeky beers before heading back to the hotel and getting ready for an early start after a good night’s sleep. I went to bed really early and didn’t think about setting the alarm as I’ve always been good at getting up and mornings have never presented me with any problems. What happened I don’t know but when my eyes opened and I glanced at the time it was 9.08am with checkout at ten! 52 minutes is enough time to pack, but I wasn’t going anywhere without breakfast and so I quickly made the executive decision to have breakfast in a relaxed fashion and just pay for another night. 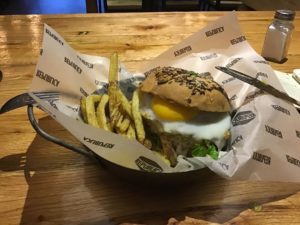 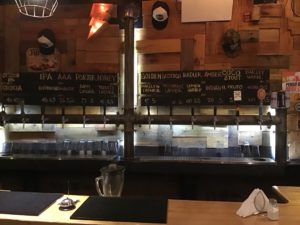 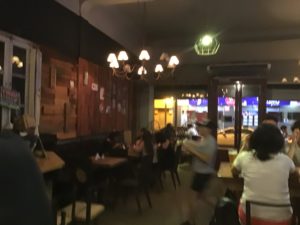 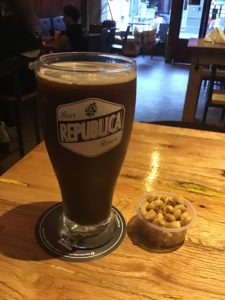 Photos. Veggie burger, back bar, the view to the front door and a pint of their very fine porter, all in Republica, Zarate.

Set off from Zarate after my two nights of luxury in some serious heat which, later in the day, was going to be in the high 30’s. Wind against, so I was expecting about 6 hours or so in the saddle. I’d checked that the two bridges I had to go over allowed bikes and all was good. Until I got to the bridges, that is, when I found out that the footpath where I had to ride was not wide enough for a fully loaded touring bike and I would have to get off and push. Even then it was a tight squeeze and I was constantly having to take care the pedals didn’t chop my legs to pieces. Each bridge was about 4kms from start to finish and took me an hour. Not a happy bunny to say the least. Halfway across the second bridge I noticed that there was zero traffic and wondered why. It turned out that it had closed for an exceptionally wide, and I’m guessing heavy, load on the biggest low loader I’ve ever seen. I got some very strange looks from the escort vehicles as I suppose I wasn’t meant to be there, and I could feel the bridge flexing as this thing went past. 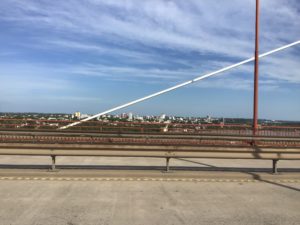 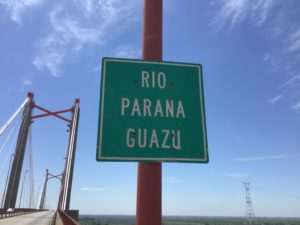 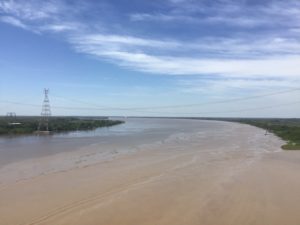 Photos. The view back to Zarate from the first bridge. The second bridge went over Rio Parana Guazu.

Eventually made it over but the time taken for the first 30kms was in excess of three and a half hours, with nearly 60kms still to go. I was going to have to get my skates on. At least in the new province of Entre Rios I got to ride on a nice wide, smooth banquina so didn’t have to worry about my mates, the truck drivers, and could get on with the serious business of turning the pedals. Frequent stops were made as I got through a staggering amount of liquid. I think, by the time I got to the gas station, I had got through over 8 litres of water and juice and I’d got rid of most of it in sweat. I made a mental note to smother whatever I ate later on with salt. It’s a good job that being closer to the capital there are far more frequent truck stops and I used most of them.

Got to the gas station and it was excellent. Friendly staff who showed me where to pitch the tent although it did lack the jacuzzi that I’d had in Zarate. I had read about this place on the internet and it didn’t disappoint, very well maintained and more than ok to stop over on the way to Gualeguaychu, my next port of call, close to the border with Uruguay. 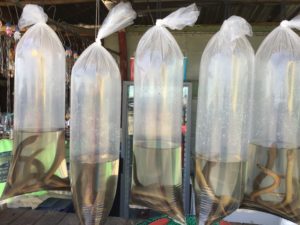 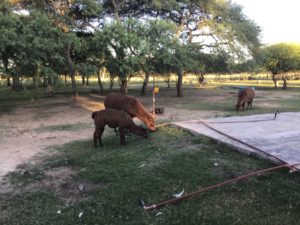 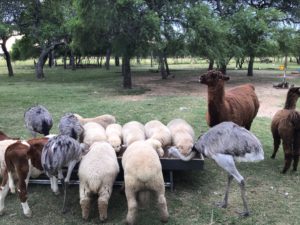 Photos. These eels were at a roadside cafe and were alive. What they were for I have no idea. ‘How do you want your eels. fried or boiled?’ Maybe. The gas station had a small petting zoo. Very busy stop, but a great place to camp, very relaxing

Anyway, that’ll do for now. As always, thank you for having the stamina to read this far and may your God go with you.