I’ve had some folks, over the last few days, rebuking me for not posting anything for some time. So sorry but I’ve been very busy sitting in a hostel staring at my laptop for the last 10 days. Initially it was about applying for jobs here teaching English. This sorry situation has come about by massive over spending on cheap craft beer, loads of ice cream and having to stay in hotels and hostels because of the lack of camping opportunities. Yes folks, I need to work and reduce the outgoings but it would appear that I’ve arrived in Montevideo just too late as all the hiring for the new academic year has been done. Luckily a guy who was staying in the hostel here told me about a website called ‘workaway’ whereby it’s possible to volunteer one’s services and skills in return for board and lodging.

First of all, I had to think long and hard about whether I had any skills or services to offer and eventually I came up with the idea of just winging it! Seriously I am looking at it in terms of me learning new skills in relation to farming, building, gardening etc. which could then take me around the world one project at a time. All it means is I keep busy doing some honest labour and it will improve my Spanish a lot quicker than spending most of the day riding a bike and practising imaginary conversations with imaginary South Americans. In addition, I will hopefully make some new and long-lasting friendships whilst being housed and fed.  Seems like a good move and so I’ve spent the last week pouring over this website looking for and applying for placements.

I had my first offer this morning and so at the end of the week I set off for Durazno, a town 2 days ride north of Montevideo to a smallholding where I will get to look after animals, repair and build fences and chicken coops all with the help of the two farm dogs who look like they will be a lot of fun. The hosts also have a bicycle shop and have told me that I can learn bike repair which I badly need to do, just in case ‘Muffin’ has any problems. I have applied for about another 5 or 6 placements which are all in a westerly direction taking me back into Argentina and across the continent through Bolivia, Peru, Ecuador before getting to Colombia. Well that’s the plan for this week anyway! The work seems to be mostly helping out at hostels with tourists, farming, construction, decorating, brewing beer (I’ve applied for a couple of those) art projects and yoga. Now I’m not going after anything to do with art as there’s not one artistic bone in my body and as for the yoga, me and pink leotards would not be a good look!

It’s been really nice here despite the hostel being a bit shabby, I’ve met some more really interesting folks. A guy from Honduras who is busking his way around the world playing a violin, a couple of girls working at the hostel on the same ‘workaway’ programme I’m now signed up for, a bunch of guys from Senegal who completely take over the hostel kitchen each day and prepare some amazing food. I went into the kitchen one day, drawn in by the incredible smells, just to have a look at what was being prepared and they invited me to take lunch with them. It was a Senegalese version of paella, that’s the best description I can come up with, complete with a huge river fish, loads of rice, vegetables and an ultra-spicy sauce which was divine and blew my socks off! 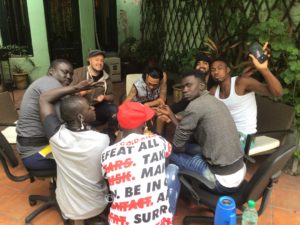 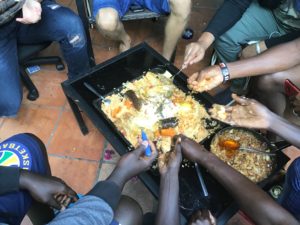 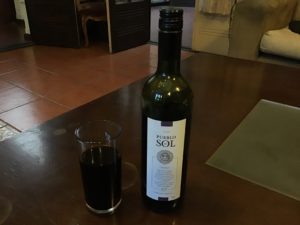 Photos. The Senegalese guys and various other foodie hangers-on. The guy on the extreme right I named ‘Boss Kitchen’ because he was an amazing cook. The guy on the extreme left I named ‘Boss Wash-Up’ as that was his job. They spoke French but I’ve obviously lost it a bit there and they had difficult to understand accents. Finally, ‘Vino Collapso’. And who says wine has to be drunk from a crystal glass? Get it down neck lad!

So, the historic city of Montevideo will not have seen much of me and I have taken very few photos. I have spent the 10 days here cooking my own food instead of going to restaurants and have continued drinking an ultra-cheap Uruguayan Red, ‘Vino Collapso’, or was it Pueblo Sol? Well at only 3 quid a bottle you can’t leave it on the shelves, can you? After 4 days here, the supermarket put it on offer and a second bottle was only about £2.30! It’s worked out that despite Uruguay being vastly more expensive than Argentina I have tightened the purse strings and spent considerably less. Now I have to hope that life in Durazno is going to be about working and not spending. We will see. 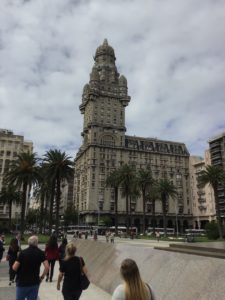 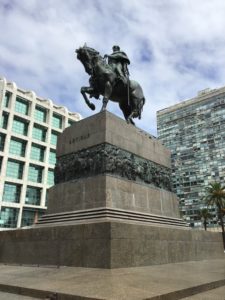 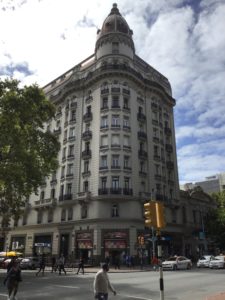 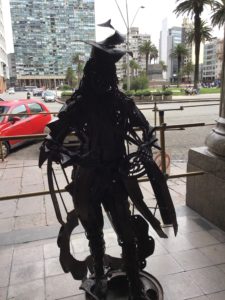 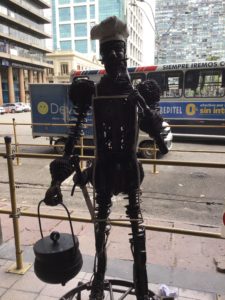 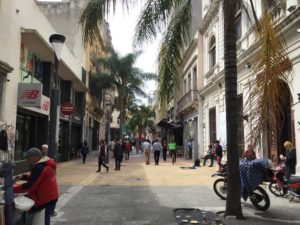 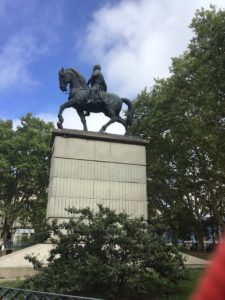 Photos. I did eventually get out into Montevideo for a walk around. Some general shots of buildings, sculptures and the mandatory heroes on horseback. Obviously since the advent of the internal combustion engine they’ve been a bit short on heroics here!

It has been good not riding for some time as the journey here was one of the worst, and I’ve hardly looked at the bike all the time I’ve been here. The 109 kms from Parque Zoo in Ecilda Paullier took me over 9 hours as it was into a 30 kph headwind all the way. When I loaded the details onto Strava it told me I had expended well over 5,000 calories! No surprise then that I can make a whole packet of chocolate biscuits and a litre of chocolate milk disappear in about 10 minutes or less. That happens more than once a day I might add! Also, I have to get through packets of crisps which I don’t really like but I need the salt to stop cramping up. Still it will be nice to be back in the saddle after a good break and with something constructive to aim for and hopefully this new part of my adventure/disaster will lead to more stuff for me to write about.

As always thank you for reading this far and may your God go with you.

Embalse to Las Flores and the border.