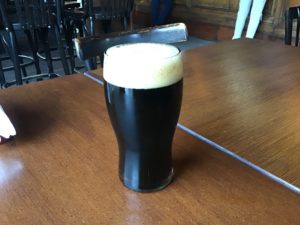 Photo. Not the oasis mentioned in the title but a great pint I discovered in Olavarria. The brewery is called Sur del Sur (south, where I’m headed) and they simply call this brew ‘Porter’. Georgeous! Can’t wait to find it more readily available.

Depending on which platform you use, Argentina is either the 8thor 10thbiggest country in the world by land area. (They can’t seem to shift Kazakhstan from 9th) Whatever, it’s enormous, and thus the distances between places are much bigger than in Europe. There, a morning in the saddle would involve 2 or 3 café con leches, and an afternoon, copious small glasses of gasolina bicicletta.

Here, a hell of a lot more planning is needed. Water is paramount of course but calories are still necessary to get from A to B. The night before each day’s trip I have to spend loads of time pouring through google maps, iOverlander, map.me et al to try and locate any and all shops, minimarkets, and gas stations en route, as possible, linking them and working out how much food and drink is required to get from one to the next. This is only going to get harder as the internet is already getting a bit naff now I’m out in the country, and there aren’t going to be places where I wild camp with good connections.

Most of the time the places I find and head for are ok, just enough to get some proteins, fats, sugars and carbs down me. Any and all! Stock up with liquid and off I go again. Have to keep moving as my original plan was to set off from Buenos Aries about 3 weeks earlier than I did as I need to make my attempt to get there at the height of Summer. I can’t afford to slack off and need to do ever bigger distances each day.

This isn’t easy as the sun here is savage! 11 years in Laos and I never covered up or used sun block. I used to swim every day, in the middle of the day, and was incredibly tanned but never got burnt. Here I wisely invested in some factor 50, (factor 51 is a bandage) and have been using it and needing to use it. I was even given a hat by a new friend in Azul, one that has a huge brim and a flap at the back to cover my neck. Hope it works?

The journey from Olavarria, south was a typical example. 34 kms in and I would supposedly stumble upon a roadside café, miles from anywhere. The hope is the place is open and I can rest and stock up on water and food. This happened and I had breakfast for the second time that day and made sure not to forget the liquid stuff. Then the next stop was another 30 kms along the same road and I had the same hopes that I could rest and revive in another half decent place.

The next place could not come sooner as I really was flagging and the wind was strengthening, not against, but across and not helping. From a long way off I spied the line of cars and a coach. That must be it. I rolled in to the car park and got the usual curious looks from everyone sitting outside. I came to a halt, turned the music off and parked the bike. Food time plus drink as it was 33 degrees in the shade and I hadn’t been in the shade! 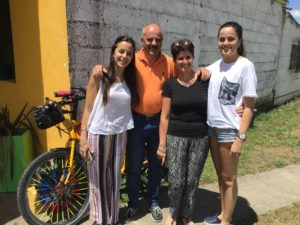 Inside was rammed and no spare seats. I got a can of gasolina bicicletta (beer) and wandered outside where there was one seat left free. That’s fine, I only need one and I sat down at a table next to some folks of my vintage and older and the usual questions were asked. I sensed the people at the next table were listening in and that was confirmed when Mum and daughter wandered over to speak with me. Mum, Karina, was learning English and she was at the same stage as I was with Spanish but daughter, Candelaria spoke English very well and they soon invited me over to their table where I was introduced to Dad, Gustavo and another daughter, Florencia who also spoke English very well.

We chatted for half an hour or so, during which time a small crowd gathered, all interested in what this old English fool was attempting. Then they left after the obligatory photos. Really nice people, shame I would never see them again, particularly as the girls had asked some off duty policia, for me, if I could camp at a police station 30 kms down the road which would save me from going another 30 kms out of my way to the next town. They said it was no problem.

My 45 minute break had now turned into an hour and I had to go. I popped my head through the door to wave goodbye to the police guys and they called me inside as the folks at the outside table I’d spoken to first were the live music entertainment for the afternoon. I had to leave and waved goodbye but as I got to the bike I thought, ‘sod it’, Ushuaia can wait’ and I headed back inside. So glad I did.

This is the link, which I hope will work? Fingers crossed!

The ‘entertainment’ was unbelievable. They played really well and from the reaction of the crowd the old guy in the hat was a bit of a comedian, although I did wonder if he was singing something like,

‘We’ve let the Gringo’s tyres down,

So now he has to stay,

I’m sure he wasn’t, the Argentinian folks are so hospitable, welcoming and genuinely friendly and interested in why I’ve come here. I hope the video has come out well and I can attach it to this post. I think I got one of the good songs, although they were all great. Real local entertainment and totally out of the blue, and miles from anywhere.

My 45 minutes eventually turned into two and a half hours and I was a bit ‘wobbly’ when I came out! Only 30 kms to the police station and I can crawl into my sleeping bag and crash out. Secretly I was hoping for a cell. Think of the photos. It didn’t happen unfortunately I stayed in the tent but with a very protective guard dog assigned to me.

Next morning, I set off for Coronel Pringles. So many of the towns here are named after Colonels and Generals it’s strange. The locals do know about the potato snack of the same name and they think it’s as funny as I do. Just hoping the poor Coronel didn’t have kids and call them, ‘Cheese and Onion, Salt and Vinegar and Smokey Bacon’, that would be too much!

Rolled into Pringles, (the pronunciation, by the way is Prin-gless, as opposed to our Prin-guls) checked into a hotel as it was a scorcher and I had got a bit of sunstroke, measures needed, showered and went out to get food. Far too early to expect a restaurant to be open so I had to make do with an ice cream. Okay! Someone’s got to do it! Then I spied a bar that was open and did food so I wandered in and placed an order and bought my first Patagonian beer, which all the Argentinians had said was the best.

I mentioned earlier that this is a big country and here I was more than 24 hours later and 120 kms away and writing this very blog when in walk Gustavo, Candelaria and Florencia! Karina was having a siesta apparently. All of us were gobsmacked at this incredible coincidence, and this time we did exchange contact details and they have subsequently invited me to visit their home in Viedma, which I had intended on going through anyway, and is about one third of the way from Buenos Aries to Ushuaia. Talk about a small world!

I left Pringles early on Xmas Eve morning heading to a wild camping spot I’d seen on iOverlander as it was about half way to Bahia Blanca and in the searing heat I didn’t feel that 125 kms was advisable. Gorgeous spot, very peaceful, but I did have a sense of I could be further down the road, although I did need to get out of the sun.

Made it to Bahia Blanca on Xmas Day, wondering what might be open for food, drink and rest. After checking google maps I was disappointed to discover that the most likely place to get some sustenance inside me was McDonalds. A bit of a bummer to say the least so I was highly delighted to spot a small shop where I loaded up and then, right across the road an ice cream shop opened it’s doors. Merry Christmas Wardy, your boat has just docked! Nice hotel just around the corner, so all was good.

Embalse to Las Flores and the border.