I was so happy to leave Hyacinth and Richard’s place. It had been a huge disappointment, and my next destination, I had decided, would be Rosario, hopefully being accepted for another, far better placement there, or maybe later on in Cordoba. My first day’s ride was going to be to a campsite almost exactly half way to Pergamino, 160 kms away. I made it to San Antonio de Areco in good time but during the last few kilometres I had started to get a serious pain in my stomach. I stopped at a supermarket to get some food as that’s normally my ‘go to’ solution for stomach pain. When I came out with the ‘goodies’ I realised my bike had slipped on the post that I’d locked it to and the chain had come off. 6 months ago, this would have been a major problem but now I was able to sort it in less than 5 minutes. As my guts were still pretty crook I decided call it a day and go to a cheap hostel. Naturally as soon as I’d checked in and paid, the pain disappeared and I would have to add the extra 40 kms to my ride the next day.

The next day 75 kms had turned into 115 and by the time I got there I was knackered. A hot shower followed by a couple of pints of porter in a bar soon sorted that out and then I ordered food. When it came I thought Hyacinth had started working in the kitchen there. It was black! I was very pissed off and using google translate asked the waitress if she would eat what was in front of me. She said she wouldn’t and I paid for the porter and left hoping that the hotel breakfast, the next morning would fill me ready for the ride to a Warmshowers host in Uranga, 90 kms further down the road to Rosario. It didn’t and for some reason I didn’t stop at a shop on my way out of town thinking I would top up with stuff on the way. Now although there were place names on google maps I hadn’t taken enough notice of what and where and I also had forgotten to top up my water bottles. Add to that the gentle headwind turning into a bloody typhoon and I was having difficulties.

My second hour in the saddle, despite working my socks off, saw me only make 8.5kms and I started to worry about getting food. As luck would have it a truck was parked at the side of the road and the driver was chatting to another driver. I stopped and was delighted to see it was an ice cream truck and probably, if it was full, had about 20 tons of the stuff inside. I asked the driver if I could buy some as I needed ‘fuel’ and he was very apologetic, telling me the smallest amount he could sell me was a full quarter kilo. ‘No problema, dos por favor’ was my reply and I paid for them and sat down at the side of the road to enjoy. He quickly came back and offered me a spoon but I was already half way through the first tub with my own spoon. I always have that at the ready!

Then I needed water as it was getting really hot but I had total faith in someone stopping and topping me up when they saw me holding water bottles at the roadside. Sure enough, two guys who were also travellers stopped and I filled both bottles and had a good drink as well. They even offered to give me an extra two litre bottle which I thanked them for but didn’t need. The typhoon started to ease off a bit and on crossing the provincial border from Buenos Aires into Santa Fe, the wind actually swung through 180 degrees and I got blown along at a fabulous rate to Uranga where I met up with Josi and Lore, not forgetting Merlin the dog, who were great hosts, taking me to a party at their friend’s house where my lack of Spanish and my veggie diet were not considered problems. 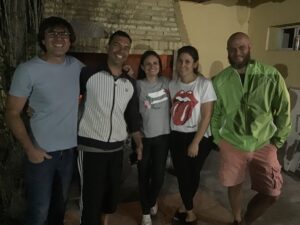 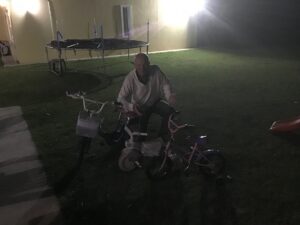 Next day I only had 48kms to go to Rosario. The road was good and I had a nice tailwind so was there very quickly. I checked into a cheap hostel as my next Warmshowers host wasn’t expecting me until the following day. I’ve never been keen on big cities but I was here and my bike was safe in the back garden of the hostel and I settled in. In the morning I set off to ride the three kilometres to Lisandro’s place and what a great guy he turned out to be. Amazing host who has done a lot of cycle touring, of Argentinian origin, and spoke wonderful English having grown up in the States. He and his fabulous girlfriend, Barbara, were planning on going to Australia to try and make a new life there but she was worried about her upcoming English exam which would determine whether she would be granted a working visa so they could stay for enough time to decide whether they would stay or not. I was really happy to be able to help her and we sat up for three hours working on her English which was more than good enough, she just needed to relax and let it flow. Waiting for her results now, as I type, and I think I’m more nervous than she is. 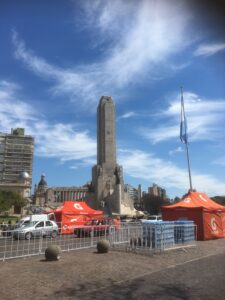 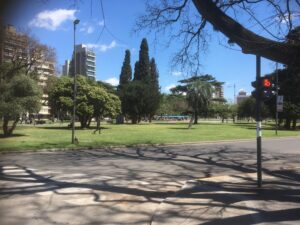 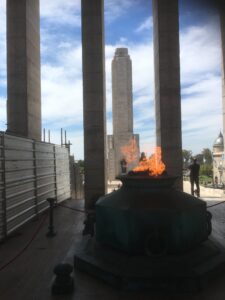 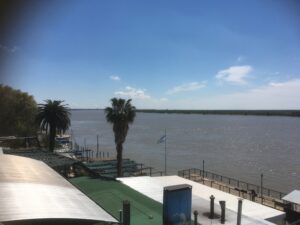 Photos. A selection of the few I took while in town.

Lisandro lived in a second-floor apartment (third for those on the other side of the pond) and my bike’s handlebars were just too wide for it to go I the lift (elevator) so we had to manhandle it up the stairs and down again whenever we went out for a ride. This would later cause a problem for me which I will explain further on in the blog. I had 4 great days there and Rosario, for the most part, is a great city with some beautiful buildings and views over the Parana River. Lisandro and I got on really well and during my time there I had applied for, and been accepted to, a Workaway placement at a hostel in Embalse which was about 5 days ride away. I then set about creating a route with places to stop along the way. For the four nights it would take me I found 3 Warmshowers hosts and only needed to stay in a hostel in one town so I was really looking forward to the trip. The first two days would be close to 100kms each but the 3rd and 4th days would be only about 65kms. Nice. 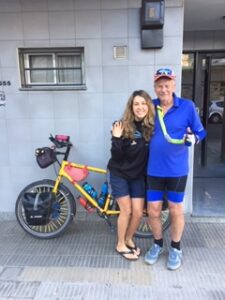 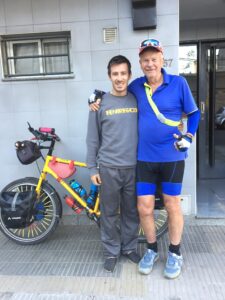 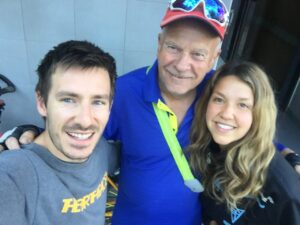 Photos. Lisandro, Barbara and me just before I set off from Rosario.

Before 9.00am on the Sunday morning we said our goodbyes and I set off with the very easy directions to get to the main road on route to Armstrong, my first overnight stop 96 kms away. I was only 3 kms down the road when I noticed in the distance the road starting to slowly bend to the left which was where I would join Avenida Eva Peron and then it was one straight road all the way to my destination. I then became aware of a guy stepping into the road about 30 metres in front of me and my first thought was along the lines of, ‘not another muppet trying to sell me shit I don’t want or need. Why can’t someone offer to sell me something useful like braces to stop my shorts slipping down from my new athletic, racing snake body’. Then I realised he wasn’t trying to sell me the usual socks or toothpaste, he was trying to sell me a gun and in a way that took high pressure salesmanship to a totally unheard-of level. It then dawned on me that he was trying to rob me.

Before I set off on my adventure/disaster I have, of course, done as much research as possible. This included reading the UK governments website with advice for travellers, including what to do when being robbed. The only problem is that it’s difficult to remember all this advice and, even if my Spanish had been good enough, I don’t think me saying, ‘excuse me senor, can you just put this robbery on hold for a moment while I consult Her Britannic Majesty’s government website about what to do now, because it might make this situation easier for both of us’, would have helped. The advice they give, which I had forgotten, is to just hand things over and don’t fight back. I definitely hadn’t remembered and I was now on instinct alone, which was all about not letting this bastard take my bike, with my whole life on it, even if he has got a gun. As my Spanish isn’t instinctive yet, I resorted to what I did know which was, the language of the street, and it would appear that he had a pretty good grasp of it because he definitely understood when I told him to go f**k himself!

This is where the manhandling of my bike up and down the stairs at Lisandro’s apartment, that I mentioned earlier, would create a problem for me. On my bike I have a frame bag containing my tools as well as my survival knife. I always keep the zip on the bag in a position whereby I can open it quickly, and with one hand. When I was attacked by the pit bull in Uruguay I was able to access my knife in about two seconds. Unfortunately, when taking the bike up and down the stairs I had closed the zip completely to stop anything falling out, and then forgotten to return it to the ‘normal’ position. So, while this bastard is waving a gun at me and trying to get me to give up the bike, which represents my whole life, I’m trying to hang onto the handlebars and get my knife out at the same time. He then seemed to realise I wasn’t going to let him take all my worldly stuff off me and he made a grab for the handlebar bag. It came off in his hand and I think as he hadn’t got the balls to pull the trigger, that enough was enough and he legged it, hoping to have hit the jackpot.

I chased after him on the bike but it’s a bike built for strength not speed and he could run like a rabbit. I soon came to a point where the asphalt stopped and turned into sand and mud and I judged that the neighbourhood was somewhere where I would quickly lose what I still had, so I abandoned the chase. He certainly had hit the jackpot from a point of view of the cash in my wallet and I sincerely hope he bought some really bad drugs and died a slow, very painful death, along with every member of his family. In the handlebar bag were my wallet with credit/debit cards, phone and passport, along with a few other far less important items. Ironically, had my journey that day been about 30kms shorter I would have been wearing my regular shorts in which I would have had my wallet and phone.

I rode back to Lisandro’s place and just before the thief switched my phone off I was able to fire off a Whatsapp message on my iPad asking to be let in. Lisandro and Barbara were relieved to see I was unhurt and got me inside and then we all started the process of getting things sorted so I could continue the adventure. But that’s for another time.