I leave Las Grutas with holes in my leg because of the mad dog, and I’m facing 120 kms to get to the next town, Sierra Grande. The only thing in between is a gas station, 32 kms from Las Grutas, which has food and drink and which I shall use for my second breakfast and a bit of a rest. Also, a place to top up with water for the remaining 88 kms. I had started reasonably early before the wind picked up and made good time, watching the kilometres pass on the road signs and on my cycle computer which has now started to behave itself at last. (I discovered that the problem was, ‘a screw loose in the operator’ whatever that is) 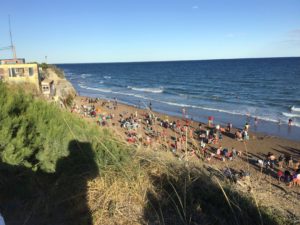 Photo. The beach at Las Grutas.

Eventually the gas station came into view which put a bit more power into my pedalling and my taste buds started getting into gear for the feast I’d been thinking/drooling about for the last 20 kms. You can imagine the stream of foul language that I used when I realised it was closed! I was furious and although I had a decent supply of food, my water was only just enough to get me to Sierra Grande if I rationed myself carefully.

I’m sure that when I checked the place out the reviews were recent. Maybe it was closed for the festive season? Maybe it was closed because it was a Friday? or maybe it had been taken over by the French? Those of you who have read my earlier blogs will remember one entitled ‘France is closed’. The decision to carry on was instant as I thought that Argentinian folks are just so nice, if I did run out of water I would only have to stand at the roadside, hold a water bottle upside down, and very soon a car would stop and help out.

There was no hesitation regarding turning around and going back, total confidence that help would be there should I need it. In fact, in only another 30 kms I noticed a van had stopped at the roadside on top of a small hill that I was about to climb and a man and woman had got out and were stretching their legs. As I got closer the man held out a peach and asked if I needed water. There again, another reason why I believe that human beings are, for the most part, very nice indeed. I know there are bad people around but if you don’t do stuff because of what might happen, you end up doing sod all. 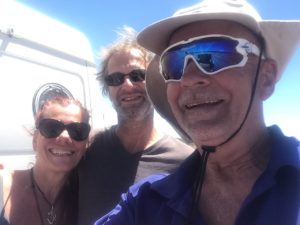 Photo. The wonderful German couple who gave me water, a peach and even a pepper spray when they heard about my mad dog encounter.

Smashing couple, and we took photos and discussed where we were going and where we’d been. They topped me up with water and a pepper spray when I told them about the scabby mutt that bit me, and we parted company. As they drove off I realised that we hadn’t exchanged names. Pity. Then, no more than 3 or 4 kms further down the road another car had stopped and I had yet another offer of water from a guy from Rio Gallegos, which, for me, was about another 2 weeks away. He gave me some badges of Las Malvinas that said, ‘Hoy y siempre, Argentinas’. ‘Today and always, Argentinas’. 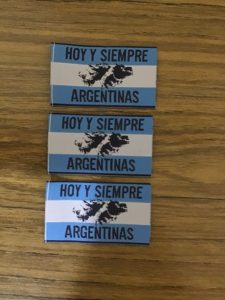 Photo. The badges given to me by the guy who stopped to ask if I needed water.

When I was about an hour from arriving in Sierra Grande I was offered water again as I was having a break with the bike propped against a crash barrier. So many nice folks. On my arrival in Sierra Grande I decided that after another long day I deserved a decent feed and I had found a place, online, 250 metres from my hotel that had great reviews. I don’t always believe stuff on the net, but I had a good feeling about this place.

Langostines with avocado and salad starter. Chicken Provencal with the biggest pile of papas fritas (chips) I’ve ever seen, plus veggies, for main and I haven’t had a desert with a meal for ages, but after 120 kms I wasn’t going to miss out on having cheesecake, and it was enormous! I just wish I had taken photos of each course but that would have slowed down the eating process. Total, $12.50 US! Well you wouldn’t put 91 octane petrol in a Ferrari would you?

I do have to remember to take pictures of some of the things I eat, particularly the amounts, but I have been laughing at folks who do that for so long it’s going to be a difficult thing to get over. I remember a Korean lady I met in Thailand some years ago, taking a picture of her meal saying she would send the picture to her husband who was in Korea, so he would be happy that she was eating properly. I said that it didn’t prove she was eating as it could be someone else’s food she’d photographed. She thought I was incredibly devious to even think of such deception. Trusting souls Koreans?

After 1 night in Sierra Grande it was time to hit the road again. My next destination was Puerto Madryn but that was 140 kms away and the forecast for wind was not good. The only place to stop for the night was an old restaurant 54 kms away, that had accommodation and food, so I decided that was the place I would aim for hoping that the remaining 86 clicks would be possible the next day.

El Empalme Argentinian restaurant was straight out of the Dickensian era. Even the lady owner looked like Bob Cratchett’s wife. But they did have food and beer, although the beer was Maltese for some strange reason, and it must have been cheap because it was not particularly good. I did help them shift a few large cans so they wouldn’t have to inflict it on too many more hapless souls. Having paid for the room and eaten I glanced outside and saw the wind had shifted and was now blowing south and with some energy. It was late by now and there was no way, even with a strong tailwind, I was going to make Puerto Madryn, so I settled down for the night and prepared for a 6.00am start before the wind, which overnight was going to shift back against me, could pick up.

Hindsight is a wonderful thing. Little did I know that another 42 kms down the road was an abandoned building that would have been perfect for wild camping and, of course, free. It would have also meant that the next day I would have only 46 kms to go to my destination. I did make that 6.00am start from El Empalme, and got 20 kms in by 7.00am so was pretty pleased with myself. Then the wind started to freshen and the next 22 kms to the abandoned building took me an hour and three quarters. Then it got serious and the next 38 kms took me almost 5 hours because of the frequent stops for rest, and a lot more in the way of bad language. 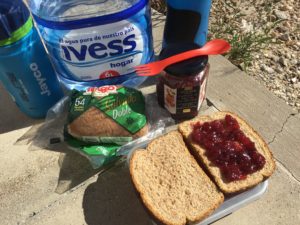 Photo. Breakfast at the abandoned building. A cycle tourist’s dream. Carbs and sugar!

There was almost nowhere to lean the bike against or sit down. At one point I just lay down in the gravel using an old lorry tyre as a pillow. The problem then was that I had to listen for traffic and wave and smile to show motorists I wasn’t dead or in trouble. (I certainly didn’t feel like smiling either) 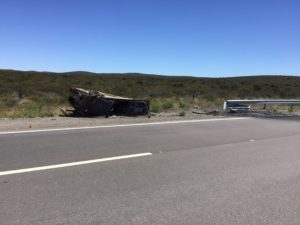 Photo. Crash barriers are what I lean the bike against and sit on to rest. Glad I wasn’t there when this car came along.

The desert vegetation has really got to me as well. Horrible thorny stuff that, in places is all over the shoulder, needs to be dodged, and is just a puncture waiting to happen. They are all lethal and yet look so nice with their cute little flowers. They don’t fool me though, little buggers. The worst are some red ones that I haven’t seen for a while but I have to keep looking out for. 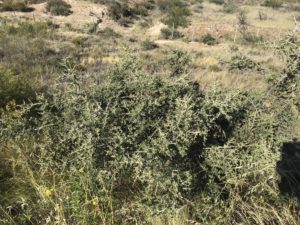 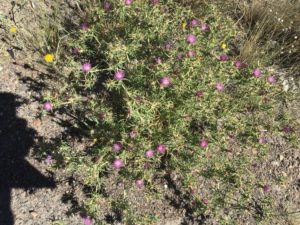 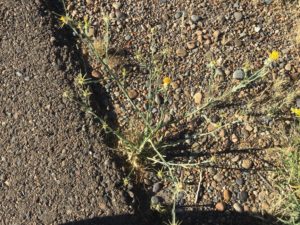 Photos. A selection of the thorny vegetation that I have grown to hate. Can’t wait to leave the desert.

Eventually I crawled into a gas station and took shelter, food and drink for 2 hours before rolling down the hill into Puerto Madryn having already decided that the town was a dump before I’d even arrived. To say I was not a happy bunny would have been the understatement of all time. I went to a hostel which was, according to google, only $23 US a night and was told it was $60. I was right the town is a dump. I did then find another hostel which was $24 but it wasn’t great. Then I headed off to an ATM to get some cash and the transaction seemed to go through ok but no cash appeared. Now I have to spend time making sure my account hasn’t been debited. Now I’m totally losing the plot.

Shit, this town really is a dump! I had decided straight away that I was leaving the next day as I didn’t want to stay here. Beer time to lift the spirits! Walked into a bar and they told me they were closed and would not open for another hour. (French effect?) Now I’m getting frustrated and then to rub salt in the wound I look across the road, which is on the sea front, and they have a Welsh flag flying next to the Argentinian standard! Really taking the mickey now.

The day from hell. It really was the first time that serious thoughts of ‘what the hell am I doing’ got into my head. I always try to be positive but that ride had given me a good kicking, just like I wanted to give the dog that bit me. The only bright side was that tomorrow could only be better. We shall see eh?