My first day in Uruguay was spent with a couple of hours at the museum at the Fray Bentos meat processing plant, which is a UNESCO World Heritage site. Very interesting but I wish I could remember more of the facts we were told by our guide who was extremely professional. That took care of the morning and I decided that the afternoon would be well spent sorting out a Uruguayan SIM card for the phone and going to an ATM to see if Nationwide would allow me to have MY money, and what I was going to be charged by the local bank for the privilege. Those of you with good memories will remember that banks in Argentina were charging me $9.50US to take out about $100US. Almost 10%, and I used the term, ‘even Dick Turpin had the decency to wear a mask’. And I couldn’t withdraw more than the $100 maximum. Later on, I did find banks that would allow me to take out the same amount, but only charge me $6.00, but after initially feeling pleased, it soon dawned on me that I was just being robbed for less!

Banco Republica, will you be kind to me? Will I be able to withdraw anything at all? Did my email to Nationwide regarding my travels, the one they warned me about, (don’t folks just hate sarcasm?) have any effect? Here goes. Well not only did the machine spit out cash at me but I think I noticed a message saying that I would only be charged 70 cents US. I’m not counting on that just yet, but I will be keen to see my account online to check what I’ve been charged. I’ve just checked and, at the time of writing I’ve been charged only for the Uruguayan pesos withdrawn! No local fee at all. Much better than in Argentina. Result!

The SIM card proved to be an issue as, not long after putting it in the phone, Whatsapp started telling me I had to register a new number. I’m sure that’s not the case but I followed the instructions to the letter and then it told me I’d done something wrong. Bugger! As far as I’m concerned, it’s all the fault of zuckerberk. (not a typo) (Shit I hate that arsehole) A whole afternoon wasted. Before I went out to get some food I decided it was the time to do my check on exchange rates to get an idea of what stuff was costing.

I was aware that the Uruguayan pesos were worth about a third more than the Argentinian peso, but would that reflect in the prices? Well you can bet your life it would. Stuff in Uruguay is priced about 30 % higher, in pesos, than in Argentina, then factor in the value being a third more and you have a situation where things are far more than 50% more expensive, sometimes almost double the price. I think my time here will be a lot less than planned. Pricing here is just eye watering and at times I feel as though I’ve taken a wrong turn somewhere and ended up in Singapore! It would also appear that I will be attempting to do a lot more wild-camping, or even pitching up at established campsites, than I did in Argentina, just to slow down the exodus of money from my account. So, the fact that withdrawing money seems, so far, to be free here, is just a ruse to put folks at their ease before clobbering them at the retailer’s till. Bugger!

One huge piece of luck I have had here already was that after my arrival in Dolores, where I had planned to pitch the tent on a peninsula by the river. It had been so hot however, and I was feeling the effects of the heat to the point of being a touch faint, that I decided to wimp out and book into a hostel for the night. After a cold shower and forty winks I felt revived and headed out to get some food and see what Dolores was like as a town.

Uruguay claims to be international and extremely cosmopolitan, particularly in Montevideo (we shall see) but what I have found so far is that the influence is very ‘French’., i.e. closed. I had to wander around town for an hour and a half before they decided they’d slept enough and were going to open the doors. ‘Caramora’ was a restaurant recommended by the hotel and had good reviews online so I turned up half an hour before their official opening time and as the door was open I wandered in. They said ok, but they would not be able to serve any food for some time. I was just happy to be able to sit down and get a drink. Eventually I ordered and during dinner the heavens opened and a monumental storm emptied itself on the town. Only one thing to do was to sit tight and have another drink, although the prices here meant I was on Fanta orange which is a first for some time! The piece of luck I mentioned earlier was that the peninsula where I would have camped was submerged by about a metre of water and all my gear would have been washed away, possibly me as well! 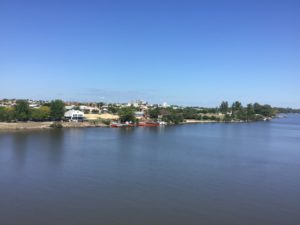 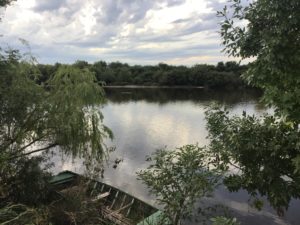 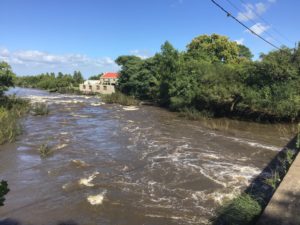 Photos. The Rio San Salvador, viewed from the bridge as I rode into Dolores. Another view close to the town centre and the peninsula where I was intending to camp. Different river but showing how much rain had fallen turning it into a torrent.

Anyway, the cost of living here is ‘through the roof’ expensive, but what about other stuff? I have to say straight away that I feel massively safer on the roads. The surface is very smooth and so far, there has, most of the time, been a good shoulder to ride on. On a number of occasions trucks have slowed down and waited for oncoming vehicles to pass before overtaking me wide and slow. Muchas gracias! I just hope that continues??? I certainly don’t get as many encouraging ‘toots’ and ‘waves’ as folks pass me as used to happen in Argentina, maybe they get a lot less tourists here because it’s so expensive? The motorists, and indeed people in general seem to be somewhat taken aback to see a madman on a bicycle and being stared at is much more common here than in Argentina but after years of living in Laos, I’m used to that anyway.

I did get to see a carnival in Carmelo while I was there. After seeing the video of Gualyguaychu’s extravaganza this was a bit disappointing to say the least. I’ve never been one for parades anyway as they bore me to tears, and the American love of marching bands I have always thought of as extreme bollocks! Carmelo’s carnival was watched by the whole town, it would appear, and they were 3 or 4 deep lining the route. I managed to find a bar where I could enjoy a beer, even though I had to apply for a mortgage to buy the stuff, and I could just walk to the door to take photos. I soon got bored with that as each group seemed to be doing the exact same thing as the group before, albeit in slightly different costumes. At least now I can say I have seen a carnival despite being a little underwhelmed. 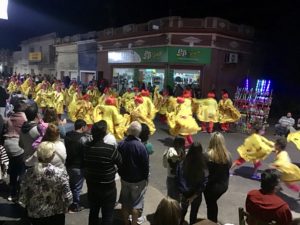 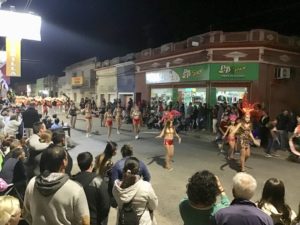 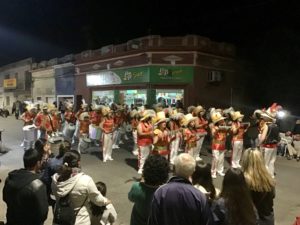 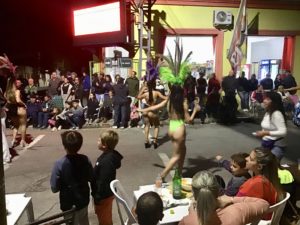 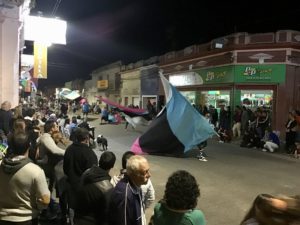 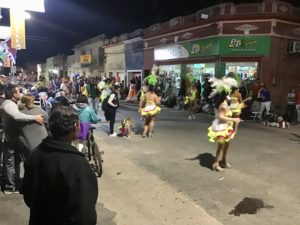 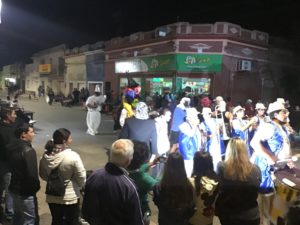 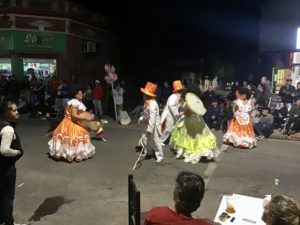 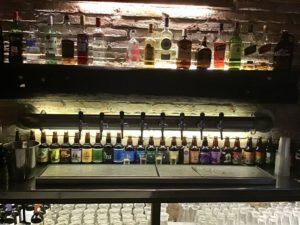 Photos. Carnival in Carmelo with the last picture showing my vantage point at the bar of Don Ramon.

As far as my Spanish is concerned I thought I was doing really well, even getting my head around the people in Gualyguaychu shortening all the words, but here in Uruguay I haven’t a clue what they’re saying. It’s almost a different language but can’t be as they seem to understand what I’m saying but when they reply to me it is so fast, and seems very different, that I hardly pick up anything. When I arrived in Carmelo, it was around noon as it was just a short ride from Nueva Palmira, and I saw a real Uruguayan ‘old man’s bar’ the sort of place I used to enjoy in Spain. I called in and there was quite some interest in the gringo and his bicycle, with a lot of questions thrown in, but their accents left me clutching at straws as to what was being asked.

At one point a fella who must have been about 80 years old and a little eccentric came in and I quickly thought of him as the town’s version of Del Boy from ‘Only Fools and Horses’. He had a small trolley with him and was trying to sell all sorts of junk and went around the bar pestering everyone. In one hand he had a box which I couldn’t work out what it was, but in the other hand he held a training shoe. NB. singular, training shoe. This got me thinking about what I could say when he offered it to me. I worked out that I could say, ‘Senor, tu tienes solamente uno zapato, pero yo necesito dos’. Translation, ‘sir, you have only one shoe but I need two’. Followed by me pointing to my feet. I thought this might get a big laugh from the assembled company, and was waiting for him to get to me. When he did I bottled out as I thought he might lose face, Asian style, and have a hissy fit. But at least I can come up with a lot more phrases now. I just have to wait for more appropriate times and things to say. 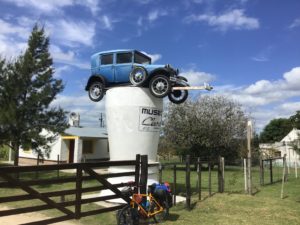 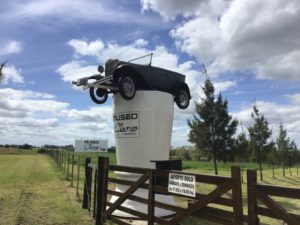 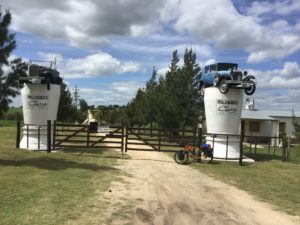 Photos. 20 kms from Colonia del Sacramento was this car museum. Being an ex-petrolhead I would have loved to look round but it only opened on the weekends. (French effect?)

On to Colonia del Sacramento and for the third day running I’m riding south, but into the wind. After 3 weeks of riding north and into headwinds I was hoping for a bit of assistance, but the weather I’m sure, is conspiring against me. Because of the price of stuff here I have a new regime regarding eating which involves cheese and tomato sandwiches, chocolate porridge and bananas, purchased from a supermarket and washed down with water. Seems a far cry from copious amounts of ice cream, lots of restaurant cooked pasta dishes, followed by craft beer. How the mighty have fallen!

Colonia is far more ‘touristy’ than anywhere I’ve yet been to in South America. Some interesting buildings for a change, and I had a nice walk around town on an enforced rest day due to the weather, which, at times, is turning cooler and wetter as the summer draws to a close. 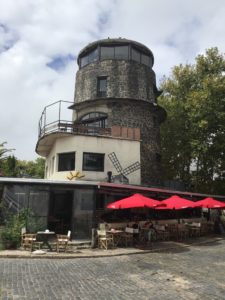 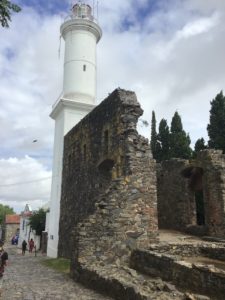 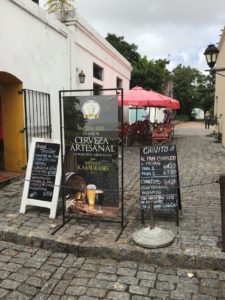 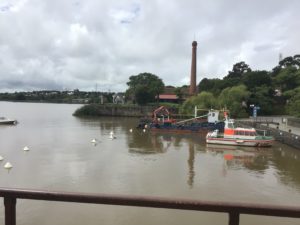 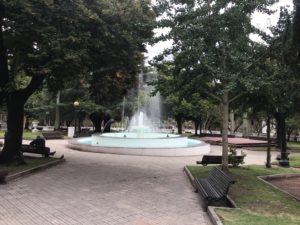 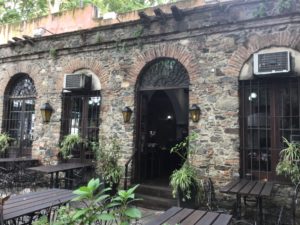 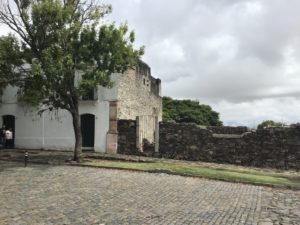 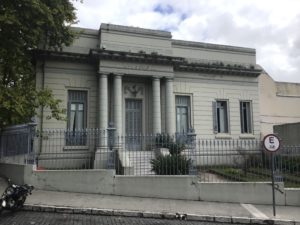 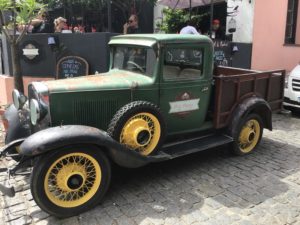 Enough for now and as always thank you for having the stamina to read this far, and may your God go with you.