I’m often asked what I think about when riding. Good question as it happens because there’s a lot of time spent turning the cranks and going slowly past everything. The mind starts to do strange things! Now before anyone gets there before me I will say straight away that those who have known me for a long time will immediately say that my mind has been doing strange things for years. So that’s cleared that one up.

I count the kilometres, when either going slowly or fast although with very different emotions depending on my speed. I think about winning the lottery and doing this on a Honda Gold Wing or in a motorhome. I think about crazy things like, ‘how fast can a fly fly?’ That one really has been thought about a lot and I’ve come up with the conclusion that the nasty bastards are the fast ones and are impossible to outrun, and the insignificant ones that fly really slowly, like mosquitoes, gave up on me a long time ago in Laos. Also, I can’t play ‘Moo’ all day, every day.

So, it’s no surprise that one day recently I started to think about corruption. It’s a worldwide pandemic as far as I’m concerned. Every politician in the world is in it for themselves and lining their own pockets, and we tend to see the third world as being worse than the developed world. Not really, it’s just that the third world look upon corruption as normal, and don’t go to great lengths to hide their thieving. Remember, I lived in Laos for over 11 years.

The reason this came up was the contrast in one, or should that be two, of my rides recently. Yes, I’ve turned around and am planning a sneaky attack on Ushuaia from a different route next summer but before that I’ve decided to head for Iguazu Falls via Uruguay and then Brazil and returning to Argentina and getting a new 90 day visa which should give me time to get to Bolivia, followed by Peru, Ecuador and then Colombia. That’s the plan for now.

Back to corruption. Heading north and I’m re tracing most of my steps to Bahia Blanca, where I am now and typing this. Some of my return journey has been a bit ‘groundhog day’, but I’ve had some great welcomes when I head back to places I’ve stayed before. Some places have turned out to be better than my first experience whilst others have not lived up to expectations. In particular I had remembered my ride from Puerto Madryn to Trelew on the best stretch of road I’ve yet encountered in Argentina. An Autovia, two lanes in each direction, separated by a 30 to 40 metres wide, piece of desert and a 4 metres wide shoulder for me to ride on. 4 metres! And as smooth as a smooth thing, complete with plenty of crash barriers for me to lean the bike against, sit down and have a break. Luxury, and I was relishing the return on the same stretch of road.

The climb out of Trelew is incredible. I forgot to check how long it is but guessing I would say it’s only 5 kms, but very steep, to the top of the hill and the start of the more gently undulating stretch of Autovia. When I got to the top I was shattered but looking forward to resting up at a crash barrier and enjoying the fabulous shoulder that meant I was well away from the trucks and cars. No crash barriers straight away but that would come and the shoulder didn’t disappoint. But. And it’s a big but. After only 2 or 3 kilometres the shoulder disappeared completely, and it didn’t return and no crash barriers either. After an hour and a half, I resorted to pushing the bike across the carriageway and leaning it against a crash barrier that was in between the two carriageways, and I sat down, drank some water and had something to eat. The looks I got from the motorists were priceless but I didn’t care. I was very close to heading all the way over to the opposite side and riding the wrong way, against the traffic, although I thought better of it as there would only be one outcome, a ride in a police car!

My conclusion, and I could imagine the scenario, was that the contractor had finished the 4 lanes of Autovia, one superb shoulder on the south bound side and all the agreed crash barriers southbound. He then has ‘greased the palm’ of some local official who in return has signed off the job as complete, and the contractor gets his final payment and immediately pulls the workforce off the job and goes to some other project leaving me as miserable as sin!

The upside was it reminded me of one of my favourite jokes of all time. When re telling this, if you consider it worthy, it is up to you to name which countries you would like to introduce into the story. I couldn’t possibly do that here with real countries, so I will have to invent 2 fictional places and they are, Livrianski and Indomalistan, and it goes like this. A world-wide summit is held bringing together the Finance Ministers of pretty much every country in the world. The FMs of Livrianski and Indomalistan meet for the first time and get on famously. Before the summit ends the Livrianskian FM invites the Indomalistani FM to visit him in his country.

The offer is accepted and 6 months later the Indomalistani FM arrives at the International airport and is met by his new friend and whisked away in a limousine to the official residence. On their arrival the Indomalistani FM is blown away by the enormous, not to mention lavish, mansion that his counterpart lives in and asks him how he can afford to live in such a beautiful place on a government minister’s salary. ‘I’ll show you in the morning’, is the answer.

The next morning, after a sumptuous breakfast they climb back into the limousine and head off into the hills. After a couple of hours, they arrive at a place with an amazing view. They get out and the Livrianskian FM says to his opposite number. ‘Do you see that 8 lane, $200 million highway stretching as far as the eye can see from the horizon on our left to the horizon on our right?’ ‘Yes’, says the Indomalistani FM, ‘I can’. The Livrianskian FM then pats his back pocket and says, ’50%’. The rest of the visit goes very well and the friendship is further cemented. Six months later the invitation is reciprocated and the Livrianskian FM duly arrives at the airport to be greeted by his Indomalistani friend. They get into a limousine and head off to the residence.

On arrival the Livrianskian FM is totally gobsmacked by the opulence of the palace before him, and gets a feeling of he must be missing something. The same question is asked regarding how a government minister could possibly afford such a palace and the same reply of, ‘I’ll show you in the morning’, comes back. The next morning, they climb into the limousine and head off into the hills and after quite some time they stop at a high vantage point and the Indomalistani FM points into the distance and says, ‘do you see that $500 million hydro electric dam over there’. The Livrianskian FM squints hard and looks all over before saying, ‘no, I don’t’. The Indomalistani FM then pats his back pocket and says, ‘100%’.

An allegedly true story regarding corruption and bribery was told to me by a guy I knew during my tenure in Laos. He was driving through central Vientiane, the capital, and was waiting at a red traffic light. Suddenly his car was rear ended with one hell of a jolt. His first thought went along the lines of now being late for an appointment and as he was about to get out and start the ‘process’ of sorting stuff out he was rear ended again! ‘Bloody hell, it’s a hit’ he thought and threw himself across the passenger seat.

Almost immediately he sensed this was somewhat overly dramatic as he wasn’t involved in anything remotely shady but, still being shaken, reached up to the rear-view mirror and adjusted it so he could see behind his car whilst still in the prone position. Behind him was a Toyota Hi Lux, very popular in Laos, with a little old Lao lady at the wheel. Somewhat relieved he got out and approached her vehicle. She was quite shaken herself, but extremely apologetic, and a sense of normality returned as she promised to get things sorted and admitted it was her fault. Later in the conversation it turned out that just 25 minutes earlier she had handed over $30,000 for the car and included in the deal was a driving license! She’d never driven before, and had enough money not to bother with trivialities like taking a driving test. The truck was an automatic and she had just temporarily forgotten which pedal made it go and which made it stop. Again, someone, somewhere was patting their back pocket.

No photos I can here you thinking. Yes, still not much to document visually here but I am really hoping that things will get more interesting as I home in on Uruguay. I’m pretty sure I’m going to cross the border very close to the city of Fray Bentos, which is apparently a UNESCO world heritage site and makes me laugh all at the same time.

My last post, entitled, ‘Mash up’ did have quite a number of pictures, one of which was the Farmacia in Coronel Pringles. Remember? When I published that post I was in Viedma, and just 3 hours after hitting the ‘publish’ button I went out for something to eat and drink and I came across this place. 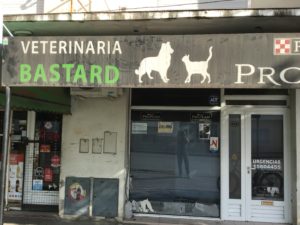 Photo. My imagination immediately went into overdrive and I imagined a conversation between a Pug and a Dalmatian going thus. Pug. ‘I bet you my vet’s worse than yours’. Dalmatian. ‘Not a chance’. Pug. ‘My vet’s got the biggest thermometers, if you know what I mean?’ Dalmatian. Look, I’m telling you, my vet’s a Bastard!

As always, thank you for reading this far and now you have an insight into the weird and wonderful things that go around in my head while I’m turning the pedals. Oh, I nearly forgot, and may your God go with you.