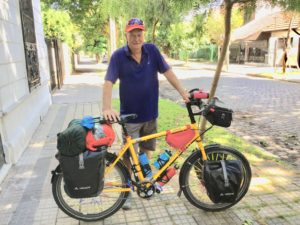 Here I am looking a bit on the nervous side before setting out from Adrogue, Buenos Aries, 15/12/2018.

So, this is it! The adventure/disaster can really start in earnest. All that faffing around in the UK, France and Spain was just a precursor, albeit some decent practise, for the real deal. South America. It’s the first time I’ve set foot on the continent and completes the ‘full house’ of all 6 continents that I’ve now visited at some point. Now before anyone starts bleating, whinging and whining, Antarctica doesn’t count. Too bloody cold for me so it just doesn’t exist, end of!

Losing my camera at Gatwick still pisses me off. Particularly as I was just about to board the plane and I had far too much to do after arriving here to go into central Buenos Aries where there might have been a decent choice for a replacement. I will now have to wait to get to Bahia Blanca, the next sizeable city on my chosen route and see what I can pick up there. I know that, so far, I haven’t done much with the camera anyway but I was waiting for my arrival here to start documenting the journey properly. The iPad and iPhone will have to make do for now.

After touchdown, 13 boring hours after take off, I got off the plane to be welcomed by an hour and a half of slowly shuffling up and down the lines waiting to present my passport to immigration. The only consolation was that the queue for Argentinian nationals was just as long and was moving just as slowly. Eventually my turn came and I placed my passport on the counter, looked at the camera and provided a fingerprint. The stamp went in the passport and I then proudly showed the officer my yellow fever vaccination certificate which research told me was absolutely essential to gain entry into any country in South America. He just waved it away and told me to go. Fine, but I do hope at some point it will be required because the injection cost me £62!

I took a taxi to my pre booked B and B in the southern suberb/town of Adrogue, chosen because of it’s close proximity to 3 bicycle shops who would be able to get me out of a hole should I fail to remember how to put the bike back together again. Don’t forget, I’m new to all this and it was going to be the first time I’d reassembled ‘Muffin’ the bike. As it happens I did a pretty good job, actually I surprised myself, but as a precaution I still took it to the nearest place where it was checked over and given a full service. On the flight it had suffered a couple of bits of damage but nothing too serious.

I had been told much of the recklessness of Argentinian drivers and my taxi ride from the airport had only sharpened that sense of trepidation for the journey ahead. Having been used to Spain, where all drivers from every country should be sent there to be shown how to respect folks on bicycles, and where I had felt totally safe, what was going to happen now? My taxi driver had two speeds. Stop and warp factor 6. I’m not sure if he’d ever used the indicators in the car before. He certainly didn’t use them once on the 25 km ride from the airport. Maybe the indicator and wipers stalks on each side of the steering column were for him to grab onto when he scared himself? He certainly scared the living shit out of me, but he seemed to be just doing his normal job! It was certainly an education.

Saturday 15th. December and I set off. My plan was to set an unambitious target of about 45 kms which would get me to the town of Brandsen, heading south. Having been given advanced warning, by a number of folks, of the terrifying lack of driving skills here I had invested in a mirror for the first time. I did however quickly find out that my taxi driver must have been a ‘one off’ as my ride out of the suburbs was pretty uneventful, and I did feel reasonably safe.

By chance I’d been accepted as a guest there by a member of WarmShowers, the first time I’d asked to use this cycle centric community to stay with local people. My host, Silvana, was a fabulous lady and she and Mum, Marta, and a whole assortment of brothers, cousins, nieces and nephews, not to mention 2 of Marta’s grandchildren had all turned up to meet the Gringo. I nearly forgot the 6 dogs and 2 cats. I was taken out for a Saturday night in Brandsen which just happened to be the town’s Christmas show, on roller skates, and a great time was had by all.

These wonderful people were so nice they invited me to stay another day and night but my schedule meant I had to go and I had been lucky enough to be accepted as a guest again at a place called San Miguel del Monte, about 60 kms this time as I decided to crank up the distances slowly. Now this ride was a lot tougher than the previous day as it was very much on the hot side and I slowly made it into town not feeling as good as I had the day before. I then had contact with my host who told me he lived another 10 kms out of town and he would come and meet me and another cyclist he was hosting in a couple of hours.

Great! A chance to sit down, relax and try my first Argentinian beer. Yes folks, 5 days and not a single beer has been had. Maybe I was just subconsciously trying to keep a clear head? 2 hours went by and I got to meet Guillermo from Brazil who was the other cyclist being hosted by Jorge, and we had a good pointing session at each other’s bikes as he spoke zero English and my Spanish, whilst coming on from a ‘directions and food’ point of view was not up to bike speak. We were quickly joined by Jorge and we set off for his house. He had warned me it was basic and the offer was a camping spot in his garden and a shower. Fine by me and muchas gracias!

Jorge’s place, in a quiet country setting, turned out to be along 8 kms of dirt track. Really hard going and not what I was hoping for after a hard ride earlier on. Eventually we arrived and the camping spot in the garden looked infinitely more appealing than Jorge’s formerly abandoned ruin. I must quantify that by saying that Jorge is an incredible guy who had just got out of the rat race in Buenos Aries and was just 2 months into his project to turn the ruin into an eco friendly house for he and his girlfriend before eventually building an hotel, also eco friendly, on the extensive piece of land he now owns.

I don’t think I’ve met a happier guy than Jorge and he is a real ‘bike guy’ who, it would seem, would do everything and anything to help another cyclist. His bed consisted of a door placed precariously on 3 chairs, with a thin mattress on top and a mosquito net nailed to the wall. The shower was a bag, hanging from a tree in the garden, behind a cloth sheet for privacy. Jorge had filled the bag and left it in the sun earlier and the water was surprisingly warm. The ‘toilet facilities’ to take a leak involved finding an appropriate place in the garden. More than a leak, if you understand, involved a visit to the ‘closet’ where instructions, had they been available would have started with, 1. Fill bucket with water, you get my drift? I must say again what a great bloke Jorge is and I would love to return some time in the future to see how his place has developed. I’m sure it will be incredible. A total gentleman and eco warrior!

We pitched our tents and Jorge prepared some wonderful grub which I couldn’t finish as I’d eaten earlier in town. We then spent several hours ‘chewing the fat’ with Jorge chatting to Guillermo in a mixture of Spanish and Portuguese, then translating to English for my benefit. Then he happened to mention the weather forecast which was not good. Rain expected. What we got that night was a storm of biblical proportions, it pissed down and blew a gale! It had me thinking, at one point, that I was glad I’d invested in a highly rated tent as there seemed to be a good chance it was going to be blown away with me in it!

The thunder and lightning, accompanied by torrential rain made me think about the state of the dirt track for our departure the next day. Both Jorge and Guillermo were riding rigs with no mudguards so they would have no serious problems, but my set up, with mudguards, meant I would quickly get clogged up and the 8 kms back to the road were, in my mind, taking on worse than marathon proportions. Morning came and the others, to my eternal relief, decided that the wind was so strong, and from the south where Guillermo and I were heading, that it would make sense to stay another day. Music to my ears! The wind then blew like mad for the next 24 hours and any further rain that had been forecast failed to materialise. Consequently, the track dried up to the point that we made it out, albeit slowly, the following morning. Phew!

I then turned a good start to the day into something special by smashing the 90 kms to Las Flores by 14.20 making it to the bank, before closing, and in time to change some of my US Dollars that no-one was interested in anywhere in France or Spain. In my first hour in Las Flores I’ve had at least half a dozen people who have seen me, a stranger, or seen my bike and worked out there’s a tourist in town, and then made a point of coming to find me and speak to me, and always in the most wonderfully friendly manner. It’s very humbling, and makes me determined to work hard at my Spanish so I can have better conversations with these incredibly hospitable people.

So that’s a start, and an insight into my first week in Argentina. First impressions are that this is an incredible place, made by the local people who have, to a man/woman made me feel so very welcome. I really am looking forward to the next 17 and a half months and I’m sure the times will be extremely tough, but at the same time unbelievably rewarding. I hope you enjoy, vicariously, my story.

As always many, many thanks for having the time and patience to read this far, and may your God go with you.

More wind trouble and then sand!