The ‘farm’ was getting on my nerves. Throughout my working life I used to crave solitude as that was a rare luxury for me. I had folks wanting a piece of me 24/7 and to be able to get home and shut the door was bloody marvellous. This was in the days before mobile phones and I was very careful to not let anyone have my home phone number except those few for whom it was absolutely vital. Now however, I experienced loneliness for the first time in my life and it was as boring as hell. Vaquita was great company but conversation with a border collie who’s not intelligent enough to know she’s a sheepdog was limited to say the least. Jonas the cycle tourist was long gone and I was bored shitless. The only good thing about being there was that I was spending very little money, but it was time to move on. I can say though, with total confidence, that I left the place in much better condition than when I arrived.

Through the ‘Workaway’ website I messaged the first people that I was hopeful of volunteering for again. They had originally replied and offered me a placement but it was after I got to Durazno and I had committed to a month there, and I stuck it out. They replied the second time very quickly and had a place for me asap and so I let Fede and Fefa know I was leaving, packed my gear, and make myself ready. Each day when I left to go to the gas station for my daily internet connection with the outside world, Vaquita, Sylvester and Adolf would watch me go with very disapproving looks on their faces. They hated me leaving but I always got a joyous reception when I returned. This time they knew something was afoot and they all watched as I loaded the bike ready for the next morning. I must admit to feeling a sense of sadness at their faces when I went out of the gate for the last time. Amazing how animals know stuff isn’t it? 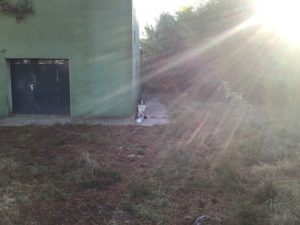 Photo. The disapproving look from, front to back, Sylvester the cat, Vaquita the collie and Adolf the chick killer.

So, my first ‘Workaway’ was a bit of a let-down. The work was easy, probably too easy, which left me too much time on my own and with no interaction with real people. Fede and Fefa, my hosts were nice enough but the food part of the arrangement was disappointing at best. Plenty of potatoes, carrots, onions and sweet potatoes but anything else I had to ask for and it came somewhat begrudgingly, if at all. No fruit for two and a half weeks says a lot. I just hope the next place will be better with more of the ‘cultural exchange’ which is a large part of the deal, along with more conversation with interesting people, and with a bit of luck my Spanish might get to another level. Time will tell.

The journey was just an ‘about turn’ and I headed south down the road I used to get to Durazno, Ruta 5, with an overnight stop at Florida, pronounced ‘Floreeda’. This time, thankfully, I was to enjoy a tailwind, not strong but at least it wasn’t in my face and I was looking forward to the ride for once. Also, a nice change to the routine if nothing else. On my arrival I checked into the same hotel that I’d stayed in on the way north and soon headed for the restaurant I’d eaten in on that same trip. My profile must be growing because as soon as I walked in the young lady behind the bar took one look at me and said, ‘Buenos noches, Abuelo Loco!’. How good is that? Fame at last! 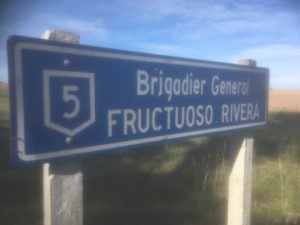 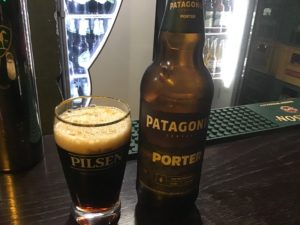 Photo. Ruta 5 is also named after another Uruguayan hero. But what a name? I bet he got the Mickey taken, big time, at school! ‘Oi, Fructuoso blah blah blah’. I can imagine it now, poor bugger. Parents, wake up and think about your child’s name! In Florida I decided to treat myself to a Patagonian Porter after month of austerity, which included NO beer, in Durazno.

The next morning, I was off bright and early and I had decided to call into the town centre of Canelones, which is about the halfway point, for a well-earned break and maybe even treat myself to my first ice cream in a month. Also, it would be a good way of avoiding the rabid pit bull that lives at the knocking shop that masquerades as a hotel by the main road. The ice cream was great even though I still cringe at prices here in Uruguay, compared to Argentina. I got going again and after another 10/12 kilometres decided, as I was so far ahead of schedule, to have a sit down, a drink and a bite to eat whilst checking the map again because I was getting close to the point where I would be leaving the main road and cutting across country, saving hopefully, 10 kilometres. As luck would have it a guy in a pickup truck offered me a lift and in no time at all we were whizzing along in the direction of Montevideo. The new plan involved Enrique, his name, dropping me off at the intersection of Rutas 5 and 102, which is the main orbital road taking traffic past Montevideo to the north of the city. It was amazing to think that just 10 minutes in the car saved me about an hour of pedalling.

I soon found the farm, coincidentally just as Matias, my new host, was going to town. He told me to go to the house and someone would show me around. An Italian ‘Workawayer’, Teresa, met me and first showed me to my ‘lodging’, none other than a converted chicken trailer which measured less than 3 metres, by even less than that! Just enough space for a double bed, (complete with mosquito net) a bedside table (small) with light and that’s about it. It was raised about a metre off the ground and completely made of wood. It had an electric cable providing power to the light and I could charge my electronics via an extension socket. It shook as I climbed the 5 steps with my gear and I wondered what it would be like to stay in. 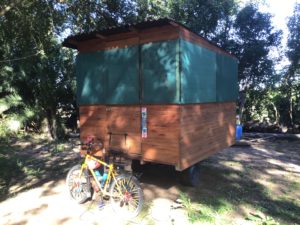 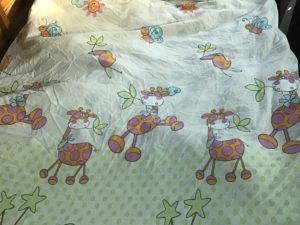 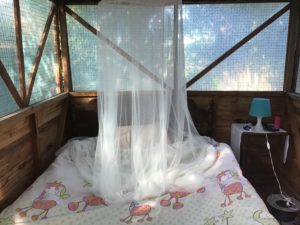 Photos. My home from home, the luxury chicken shack! Great choice of quilt for an old fella? Integral mosquito net, no less.

The host Matias, is Uruguayan, Italian and Swiss, so very confusing, and he was very welcoming, showed me around and gave me an insight into what happens here and how. His wife, Serena, and eldest son, Benicio, were away in Switzerland and he was keeping the farm going whilst also taking care of his two youngest, Ramiro (7) and Cielo (2). Great kids with loads of personality but, as always being a parent and running a business simultaneously is tough work to say the least. Been there, done that! In addition, were 2 cats and four dogs who live outside and then there was ‘Contento’ (Happy) the 8 week old Neapolitan Mastiff puppy who was as cute a puppy as I’d ever seen. He already weighed 8 kilos and would likely end up as an 80 kilo monster, like his dad! The rest of the farm was all about fruit and vegetables meaning the bonus of zero sheep shit! There were chickens but they had their own trailer and haven’t heard any noise from them at all. My first evening I got to enjoy an amazing meal which confirmed all the stuff I’d read on the ‘Workaway’ website about Matias being a great chef. I immediately thought I had landed on my feet and this placement would be infinitely better than the last. 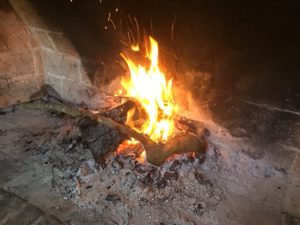 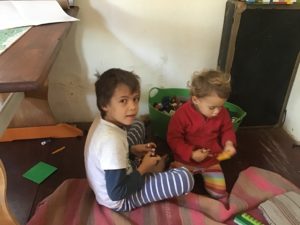 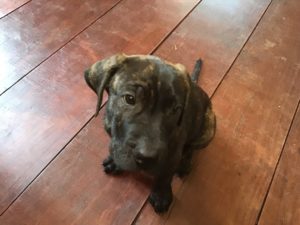 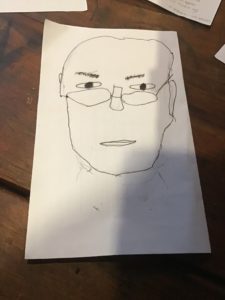 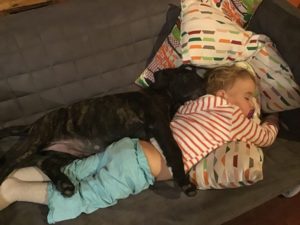 Photos. The roaring log fire which is going 24/7 in the kitchen/dining room. Ramiro and Cielo, great kids. Contento the world’s cutest puppy. Me, apparently, or according to Ramiro. Not sure on that, the jury is definitely out. In 18 months time Cielo will only just be 4 years old and yet she will be safe anywhere when Contento grows up. Great pic!

The next morning, after the best night’s sleep I’d had in years, I was given my first task. Matias showed me a pile of rusting metal that in a former life had been shelving units like a sort of ‘giant meccano set’. Then he showed me some existing shelving, of the same sort, down by the seed nursery that was being used, but in a very sorry state. My mission, should I choose to accept it, was to turn this load of rusty old crap into a beautiful shelving unit to go into the farm store. I accepted the mission but wondered if I would self-destruct within 5 seconds as DIY is not one of my strong points. 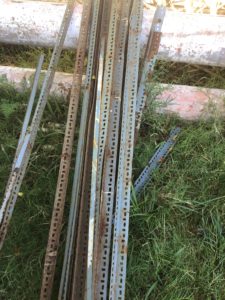 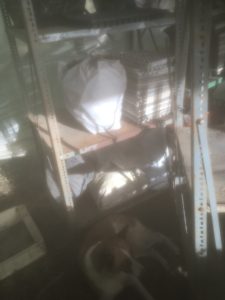 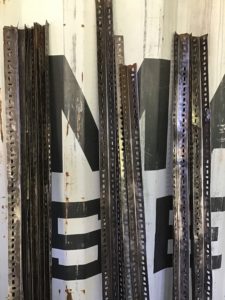 Photos. The steel I had to work with, I did let the dog go. Before and after the initial cleaning process ready for painting.

I’ve always believed that to do a job well one needs the right tools and here all the tools were present and correct, again, unlike the ‘farm’ in Durazno. I set to collecting the pieces from the giant meccano set and dismantled the stuff that had been in use, and sorted it all out. There were quite a few bolts which had totally rusted and wouldn’t shift so an angle grinder was required. I asked if one was available and ‘hey presto’ one appeared. A very good one as well! The place was growing on me. When it was all in bits it needed the rust and paint stripping off ready for painting. The grinding wheel was replaced with a steel buffing wheel and I started the hardest, and most boring part of the job. I had done scale drawings of the plan and was looking forward to the construction element but the cleaning of the metal was going to take a long time and be as boring as some bits of cycle touring and all bits of chopping wood. C’est la vie! I would just have to imagine the finished article as my inspiration to keep going.

Okay folks, that’s enough for now, things to do! Thank you as always for reading this far and may Odin, Thor and Freyr go with you.