From just the 2 cats, there are now 2 cats, 10 chicks and Vaquita the Border Collie who is great company and a real bundle of energy. The next morning Fede called in and we set off for the livestock market in the pickup. The pickup, or maybe it has something to do with Fede’s driving, has only two speeds. Sub-sonic, but only just, or stop. Fede doesn’t tend to steer, so much as aim, as if it’s a projectile rather than a means of getting, safely and in comfort, from A to B. He told me that he learned to drive in Buenos Aires aged 17 and it was dog eat dog, no-one gives an inch and there’s no respect for others. I must remember to ask if he’s related to the taxi driver who took me from the airport in Buenos Aires to my guesthouse. It also explains the behaviour of Argentinian truck drivers in particular, and Argentinian motorists in general. So far, but I’m not holding my breath, Uruguay seems a little more chilled, and the roads all seem to come with a decent shoulder for cyclists to ride on.

I was looking forward to seeing the livestock market as an experience of rural life in Uruguay, and what an experience it was. I was taken aback somewhat, as probably any city boy would be, by the way some of the animals were treated and when I saw two fully grown pigs, a sow and a boar, being dragged, with ropes tied around their upper jaws and pushed, to get them loaded onto the vehicles that would take them to their new homes, it made me think, right there and then, that I would never look at another bacon butty again, let alone eat one. 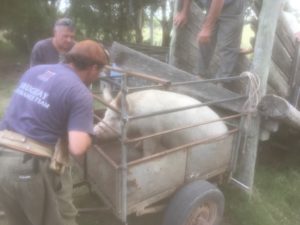 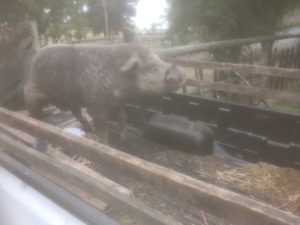 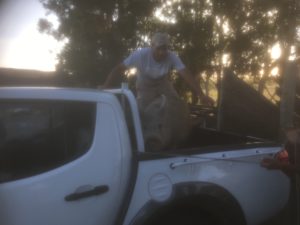 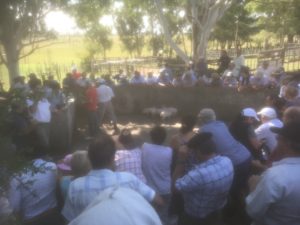 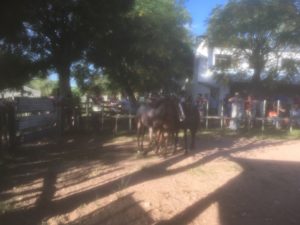 Photos. Sorry for the poor quality but I forgot the iPad and the phone had to do. Sow in a trailer. Two pics of the boar being loaded. Piglets in the small show ring. Horses in the big show ring. Rag, Tag and Bobtail going to the farm.

Fede wanted to buy some sheep to ‘mow the lawn’ at the farm and he got 3 ewes who I immediately named ‘Rag, Tag and Bobtail’. Then he bought a rooster, now called Dopiaza, which I know will be waking me up at stupid o’clock in the morning, and then 4 hens who I have named Daisy, Maisy, Hazy Fantazy and Crazy. Rag, Tag and Bobtail were hog-tied and loaded onto Fede’s Father-in-Law’s pick-up and we took Dopiaza and the hens. The sheep were settled at the farm and a makeshift fence was fashioned, in double quick time by Fede’s Father-in-Law, out of half a dozen old pallets. This would be so that they could be kept close to the house at night, safe from dogs, but herded out into the field each morning for ‘lawn maintenance’. And guess which silly bugger has to do the herding? Suddenly we’re in the pick-up again and off to Father-in-Law’s farm, just up the road. There we collect a ram who is coming to our place to ‘take care’ of the girls. I name him Seve, after the late, great Seve Ballesteros the golfer, who played with ‘Ram’ equipment for most of his career. Now we’ve gone from 2 animals to 22 in under 24 hours and I have the morning and evening duties of feeding and watering the lot of them.

This morning I herded, fed and watered them all but found that Dopiaza the rooster had escaped from the temporary coop and was wandering around ‘cock-a-doodle-dooing’, like he owned the place. Fede arrived and explained that the first job was to get the chicken coop/henhouse ready for our new feathered friends. This involved hacking a way through the undergrowth and fixing a couple of broken gates, but in an hour or so we had it ready and the transfer could begin. Now catching animals is obviously not, now, up my street. I might have been proficient at it 30 years ago when I was somewhat more agile, but not now. Also, chickens, I have decided are some of the most stupid things out there, although the sheep could easily give them a run for their money. The bloody things gave us the run around, but eventually we got them re-housed and Fede disappeared and I got in a cold shower as I was sweating like a sweaty thing. I’m hoping that I can convince him to send me on a couple of farming courses so I can learn stuff. You know, essential farming things like ‘How to really chew grass like a farmer – Advanced level’ and ‘Tractor convoy – Causing maximum chaos with a French accent’. 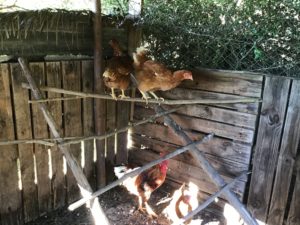 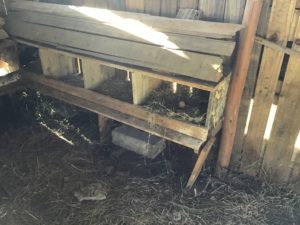 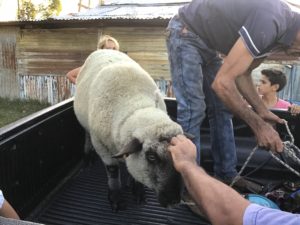 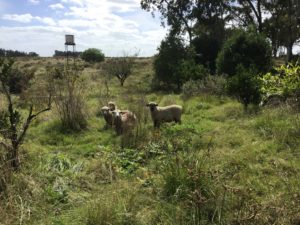 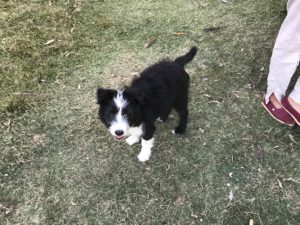 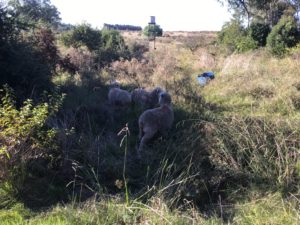 Photos. Dopiaza and the hens. The luxury henhouse. Seve the ram going to the farm in the pick-up. Seve and the ‘girls’. Father-in-Law’s cute puppy who is in training to be a proper sheep dog. Rag, Tag and Bobtail.

We are now a few days into the routines and I thought it was about time I made a progress report in respect of all the animals. First the cats. Well, cats are cats and don’t need much looking after. I check their food bowl each morning and top it up when necessary. The older one is very keen to get into the kitchen where the chicks are so I have to keep the door closed. It reminds me of Sylvester and Tweetie Pie so I’ve now named the bigger cat Sylvester. The other one is going to be called ‘Adolf’ as it’s got a black mark on it’s face like a moustache. Can’t get photos of them, they’re too quick!

The sheep seem to be learning that they are in the back garden in the day and then have to move to the front garden at night. If Vaquita the collie had a bit more nous regarding the fact that she’s a sheepdog then it would be really easy. Unfortunately, she seems to have some Cocker Spaniel in her blood and gets in the way when she should either help out with the herding or just keep away and let me get on with it. I had a Cocker Spaniel years ago and it was friendly enough but as stupid a dog as I’ve ever had. Thick as two short planks! Seve the ram, I’ve decided, is gay as he has shown no inclination regarding ‘romantic involvement’ with Rag, Tag and Bobtail despite having an enormous pair of gonads. (I must add that I wasn’t looking, it’s just hard not to notice) Fede had told me that I had to inform him of anything going on and it made me wonder if he thought I was Welsh. No Fede, I hail from Leicester, not Llandrindod Wells, and I have no ’sheep porn’ to report!

The chicks have only been here a few days but I’m amazed at how much they eat. Greedy little buggers! Their feed is expensive as well apparently and I was thinking that maybe that’s why ‘Happy meals’ are so pricey? Dopiaza, the rooster, and the hens haven’t escaped from the henhouse and the hens have started laying eggs so they must feel at home. I can feel a large cheese, tomato and onion omelette coming on.

Seve the ram didn’t stay long as he wasn’t up to the task in hand! He was taken back to Father-in-Law’s farm in disgrace.

Enough, for now, of Durazno Zoo and it’s 21 animals plus keeper. Thank you as always for reading this far and may your God go with you.