Finally, I got to leave Rosario, for the second time, to set off for Embalse and my next placement at a hostel. After the robbery Lisandro decided that because I had left quite early on a Sunday morning the lack of traffic, both motorised and pedestrian, had meant I was vulnerable to a chance encounter with the bastard that I did bump into. My new departure would, we decided, be on a weekday when there would be lots going on, and also Lisandro said he would ride with me to the outskirts of the city. This time there were no issues although I must admit to getting a bit ‘twitchy’ when we approached the place where I was robbed. The frame bag on my bike where my survival knife is kept was halfway open and I could have it out, and unsheathed, in a flash.

Because of my financial situation, i.e. having $200 to last me until my credit/debit cards arrived from the UK, I had to be very careful with my spending as I had been told all sorts about how long a letter would take to get to Argentina. It would have to be emblazoned with ‘solo documentos, nada valor’ which means ‘documents only, no value’ to keep the thieving customs folks from seeing what can be ‘appropriated’, but even so I was not optimistic that it would be a speedy process. I had therefore planned my route, which would take 5 days, around as many ‘Warmshowers’ hosts as possible. (Warmshowers is the cycling specific version of Couchsurfing, which seems to be well known) 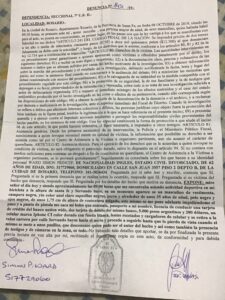 Photo. In a country obsessed with identification, this was all I had. The police report detailing the robbery and loss of my passport. I had to show this document before I was able to buy a train ticket.

My first hosts were in a town called Armstrong and it would be 96 kms and according to the weather forecast, into the wind. When I arrived there, I was cramping up in way I’d never experienced before. Fortunately, Gilberto was quickly there and started filling me up with water, coffee and cakes. A great start! These guys offer, on their host profile, a place to pitch a tent, a hot shower and free food and drink in return for the kindness and hospitality they’ve received when travelling all over the Americas, from Alaska to Ushuaia. Their hospitality exceeded their promises on the Warmshowers website and I cannot thank them enough. Ironically they soon discovered I like beer and promptly a pint was placed in front of me, but the irony is that when I was in a situation where no payment was required, and it wasn’t a sponsored bash, just the good nature of folks, I didn’t want to abuse their kindness so I drank at an unusually slow pace. In my desire to speed up I offered to pay but they wouldn’t have it so I drank at, for me, a snail’s pace! 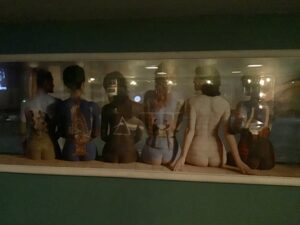 Photo. Amazing framed poster on the wall at the bar in Armstrong. Shame I couldn’t get a better picture. On the back of each of the attractive young ladies (Am I allowed to say that these days?) is the artwork from a Pink Floyd album.

Next day was 115 kms to the town of Belle Ville. This was the only place where I would have to use a hotel but it was very nice and very cheap. The night I was there I wanted to listen to the Rugby World Cup quarter final between England and Australia but the wi-fi didn’t work in my room meaning I had to get up at stupid o’clock and sit outside reception trying not to disturb anyone. I shouldn’t have worried as I soon found out that I was the only guest there that night. Next morning the breakfast was all about the Argentinian sweet tooth and consisted solely of Danish style pastries. As I was the only guest I think the hotel owner thought that he and his family would be tucking into all that was left, and it would be a substantial amount. It wasn’t after I’d scoffed 11 pastries! Washed down with 3 cups of coffee and a flagon of orange juice. Well if they leave it out I’m going to eat it………. 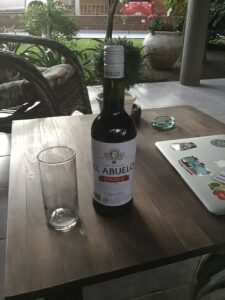 Photo. In preparation for listening to the match I had decided to pick up a bottle of red wine. Not paying enough attention to the contents I picked this one because of the name. ‘El Abuelo’. When I opened it I had a bit of a surprise because it was port! No worries, it still went down the same way. 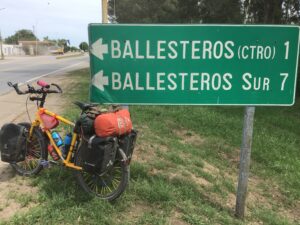 Photo. Halfway between Belle Ville and Villa Maria was the village of Ballesteros. Made me think of the late great Severiano.

Villa Maria was my next port of call, a leisurely 65 kms away and what turned out to be a student house. The guys were incredibly welcoming but it was obvious that no-one was responsible for tidying up and cleaning was definitely a no-no. As a long-time fan of the old sitcom ‘The Young Ones’ I half expected Ade Edmondson to come crashing through a wall at any moment. My sleeping place was sort of a cupboard, but all was good and I slept like the proverbial log and was off bright and early the next morning, destination Hernando, the provincial capital of peanuts, another 65 km jaunt, and with a tailwind for the first half of the journey. I arrived and was met by Jorge who offered a place to pitch the tent on his immaculate back lawn. I had a great evening with Jorge and his family and in the morning set off on the final leg of this trip to Embalse and my next Workaway placement. Jorge messaged me later and told me that I was the inspiration he needed to finally go on a long tour, something he’d been putting off for quite some time. 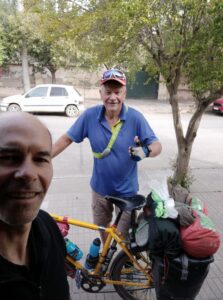 Embalse was 80 kms away and the last part was going to involve some reasonably serious climbing and by the time I got there I was ready to leave the bike alone for a while and get stuck into whatever Manolo my host had in store for me. It certainly was a beautiful setting, lakeside and the front of ‘El Bungalow del Ministro’ faced the lake and the setting sun. I didn’t know it at the time but I would be there for 7 weeks waiting for my passport and credit/debit cards to arrive, all the while surviving on the $200 I’d kept hidden in my shoes.

But that will be for another time. As always thanks for reading this far and may the Flying Spaghetti Monster go with you.