Las Grutas turned out to be a nice town, obviously very popular with Argentinians as a holiday beach resort right on the South Atlantic coast and, as it was high season, it was heaving. In some ways it had the expected Latin charm, but there was an element of British seaside resort about the place. The temperature was the big giveaway! Loads of shops selling the usual plastic buckets and spades, folks taking their beach chairs down to the ‘playa’, many using small trollies to transport 3 or 4 chairs at once, without having to carry them. I’d not seen those before. About the only thing missing were ‘kiss me quick’ hats!

One other difference to a British seaside resort is that Argentinians are nearly always seen carrying a thermos flask. Almost like the French carrying a baguette to signify their nationality. Here the thermos, despite the heat, carries hot water and is for the local obsession with a drink called Mate. It’s similar to tea but quite bitter, otherwise tasting like green tea, and has about 3 times the caffeine. A cup is packed with finely chopped Yerba Mate leaves, hot water is added and it’s then drunk through a metal ‘straw’ with a filter on the end. Quite strange, but this is a habit even more common than eating ice cream which, here, is definitely saying something.

One experience here, and I’ve been putting it off for as long as possible by using my supply of US Dollars, was queueing for an ATM. The few I’d tried in small towns and villages, where the queues were not too bad, all refused to work and when this happened for the umpteenth time in Coronel Pringles I, after a couple or three beers, fired off a slightly rude and very sarcastic email to my bank asking why my cards were blocked despite me informing them more than once of my visit here. As expected I got the reply telling me I was a very naughty boy and if I used offensive language again (it wasn’t, it was sarcastic) the messaging service would be withdrawn and I would have to use the phone. One very smacked arse!

Anyway, Las Grutas, Banco de Patagonia, and the queue for the 2 ATMs was about 30 people. (On the positive side, ATMs are easy to find. Just look for a shit load of folks standing in line!) Then, not long after I had to join in as I was down to my last 300 pesos, about 7 quid, one ATM ran out of money! Eventually, 40 minutes after joining the ‘shuffle’, it got to my turn. All that time and I still wasn’t sure if things would work and I would get some cash, and a sense of impending meltdown was weighing heavily on my shoulders.

The relief when my PIN was accepted was enormous and only subsided slightly when the screen informed me that the venerable (or was that venereal?) Banco de Patagonia was going to charge me $9.50US for the privilege of using the service. The thought, ‘at least Dick Turpin had the decency to wear a mask’ came to mind. Although now I had some cash I could celebrate in the nearest ice cream shop.

A great thing I’ve found here is a bike shop. Hoping to be able to pick up a pair of thin cycling gloves to keep the sun off my hands which are burnt to a crisp despite liberal use of factor 50. (Factor 51 is a bandage!) I’ve had to resort, when riding, to using the arm warmers and leg warmers that I have, ready for when I’m further south and it starts getting a bit nippy, as protection from the sun, and the look is not good! Hopefully I’m very good at self-deprecation, why change the habit of a lifetime, and it will give everyone a good laugh at my expense? Maybe I have an alternative career as a style guru waiting? Many thanks to Bruno, who I met in Azul, for the hat. An absolute lifesaver! 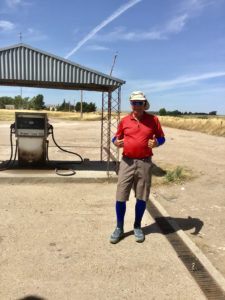 Photo. The anti-sun get-up, which is essential, and of course massively attractive. So much so that I’m thinking of setting up a fashion house. This could be one from the ‘Nomad Cute’ collection. 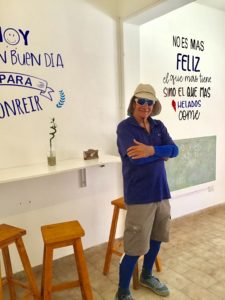 Photo. Couldn’t leave you frustrated with just one pic of this stuff. This is ‘Nomad Cute Blue’. 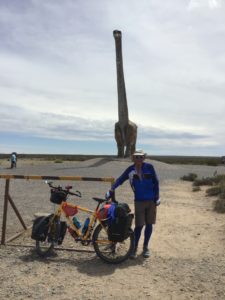 Photo. Now I’m dressed for pantomime, what’s the Spanish for ‘behind you?!’. This was taken a few days after Las Grutas entering a place called Trelew but as I was showing off the new fashion collection, I thought why not? Shame the guy who took the photo didn’t get more side on to show off the dinosaur! First interesting bit of Argentinian landscape so far.

Mentioning alternative careers, I’m reminded of a true story from the time when I lived in Laos and I had to have an abdominal hernia sorted out. I had some low-level health insurance cover and my work at the time was pretty non-existent, so I decided to get it sorted. I had a consultation at a hospital across the border in Thailand, and a date was set for surgery. The operation was done and I was discharged the next morning armed with a total over supply of medication, which cost an arm and a leg, and told to return in 2 weeks to have the stitches out.

When the time came I thought, ‘sod that’, I can do without the journey, not to mention the extortionate expense of the additional medication they will prescribe for me which I don’t need. I then decided to go and see my local General Practitioner in Vientiane, and also my good friend Jean-Marie, who also happens to be the Honorary Belgian Consul to Laos.

Now I’d known Jean-Marie at this time for about 7 or 8 years and we got on extremely well and he knew all about my, at times, madcap sense of humour. I lay on the couch and he started removing the stitches. He also made a comment that the surgeon had not been kind in respect of me having such a big and unsightly scar. Now, I’m a bloke so it didn’t bother me at all, but as he took out the last of the 10 stitches I made the remark of, ‘well that’s the end of that, isn’t it?’ ‘The end of what’ Jean-Marie asked. ‘The end of my new career as a swimwear model, that’s what’. It took him a moment but he realised I was just being me and shook his head as if to say, ‘he’s definitely lost it now’.

Another time in Jean-Marie’s surgery when I’d called in to have some shots just before leaving Laos I told him I’d solved the issue of me, at the time carrying a few extra kilos, and having a Body Mass Index which put me, just, in the ‘overweight’ category. BMI, for those who are unaware, is all about how tall you are in relation to your weight. Hearing that I’d cracked this problem, Jean-Marie was all ears waiting for my new discovery. ‘It’s very easy Doc, I haven’t got to lose weight, I’ve just got to grow about 8 centimetres taller!’ This time he knew for certain I had lost it big time.

Back to Las Grutas. I stayed 2 nights because of the forecast for strong headwinds, which turned out to be nonsense. No worries, I’d found a great little bar selling a good selection of craft beers so an extra night was not a problem. The staff there were great and they played some excellent music. When I complimented them on this they asked me to recommend some stuff for them as they have a liking for British music but there’s a lot of it they’re unaware of. I introduced them to Free, Frankie goes to Hollywood, The Jezebels, although they’re an Aussie band, and The Sensational Alex Harvey Band, and a great time was had by all. 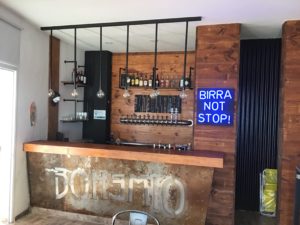 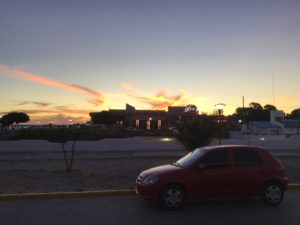 Photo. Oops. This is the sunset, the previous one was of the bar, Bohemio, that was excellent.

Time to go back to the hostel and I was going to stop and take some last photos of the town when a mangy, cyclist hating, gringo hating dog decided to take a chunk out of my leg! Now I love dogs but this brought on the red mist and it was only the intervention of a large crowd of Argentinians keeping me away from the mutt that saved it getting a bloody good kick, which it well deserved. Photos of the town quickly forgotten. 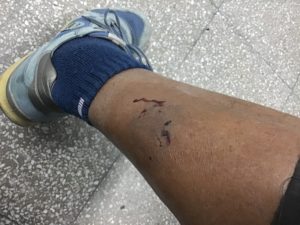 Photo. The holes in my leg from the scabby mutt.

The next morning and it was time to leave for Sierra Grande a bit of a daunting prospect as it was 120 kms away and the winds would be light, but against. But that’s for another time.