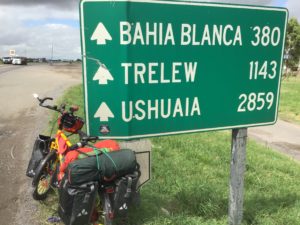 Photo. Now they’re really having a laugh! Maybe it’s a hint that I should stop getting off the bike to take photos and get a move on?

One of the most common questions I’m asked by people curious as to why an old git like me is doing what he’s doing, is how far I travel each day. It’s almost impossible to say as there are so many variables that can have a massive effect on one’s progress. I have often wondered about which conditions I would prefer and in what order. By conditions I mean wind, gradient, road surface, temperature, humidity etc etc.

My ‘list’ of conditions changed during the second 30 kms of my journey from Cachari to Azul. The first part of the ride had been superb, and I whizzed along turning the cranks almost effortlessly and eating up the road. Then it happened. The banquina disappeared. Banquina is the word for shoulder and the bit where we cyclists can put a bit of distance between ourselves and the cars and, more particularly the trucks.

The last thing I purchased before leaving Europe was a mirror to let me have some sort of view of what’s behind me without having to turn my head and possibly swerve out into the road. It’s really important here as there’s a very different mindset for Argentinian truck drivers over the French and Spanish.

In Spain in particular, but also in France, if two trucks are going in opposite directions and are going to pass each other and a cyclist is on the carriageway and all 3 are going to meet at the same time, the truck coming from behind the cyclist will slow down, wait for the other truck to pass and then overtake the cyclist wide and slow. I always acknowledge this with a ‘thank you’ wave.

Here the truck drivers will generally give you room but not if something’s coming the other way. In that situation it’s up to me to get out of the way, because they are absolutely not prepared to slow down and lose momentum. They will often give a toot on the horn that doesn’t sound aggressive but it’s very definitely translates to ‘let’s stay friends, I don’t want to run you over, so get out of my way sunshine, or else’. Their obligation seems to be just to miss you, and then all is good. But I’m sure that their thoughts go along the lines of a miss is a miss. 1cm is a miss, just as 50cm is a miss.

Now if there’s a nice wide shoulder then I can get well away from them, be very relaxed, get the sounds on, turn the cranks and think nice things. When the banquina disappears I have to slow down, turn off the music, my grip on the handlebars tightens and things start to get rather fraught.

Also, drivers here don’t indicate when they are pulling out to overtake as they do in Europe. This means that where the first driver in a convoy will pull out, but without indicating, the drivers following don’t know why and stay where they are. They probably think they’re following a driver texting or doing the ‘Zuckerberg shuffle’ as I call it. (fb) Unfortunately my mirror is not able to identify a convoy coming up behind me so I am often taken by surprise when the first truck gives me room but the next two or three pass very close causing enormous tension and consequent buttock clenching.

Also, I really am not a fan of riding into the wind. I’ve not had much experience yet, and I’m aware that Patagonia is going to be hell from that perspective, but give me a hill/mountain any day. When faced with a steep uphill stretch I’m quite happy to get off the bike and push. My theory is I can give my cycling muscles a rest and my walking/pushing muscles can get a bit of a workout.

Thirdly, a good surface to ride on is a real bonus. There’s nothing worse than bouncing up and down all day. It slows progress and it’s just very uncomfortable in the butt department. It makes a hell of a difference, sometimes 10 kph, to the speed I’m able to go, and with my need to crank up the daily distances travelled if I’m going to get to Ushuaia I need all the help I can get.

In order of preference for a great ride, I have to go for 1. A nice wide banquina/shoulder. 2. A really smooth surface. 3. No wind or a tailwind. 4. A flat road or gentle descent. 5. Temperature in the mid 20’s. 6. Nice places to stop, chill and relax on the way.

The answer to the ‘how far do you go in a day’ question can be anywhere between 50 kms. and 150 kms. I haven’t done 150 kms in a day yet, but I’m confident, given the right conditions, that I can smash that out without problem, although I know that days like that are going to be few and far between.

One thing that came as a surprise on today’s ride was, just after a toll booth, (I don’t pay, definitely not having that!) I came across a sign that told me bicycles were not allowed on the road. Now had I been a law-abiding citizen I would have had to cross the road and ride 25 kms back from where I’d come from as there was no alternative. You can hazard a guess as to whether I was going to be a law-abiding citizen or not. You got it, I ignored the bloody thing and carried on, keeping on the banquina, so that if I had an encounter with the local constabulary I could/would have argued that I wasn’t on the road anyway and they should leave me alone!

Now this stretch of shoulder was bloody awful and I was glad to see a gas station in the distance where I could take a break. As I got closer I could see cars turning off the road to the right and I remembered another route to Olavarria, my destination for the day. 500 metres from the gas station there was another sign prohibiting bicycles from this stretch of road. Surprise, surprise, I ignored it.

Had a bite to eat at the gas station and reassessed my route. No worries, just a slight detour and lo and behold, a great piece of road, smooth as a smooth thing, and all was good again. Then, all of a sudden, and for no apparent reason there was another sign prohibiting bicycles. This time on a small country road, and it made no sense at all. I re confirmed my status as not a law-abiding citizen and carried on. 500 metres later, and still on the same road is a dedicated cycle path! Now I’m confused.

Got to Olavarria without problems from the law enforcement agencies and found a very nice, and very cheap hotel with a little family run restaurant, 50 metres away, that has the most amazing reviews I think I’ve ever read. I could enjoy this place! Also, the weather forecast is a lot better, albeit the wind direction could do with shifting 180 degrees.

Before you ask about why I have a tent and why I’m staying in hotels, I have to add that there is pretty much a zero chance of finding a decent and safe wild camping place here. However, today, way off in the distance I did spot some hills/mountains which tells me I’m about to leave the pampas and get into the sort of places where I can find good places to wild camp which reduces the cost of the whole adventure but also means I can ride further each day and not have to rely on finding a place to stay in a town or village which may be some distance short of where I’m capable of getting to.

Okay, enough for now. As always, thanks for reading this far and may your God go with you.