Bahia Creek was a tiny village with a beach that came all the way from where it was supposed to be, by the sea, and covered the whole place. Just so sick of this stuff and I want OUT! The people, as ever, were great though, and the lady who ran the campsite went out of her way to find some locals who spoke English and could possibly get me a ride to Viedma which was now 90 kms away and still on ‘ripio’ the gravel road that I had come to hate. If no ride was to be forthcoming the thought that at least the direction of travel was away from the beach gave me a feeling that it might not be as bad as it had been to get here.

The folks I was introduced to were absolutely charming and invited me to dinner and I got to meet all the guests at the hostel who had given the standing ovation when I went past earlier in the day with Senor Grader, complete with bike loaded on the back of the machine. Two of the guys told me they had ridden the same bit of the route on bikes a couple of years earlier, but I’m sure the problem with sand would not have been as bad as it was now, and when they showed me some photos it was obvious they were not touring, and therefore not loaded up with luggage. It’s just not the same guys!

The family arrived who’d invited me to dinner and we had great food and some, for me anyway, well deserved beer, but I was told that no-one was going to Viedma the next day. It didn’t matter though as I was assured the route to La Loberia was completely sand free. I was extremely sceptical about this after the awful experience I’d endured earlier that day but the gentleman telling me this was very convincing and I decided to take his word for it and go to La Loberia, maybe arriving in a good frame of mind and able to enjoy their magnificent beach. Fingers crossed…………

Photo. Before the road turned into beach. The only tree I saw all day and it was about 4 feet high.

Maybe I didn’t cross enough fingers but after about 30 of the 70 kms I had to do the ripio turned to beach again and my complete meltdown in the middle of nowhere was heard by nobody. It was a good job too as my language was appalling, not even close to being repeated here as some of you may be of a delicate disposition? A couple of cars did stop to ask if I needed help, which I did, but all were going in the wrong direction. I had got enough food and water, but everything else was totally not good. I wanted the guy who had convinced me that this was the way to go to appear immediately, although what I would have done to him doesn’t bear thinking about!

I struggled on, some places I could ride but all too quickly the sand returned and I had to push again. I mustered another 13 kms or so in about an hour and a half, but things were not at all good. By this time I had taken to riding in the centre of the route, where possible, just in case a suitable car or truck did come from behind and would have to let me know it was there and maybe, just maybe, I might be able to get a lift and end this torture. On one of the bits of surface that I could ride I was giving it so much effort and attention that I hadn’t heard two vehicles behind me. Unfortunately, at this point I was keeping to the side of the road where it was just possible to keep cycling and the first one passed me without seeing my frantic, but too late, thumbs out signal hoping that I could get a lift. It was a van too and likely that the bike could go inside. Luckily the second vehicle did see me and sensed something wasn’t right and stopped to see if they could help.

I was so tired and fed up that my Spanish seemed to desert me and all I could say was that I needed help, the road was impossible, and the van might have stopped to help. As luck would have I didn’t say too much about what I was thinking of the van driver at that moment because it turned out that the lady I was speaking to was the driver’s girlfriend and she set off after him and sent him back to help me out! So, I got yet another lift which was very much needed as the rest of the route, all 27kms of it, would have probably been the end of me. On arriving in La Loberia, very relieved and very grateful I got the usual photos of my new knight in shining armour, but again I’ve forgotten his name, and was very happy to see the start of an asphalt road that apparently went all the way to El Condor, 30 kms away, and then Viedma, which I considered to be back to civilisation. 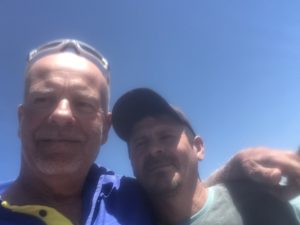 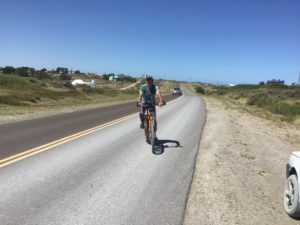 Photos. The van driver who rescued me and his go on the bike while I was sorting all my bags out. Great fella! Late editorial addition as I’ve just remembered his name……Sergio, muchas gracias mi amigo.

Naturally the first folks I encountered in La Loberia insisted I went to see the beach! I did manage to keep my cool, but it wasn’t easy I can assure you. I followed signs for the ‘restaurant’ and found it was just a food truck offering burgers, but they could offer beer, and it was super cold, as well as a chair. I parked myself and ordered a cold one. It was run by two brothers, Silvio and Juan Carlo who were great fun, and my relief at not pushing the bike through sand and possibly seeing light at the end of the tunnel in the form of an asphalt road, meant that I decided I was going to ‘blow the froth off a few’, and I did just that!

The brothers were brilliant and picked my mood up very quickly. (The beer helped) They were very interested in the bike and I soon was asked to put the speaker on and we had my music blaring out at full volume. They also thought it was great that I call myself ‘Abuelo Loco’, ‘Crazy Grandpa’. We had lots of laughs, and my exertions of the past few days were soon, not forgotten exactly, but were becoming less painful. That was until I suffered a massive bout of cramp, the first time that had happened since the early days back in France. I then realised just how tough things had been, and how much worse it might have become with my knights in shining armour, Grader man and Sergio, helping me out two days running. 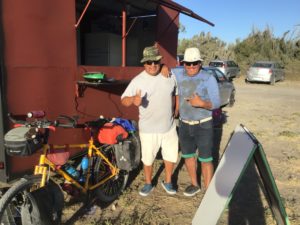 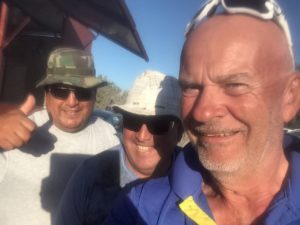 Photos. Silvio and Juan Carlo who ran the food truck. Great guys who lifted my mood massively. So much for the beach, the tide was in!

After half a dozen cans of super cold beer that turned out to be the same brand of Maltese stuff I’d had at El Empalme a few days earlier, I decided that I had better get to the campsite to pitch the tent and think about getting some sleep, looking forward to the next day’s easy ride to El Condor on a proper road surface, as well as the prospect of treating myself to a hotel, with a bed and a decent shower instead of the campsite showers that I tended to shun because after showering in some of these places I would be wanting to find somewhere else to get clean!

I got myself booked into the campsite, pitched the tent and returned to the ‘office’ which had wi-fi, although it was on the pathetic side of useless. They did have beer though so, not wanting to be unsociable, I blew the froth off a couple more before deciding to turn in for the night. Now when I pitched the tent I had noticed there was a tent on the next pitch, but there was nobody around and all was quiet. On my return from the office a full blown ‘rave’ was under way with 3 Argentine couples, all in their twenties, who were in full on party mode and so the chance of any sleep was non-existent. Well, if you can’t beat ‘em, join ‘em and I did. They were fabulous company and all loved my ‘Abuelo Loco’ tag. They plied me with a local concoction that was similar to rum and coke from a huge communal pitcher and my speaker got another turn to show itself off. There was only one other lot on site, in a big motorhome, what they thought of the commotion we created until the early hours I can only imagine. No wardens on these campsites telling you to turn it off at midnight! 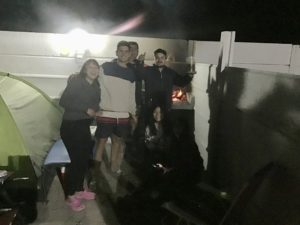 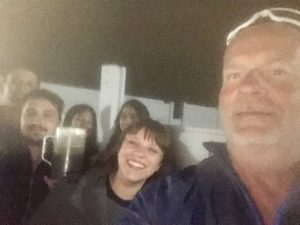 Photos. Party in full swing with BBQ in the background and note the pitcher of ‘Gancia’ and coke. Very similar to Rum and coke.

My easy ride to El Condor the next morning turned out to not be as easy as it should have been. I never suffer from hangovers, the serious headaches that other folks describe, but I was certainly not going to be able to turn the pedals with my usual efficiency, that was for certain. I even bumped into Silvio and Juan Carlo as they made their way back to La Loberia, towing the food truck, and when we stopped for a chat they could spot straight away that I was the worse for wear. Hands up, my fault, sympathy not expected or deserved! Anyway, I made it into El Condor eventually and found a cheap and ok hotel and soaked myself in the shower for what seemed an eternity, then went to find an ice cream shop, the first in several days.

El Condor wasn’t much to write home about. Pretty naff if the truth be known. There was even a massive storm on the first night there that turned the ocean from the amazing colour it is in these parts to a dirty brown similar to the English Channel. No worries though, this was just a stopover before heading to Viedma, and for once the forecast regarding the wind was excellent. A nice following breeze and only 30 kms. I couldn’t wait. And it turned out to be right, a beautiful morning, just a few metres of climb following the Rio Negro upstream from the coast, and I churned out the distance in no time. Back in business and all I have to do now is get my friends here to advise me as to where to go next. Maybe up to Bahia Blanca before skirting around Buenos Aries and into Uruguay, or head north-west and aim for Bolivia. Stay tuned!