Eventually the day came when the chicks could be moved from the kitchen, where they were getting on my nerves, outside. Brilliant! I really did think it was my Birthday and the constant noise and smell was, at long last, going to be a thing of the past. A cage was already in situ in the garden, and Fefa, Fede’s wife, bundled the chicks into a sack for the transfer and I got rid of the bike box which had been their home. That first evening was bliss. I had to turn the sound down on the laptop because of the lack of ‘chirping’. (Recently I’ve started to binge watch TV series, currently ‘Vikings’ after whizzing through all 3 series of ‘Narcos’ in about 10 days earlier this month. This, along with a bottle of vino collapso, is how I spend my evenings after a day of being a zoo keeper. More of ‘Vikings’ later)

The next morning and first duty is to check on the chicks and they were all present, correct and, most importantly, alive. Feed and water them, same for the hens, followed by Vaquita the dog, who still has no idea that she’s a sheep dog so when I want to move the sheep she gets shut in the kitchen. The sheep now wait for me to open the gate in the morning and they wander out into the back garden without me doing a thing. Very well trained, and I now regret calling them stupid. Sylvester and Adolf the cats are fed last. Then I can stick the kettle on for a coffee, and have my morning fix of Sudoku, ‘Evil’ level. After my second mug of coffee I get on the bike and ride into town and go to the gas station where they have wi-fi and I can check emails and find out what’s going on in the world. To fill up the evenings, (I can only watch so many episodes of whatever TV series I’m watching) I now find articles of interest in the papers and load them onto the laptop, each on a new tab, so that I can read them later, at the farm, when I don’t have access to the ‘net’. Clever huh?

I got back to the farm and went to check the chicks and find some of them have escaped and need to be re-captured. Great. It turns out that some of the smaller ones have worked out that they can squeeze through the wire. More frequent checking and catching by yours truly needed. Even worse, later in the afternoon I find one has just decided to die. No injuries, just ‘brown bread’, dead. Down to nine. The next morning 3 have disappeared without trace. Down to six. Now, however, the remaining ones are definitely too big to get through the wire and therefore should be safe. No more escapes and I can relax a bit. Not a bit of it. The next morning all of them had gone and there was evidence that something had dug underneath the cage and had the lot. No feathers or remains but definitely an experienced tunneller was to blame. The cats, Sylvester and Adolf seemed to be hungry when I gave them their food but were they just trying to get me to suspect someone else? I have decided to point the finger firmly at Adolf as he is most certainly a sly one and has a moustache, and the hole under the cage is too small for Sylvester to get through. Never trust anyone with a moustache is my motto so Adolf is the culprit as far as I’m concerned, or maybe there could be a weasel with a moustache? 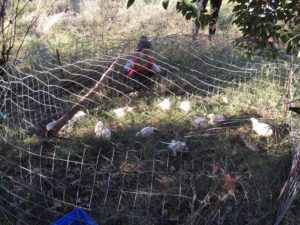 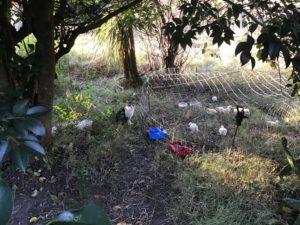 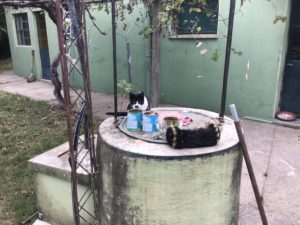 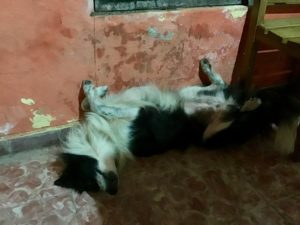 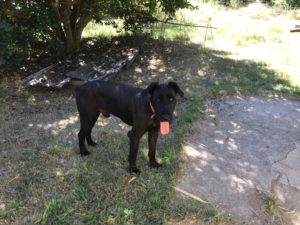 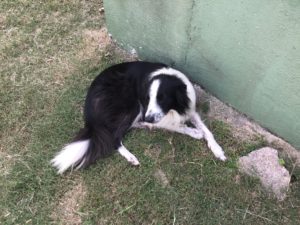 Photos. The chicks new home and being watched by Isabelle, Fede and Fefa’s daughter. (Not a suspect) Chicks being watched by Sylvester. (Potential aid to the chief suspect) Adolf, chief suspect and the closest I’ve managed to get to him so far. Vaquita dreaming Cocker Spaniel dreams. The big dog from next door. This fella is huge but big soft and dopey! Vaquita having woken up and still not knowing she’s a sheepdog.

As well as my zoo keeper activities I am now, as Winter approaches, tasked with chopping firewood. The incentive is easy. Although Durazno is at the same latitude, albeit in the southern hemisphere, as central Spain it can still get pretty nippy during June, July and August, so just in case I’m still here then, and with the only way of heating my ‘accommodation’ is with a wood burner, it means if I don’t chop enough wood I will get cold. The axe I get to use is not a good one, and the head keeps coming off. Fortunately, the city boy has learned how to fix it and carry on. I really don’t like the cold, particularly after my years in Laos! Now chopping wood is a bit like cycle touring from the point of not needing too much in the way of thought, just turn the pedals or swing the axe, and there’s loads of time for the mind to wander and while I was chopping away one day my mind turned to ‘Vikings’ which I now pay great attention to in case I can get some tips to improve my axe wielding technique. I also thought about a comparison with my now redundant golf swing and decided that way back in the distant past and when I was at the peak of my powers, my golf swing and my technique with the axe would naturally be similar, i.e. movements of great beauty and precision, coupled with unbridled violence! I get so wrapped up in the ‘Vikings’ thing that I sometimes yell, ‘Odin! Odin! Let me die with me chopper in me hand! You’re right, I need to get out more! 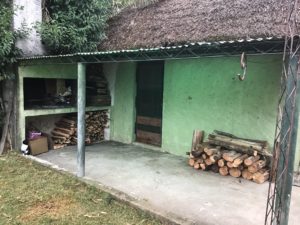 Photo. The woodpile is growing. Appearance of Adolf the chick killer.

Wood chopping injuries, so far, have been clobbering myself on the foot with the axe after destroying a log and during a wonderful ‘follow through’. Luckily the axe hit my shoe without too much force and so only a smidgen of bad language was required. Then a big log split unexpectedly (due to the insane amount of power I generate no doubt) and one piece wacked me on the shin. Socks got a bit bloodied and I had to search for the first aid kit. Loads of bad language this time. Add to those a number of bruises and cuts to my hands and it’s a steep learning curve. Needless to say, appropriate protective gear is conspicuous by it’s absence.

However, there was even more drama in Tata, the local ‘supermercado’ the other day when yours truly, for some strange reason had a ‘bit of a dizzy turn’ and I actually thought I was going to pass out. The duty manager saw I wasn’t in great shape and got me a chair so I could sit down and a glass of water. She even called a doctor as I was looking very pale. The medics (plural) turned up and checked my pulse, blood pressure etc. and before I knew it I was in a wheelchair and was wheeled across the road to a waiting ambulance. Most embarrassing, I can assure you. They then checked more stuff including blood sugars and asked me a load of questions.

The conclusion they came to was that I had gone far too long without food, and I needed to eat. Uruguayans never go very long without food, but then wonder why they tend to be on the large side. The medics were very nice but their diagnosis was way off. I think my dizzy spell was because the special offer price on my ‘vino collapso’ had finished and I was therefore in a state of shock! Seriously though, I was not in a good way and Fede was called and took me and the bike back to the farm in the pick-up. I had some grub, a bit of sleep and was then fine, but what drama?

Then there was the chair collapse. Yes, the luxury chair that I get to sit on completely gave way as I was easing myself onto it. At the time I was checking something on my phone so had no chance of putting my hands out to stop my fall and consequently have a very badly bruised arse! Don’t worry, there won’t be any photos of that, just the chair. So I have now come to the conclusion that this farming malarkey is potentially a bit dangerous.

Being on the farm involves spending large amounts of my time on my own, which is fine for the most part but some company is always welcome and for 5/6 days I had a cycle tourist stay at the farm as Fede is part of ‘Warmshowers’ which is the cycling equivalent of ‘Couchsurfing’. Jonas has loads of experience as a cycle tourist and it was great to be able to exchange ideas about where to go and kit to use etc. The advice, as I’m still learning, did tend to go mainly in one direction! Many thanks Jonas. 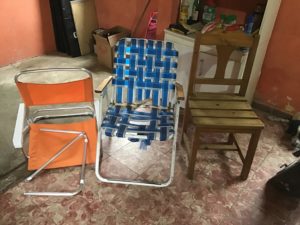 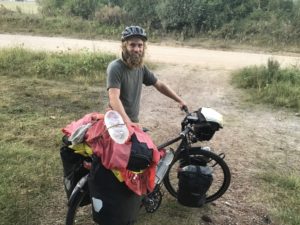 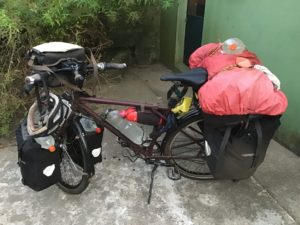 Photos. The selection of luxury furniture I get to sit on/destroy in the kitchen. Jonas the Swiss cycle tourist and his rig.

Enough for now. As always thank you for reading this far and may Odin, Thor and Freyr go with you.