Photo. Antares Bar in Bahia Blanca. Their craft beer menu, most brewed on site. One of the many places to enjoy the explosion of craft beers here in Argentina’s bigger cities. IBU, the extreme right-hand column, was new to me. Never heard of it before. It’s the International Bitterness Unit. The higher the number the more bitter the beer. The IPA was the highest and when given a sample glass I only needed to smell it to know how bitter it was. I must add that I did drink it, just to make sure.

In my blogs I am regularly mentioning the stuff that’s new to me and that I really lack experience in. Cycle touring and camping mainly but also the logistics of this type of travel, particularly here in Argentina, and you know this has all become very strangely addictive. Bloody tough at times, but the aim of getting to the next place and the sense of achievement on arrival is incredible. Also, the strange feeling as I roll into yet another place of ‘what’s this place going to be like?’ is a sensation that I still can’t find the right word for.

It’s not trepidation because that would imply fear and why would I fear anything? I think the closest I can get to would be ‘intrigue’. What am I going to find in this place? Am I going to meet great people with whom to have an interesting conversation or just folks who are going about the business of getting through life? Are the shops going to be open? (In France this is usually ‘Non’) Will I be able to stock up on stuff I need? Will there be somewhere to sit, relax and just take some time to watch the world go by? Then, only in the afternoon or evening of course will be, ‘will there be a decent bar?’ Only for the energy you understand? I need to keep turning the pedals after all. Great thing about getting so much exercise cycle touring is I can eat and drink what I like, and a lot of it as well!

I’ve never been much of an aficionado of spirits but I think I know a great deal about beer. Now most of you will think I’m only knowledgeable about beer from one side of the bar, but this may come as a surprise to some of you. I know a heck of a lot about the other side of the bar as well! In an earlier period of my life I took on the lease of a golf course in North Wales. Financially this was the biggest mistake of my life and cost me such a huge amount it hurts to think about it. However, in a roundabout way, and trying to take positives from negatives, the experience sent me in the direction which finds me where I am today. Massively poorer monetarily, but so much richer in many other ways.

The golf course was on a holiday park and the clubhouse was open to holidaymakers and the public, consequently it was devoid of the petty bullshit like dress regulations that has caused the game to go into decline in recent years. It really was informal and in a good way, like a village pub. From being a newcomer to the bar business I took just 18 months to get the bar entered into the Good Beer Guide, the Campaign for Real Ale’s, CAMRA’s, Bible. This involved learning how to keep and present an award-winning real ale which was brewed on the site. I even came up with a couple of techniques to maximise the efficiency of delivery and storage.

My love of Guinness meant that I quickly got the brewery to send a technician to get it installed and whilst he was in the cellar putting in the pipework etc., I stood over him asking question after question. After about 45 minutes he asked me if I was new to this business and I confessed sheepishly that I was. He told me that was a good thing, I was asking all the right stuff, and that when he had an opportunity he would make a point of coming to the bar for a pint of ‘the black stuff’ as he knew it would be in fabulous condition.

I was there 5 years before setting off on my travels around the world and eventually settling in Vientiane, Lao PDR and getting lured back into the bar business. (It’s great fun but an absolute killer regarding work load if, like me, you take a hands-on approach to the business which I feel is essential for success) I ran Blue Bananas for 4 years and so I think I can rightly claim to know a thing or two about bars and pubs. Where was I? Oh yeah. I know a great deal about beer! 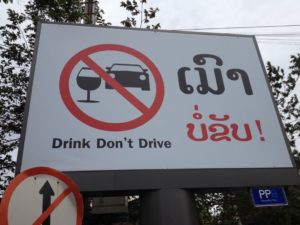 Photo. Sign in Vientiane, Lao PDR, setting the tone for priorities for the citizens! (OK, it’s a language error) Beer Lao is a lager, which is not my favourite beer, but if I had to drink lager for the rest of my life it would be Beer Lao. As the Government own 51% of the brewery they want their people to drink a lot, and they do, as they make even more money out of them.

During my time in Laos I would keep in touch with the UK by reading the national press online. One topic that came up on a regular basis was the decline in the pub trade with alarming figures regarding pub closures at something like 30 a week! Various causes were always mooted. The smoking ban and the drink driving laws being the most common reasons why pubs were struggling.

When I arrived ‘back home’ at the end of May 2018 I was keen to see what was going on first hand. What I noticed, after 12 years away was that the places doing well, and there are a lot of them, have ‘raised their game’ in terms of the quality of service they provide which includes staff training, general ambience (stopping the arseholes frequenting a place) presentation of the bar, cleanliness of toilets, and quality and selection of food if they offer a kitchen service. The message seems to be, ‘if you’re going to do it, do it very well or not at all’.

In one of my earliest blogs I mentioned the Tarrington Arms, about 7 miles east of Hereford in the UK. I put my head round the door one afternoon at about 2.30pm, desperate for some liquid refreshment and a rest in their beer garden. The doors were open and an idiot was sitting in an armchair watching some crap on the TV when I asked if I could get a drink. His eyes never left the screen, he just told me, ‘we’re closed till 4 o’clock’, in a very curt manner. I wasn’t in a great frame of mind after a hard day in the saddle and, although not a violent person I wanted him to suffer all sorts of shit! The place itself was a mess and would be a great setting for a horror movie. That was 6 months ago and I would be surprised if it’s still open.

Location is hugely important and there will be good little ‘boozers’ that have unfortunately fallen by the wayside through being in the wrong place. The village pub is the cornerstone of life in the UK and it’s not all about drinking alcohol so much as a meeting place for good conversation. The places that are doing well have moved with the times and re-invented themselves to keep pace with changes in modern life. I was very impressed with what I saw and the places that have ‘stepped up to the plate’ seem to be thriving, and good luck to them, as I know from first hand what a tough business it is.

Back to the present day and Bahia Blanca where I stopped for Xmas and to do some badly needed washing of clothes as they were starting to get a bit ‘whiffy’. I was directed, by one of the hotel owners, to an Avenida where there’s a great selection of bars all offering their own craft beers. It just so happens, surprise surprise, to be in the student area of the city, and these places are really buzzing, which is great as the country is struggling with massive rates of inflation and in general is, sadly, not doing well now. 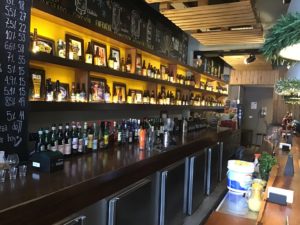 Photo. The extremely impressive back bar in Antares.

Infrastructure is badly in need of investment and the currency is falling in value. This was useful to me however, after my wonderful bank in the UK, despite being told I was here, refused my attempt at a cash withdrawal at an ATM, as a security measure. If it hadn’t been for the good nature of a really nice couple who became aware of my predicament I would have been in trouble with only 5 pesos to my name. They quickly changed $20 (US) for me to get me out of a mess, and then directed me to a shop where I could change $100, all at a very good rate I might add. They were obviously keen to get their hands on a more stable currency.

I only made it to Antares Bar from all the places I could have gone. I went back because I got a great welcome and the bartender knew the products they were selling inside out. He kept offering me sample glasses of each so I could try before committing to a purchase as well as interesting information about the different beers and their production. Heaven!  It seemed pointless to go somewhere else to, possibly, be disappointed. They even sell draught beer in re-usable plastic containers for take away! 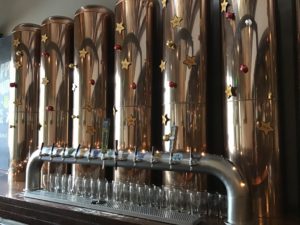 Photo. More of the amazing set up at Antares, Avenida Alem, Bahia Blanca.

Enough for now. As always thanks for reading this far and may your God go with you.