The farm. I described it in my previous post as an ‘overgrown sub-tropical jungle’. I estimated it to be approx. 120 metres long and about 15 metres wide, sandwiched between two other properties, with no other dwellings close by. I’ve just found out from Fede that at the end of what I thought was his land, the property opens up forming a ‘T’ shape and comprises of a total of 7 hectares, which is about 17 acres, give or take, in ‘old money’. This extra piece of land looks as though it’s been grazed recently as it’s nowhere near as overgrown as the bit that I shall call the ‘back garden’. I was relieved to hear about the sheep being brought in to eat their way through the garden, but I was concerned about the seeming lack of tools that I would probably have to use to ‘cultivate’ the rest of the place. The things I had found around the property would probably be dated from the Victorian era and would be drooled over by the relative ancient tool expert on ‘Antiques Roadshow’. Solid iron, rusty, and as heavy hell. Easy to use they are not! Imagine how pleased I was when Fede turned up and emerged from the house with a strimmer.

Not only a strimmer, but a very new strimmer, definitely this century. He jump-started it and went to work as busy as a busy thing. I did think that this would be a demonstration of how strong and capable he was. You know, a sort of alpha male macho thing. I just got on with sweeping the cobwebs off the ceilings and the straw from the floors with the new broom he had arrived with, and let him get on with it. Then after half an hour of strimming he went back into the house and emerged with a chainsaw. Again, a very new looking chainsaw, and proceeded to attack a tree which he described as a pest. I thought it looked ok, if a bit too much of it, but there again with my current level of knowledge regarding gardening, and left to my own devices, I would be ripping up the plants and nurturing the weeds! There was one thing growing that I took an instant dislike to and had decided to give it the ‘treatment’ when time allowed but fortunately before I got to grips with it, Fede and Fefe both started fussing over it and then took some clippings and told me about what a wonderful thing it was. I had to make sure it was watered and they would let me enjoy it in mate, which is the green tea that is amazingly popular in Argentina, but even more so here. Adding the leaves of this plant, finely chopped, apparently cures everything. Heard it all before. When it cures death, let me know more. 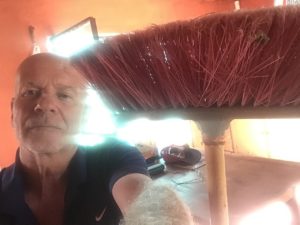 Photo. My new, but second-hand, broom. Trigger, (Only Fools and Horses) eat your heart out! ‘17 new heads and 14 new handles. I kept my broom in good condition, and it’s lasted me 20 years.’

Back to the chainsaw. I did wonder, having never used one before, but it’s not rocket science is it, about using a chain saw, and I thought about the health and safety wallahs back in the UK who would be jumping up and down and screaming about safety this, and safety that. Not here in Uruguay Buster. My philosophy regarding it’s use will be to keep bits of me away from the bits of it that move, when they’re moving, and that will have to suffice. Enough to be going on with! The bits he cut off I removed to the front garden in preparation to being burnt and when I’d moved the last bits Fede had brought two rickety old garden chairs from the kitchen, two glasses and a large bottle of beer and asked if we should indulge. My answer was very simple. ‘Fede, I’m English, what do you think I’m going to say?’ We indulged. After we had downed the beer Fede then returned the strimmer and the chainsaw to the house and locked the doors. Obviously, the gringo is not going to be allowed to play with them yet.

Earlier in the day I had completed the cleaning of the fridge and it was now in a suitable condition to house my food. The freezer had worked so well that it was solid and so it couldn’t be cleaned very well. I decided that having removed ‘Frozen Froggy’, the non-French champion hide and seek contestant with a sharp knife, that would have to do. When I next have to defrost will be the time when the freezer gets it’s turn for a shake-up. Clean fridge, and it’s shopping time so I whizzed down to the local ‘supermercado’ to see what I could get hold of. I already had some food in the bike panniers which was there for emergencies and so I emptied all my bags to assess what I had and, more importantly, what might be needed. I made a list which went something along the lines of……Wine, water, cheese, more wine, eggs, yogurt, soy sauce, even more wine and then, because I’m so healthy, I decided to add a selection of things to go with pasta, you know, veggies and stuff. Just to make sure I wasn’t missing anything I added another bottle of Vino Collapso, yes, they have Pueblo Sol here! You just can’t be too careful, can you? 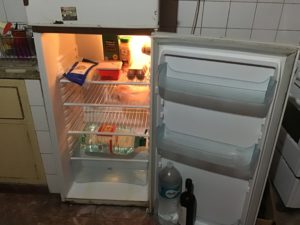 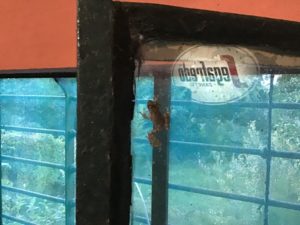 Photos. The ‘new’, clean fridge with some supplies, one bottle of wine is being enjoyed as I type. Not ‘Frozen Froggy’, but a loser in the World Hide and Seek Championship.

Despite the accommodation not being 5-star or even 1 star, I do like it here and with a bit of work I can turn it into something more than ‘doable’. Hopefully I will learn new skills and enjoy the learning of new skills and in turn those skills will open new doors to more opportunities like this and possibly I will, along the way, make lifelong friends whilst living a lot more cheaply in return for a few hours work per week. I already feel that I have a lot more direction now and, so far, Fede seems like a great guy but I have already put the question to him about my allowance for food and what he wants me to do in return. I want to get this sorted ‘early doors’ so there are no issues or misunderstandings, and I hope we can make things clear early on. I’m sure things will be great.

Yesterday we both jumped into the pick-up and went to a neighbouring farm to see if Fede could rent a couple of sheep for the garden. It turned out that on Wednesday there will be a livestock market just outside town, and we’re going. He told me, with some enthusiasm, that at these markets they have ‘cantinas’ so no doubt we will be ‘on the sauce’, I just hope we don’t forget the sheep! Hoping that I might get to meet a few more of the local population and learn some more Spanish and even if it’s just farming Spanish it’ll be a help.

I have attacked the bathroom and it’s almost fit for purpose. Fede, after I had presented him with a list of cleaning products I needed, only came back with a fraction of the stuff, and the things he did bring were in the singular. Scouring pads, for example. I wanted one for the kitchen, one for the shower and the wash basin, and another one for the toilet and bidet. (As a single bloke for many years I do know how to take care of a house, just in case anyone was wondering) That makes three scouring pads, absolute minimum, and normally it’s difficult to get them in packs of less than six. Not here it appears and there’s no way I’m using the one that’s blitzed the toilet anywhere else! Senor, we need more, and a new list will be presented.

Well, I’ve just had a visit, late evening, from Fede and Fefe along with their two little ones whose names escape me. No visit earlier today to discuss the allowance for food which needs addressing, particularly as I now have another invitation to volunteer at a small farm near Montevideo. Just think, I could make the return journey and have it out with that vicious bloody pit bull at Canelones! Tempting, as this time I would be prepared. I’m thinking hand grenade, maybe rocket launcher, get my drift? Anyway, it’s not just Fede and family but the remaining dog, un-kidnapped from his Mum along with 10 chicks, one of which is chirping along to the music I’m playing in the kitchen. Yes, they’ve been installed in the kitchen and I’m not sure how long for. I have Vaquita the collie, lying under my chair but who has got used to me quickly after an ear scratch and a belly rub. Nice dogs are easy, but she seems to have been dumped here which is great, but surprising. The chicks, inside 10 minutes, have names. Very easy, one, two three, four, etc. etc. up to nine, and then I’ve named the noisy little bastard, McNugget, because that’s it’s destiny! 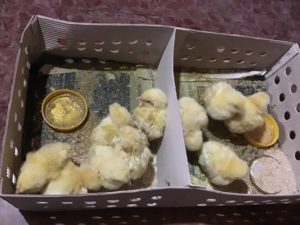 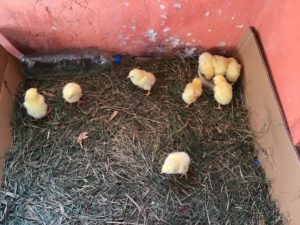 Photos. My new housemates, all 11 of them. One intelligent, the others pre-ordered Tikka Masala, plus McNugget. I’m seriously wondering if, after tonight, I can remain a vegetarian much longer? Watch this space……………

As always thank you for reading this far, and may your God go with you.