The forecast for wind, which has been surprisingly accurate, so far, tells me that I’m going to ride through, and stay in, three little towns that apparently have some character and each of them places where, I have been told, I will probably like to stay longer. I’ve been told all sorts of things on my travels and some of it has been accurate and some has got me thinking, ‘what planet was that person from’.

First Tornquist, which is about 80kms north of Bahia Blanca. I got a sense of something a bit more than usual as I rode into town. Just a hunch but it turned out to be correct and after checking into a very nice, yet inexpensive, place I was motivated to go out again and do a circuit of the town and take some photos. That’s when I started to realise that I should have taken a lot more photos in France and Spain and that the only excuse I have is that this whole adventure/ disaster is a work in progress. Bit like my whole life really! When I first started out I had enough on my plate just getting from one place to another and finding places to eat, drink and sleep. As parts of my journey are becoming more automatic I need to get pictures of more places and things to bring this more to life. Also, the villages and towns that I’ve been to so far in Argentina have lacked much in the way of interest. Just functional places, except the ones with beaches, but I’ve had to push the bike through far too much sand, so my interest in beaches is less than zero.

Tornquist just gave me a sense of whoever is running the place has great pride in their town and collectively the residents must love living there. I’m just going to show a selection of photos with a short description of each and I hope you enjoy. The only place I didn’t photograph was a beautiful outdoor swimming complex, firstly because I couldn’t find the way in, but more importantly because it was after the schools had closed and was packed with kids. In these modern times it would be considered most improper for a guy, however innocently, to be taking photos of a swimming pool that happened to have loads of kids in it, yet if a woman did the same thing no-one would bat an eyelid. Sometimes I think the world’s gone mad. 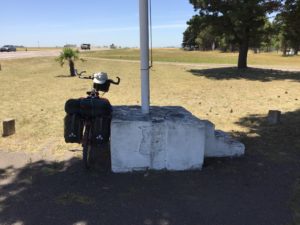 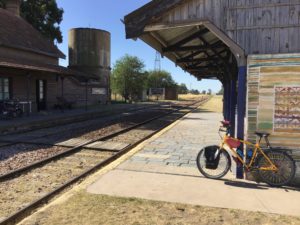 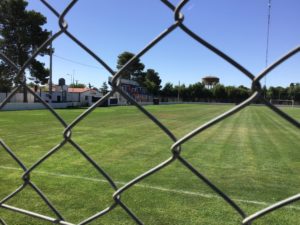 Photos. 10 kilometres from Tornquist and break time. You have to imagine me lying on the concrete block with my legs over the back of the bike and fast asleep. The train station which is operational but I think the trains are weekly. Superb, very well cared for soccer pitch although I couldn’t get inside the wire for a better shot.

I also found a brilliant heladeria, ice cream shop, as I always do, although this one took a while to hunt down and I was beginning to panic somewhat. 56 flavours of ice cream and 7 varieties of chocolate. I’ve always had trouble making up my mind when offered too much choice so it takes me longer to order than eat the stuff. Then in the evening I found a superb craft beer outlet, ‘Berracho Parce’, which was the ‘puppies privates!’ (It’s English for ‘very good’) Great music and atmosphere, wonderful stout and excellent pizza even though I would have preferred a big bowl of pasta with salad. If only the wind forecast had been bad I would have been very happy to stay here a few days more. 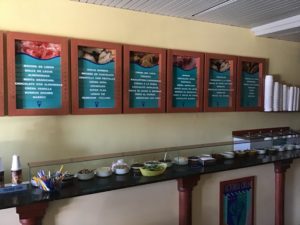 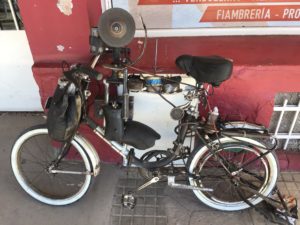 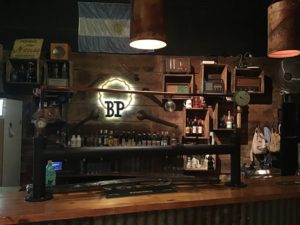 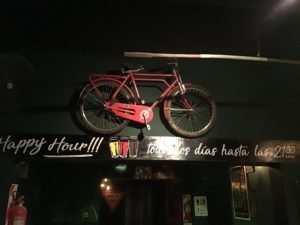 Photos. Ice cream shop. Not just 56 varieties but 27 different toppings! Saw this bike outside and waited for the owner to ask about it but no-one appeared. Great machine. ‘Barrecho Parce’. Great bar, great staff, great atmosphere and, of course, great craft beer.

Pigue was next. 70kms further north and I got the impression, on arrival, that it was also well kept, and again there were things I wanted to take pictures of. Nice boulevards and, like Tornquist, a train station. I got the impression that the frequency of a train arriving would be about once a week and the whole town would turn out for the event. Found the heladeria for my mandatory after ride ice cream easily enough and had a wander and established the location of the ‘cerveceria artesanal’. Toscana.

Before that I had to find a place to stay and checked out a place called Hotel France which had some ‘interesting’ reviews on google maps. Now I don’t take too much notice of reviews of places online but sometimes they make me curious and this was one of those occasions. As I walked into ‘reception’ I had a feeling this would be an experience and then the owner appeared and the words ‘miserable’, ‘hatchet-faced’ and ‘witch’ sprang to mind. As soon as she opened her mouth I knew my initial assessment was spot on and after asking about a single room for one night, but asking to see it first as I wasn’t optimistic, she begrudgingly led me through a narrow, dimly lit corridor to show me the ‘room’. I asked how much and she told me 450 pesos. This was the moment I made mental note to practise my Spanish a lot more as I so wanted to tell her that she was going to have to pay me a hell of a lot more than that for me to stay in that shithole! Homeless people would refuse to stay there even if it was free. I just had to say ‘no’ and leave. Subsequently I found a very nice place, and very clean, for not much more.

The bar, Toscana, was showing signs of ‘Frenchness’, i.e. not being open on time, although in fairness they did get things going but only after I’d got there and thrown a spanner in the works by being the first customer, 10 minutes after their published opening time, but for them unfashionably early. Now I have, in the dim and distant past, been the guy leaning on the pub door at opening time, but even after I’d given them 10 minutes to be told that the craft beer was still cooling and would not be ready for an hour was disappointing. I had to have a bottle of regular beer or, as it’s known here, ‘industriale’, which translated to English means ‘crap’. To top it all off, and after taking an hour to drink the ‘crap’, they then told me the stout and porter were both off. Bloody typical!

Stout is rich in iron and is very often recommended to folks suffering from glandular fever. As a young man I used to consider myself very unlucky to never catch glandular fever and be told to drink Guinness. Life, sometimes, just isn’t fair is it? I have thought for many years that when I ‘pop my clogs’ and depart this mortal coil I don’t want any doctor writing on my death certificate that my cause of death was an iron deficiency.

Poor Toscana. I threw another spanner in the works by ordering the only vegetarian item on the menu and it took forever. Two delivery drivers appeared and I got the idea that things were having to be specially ordered for the bloody gringo who ordered something without meat. 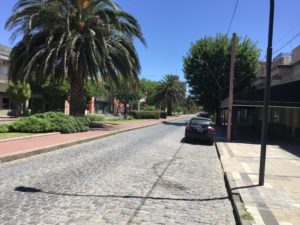 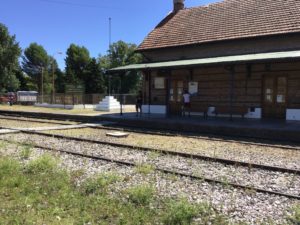 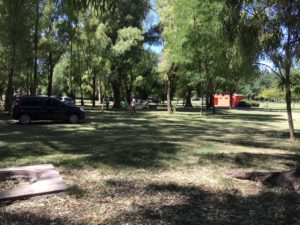 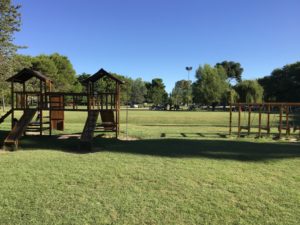 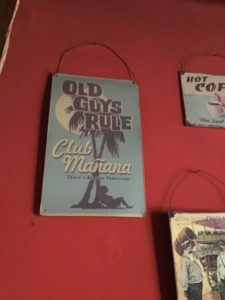 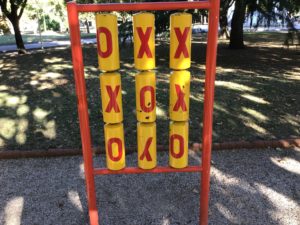 Photos. Pigue, Main Street. Pigue Train station. Huge park near the centre of town with picnic benches, BBQ pits and playgrounds. The only picture I bothered to take in Toscana. Yes, old guys do rule! Tic, tac, toe game in one of the parks. Reminded me of the time when I had to have a rabies booster shot after getting bitten by a puppy that I had rescued from the street during my time in Laos. I had a shot in one arm and then they had to test for an allergic reaction before I had the second shot. The nurse made a very small scratch on my arm and drew a circle round it with a pen. I so wanted to take the pen from her, draw a cross on my arm next to the circle and hand the pen back to her. I didn’t because they already thought I was mad bothering about a dog.

Now Guamini, another 70kms further north and where I will have to seriously consider the next leg of my journey. I’m now starting to feel under a bit of pressure as my visa expires in 5 weeks and I’m still a long way from Uruguay. I know, if I have to, that I can go to an immigration office and get a visa extension easily but I’m not sure where to find them. Google may have to come to the rescue. Guamini has a municipal campsite, on the shore of a huge and very beautiful lake, which is superb. Very much like a beach resort and it has a reputation of being very well kept. When I arrived in town I rode around the area and took some more photos but decided that some of the stuff about teenagers riding motorbikes around late into the night, that I’d read online, were likely to be true as it was a festival weekend and the place was packed. So I scarpered and found a very nice and very inexpensive hotel. Good decision and it was only 200 metres from an ice cream shop and the best bar in town was just around the corner. Yippee! Shame about the campsite, because it does look to be well maintained, but if I have to stay another day, which would be Monday, it might have calmed down a bit????

The ‘best bar in town’ turned out to be closed! (More Frenchness) There was another place serving craft beer which was close by the lake but a bit of a walk from the hotel. The beer was very good and I thought the night was saved but they were not serving any food and I was starving. Just as I was about to have a last drink there and then hunt out a restaurant, the place was invaded by every type of flying insect imaginable and I had to beat it fast! Guamini was turning out to be a damp squib and when I discovered the only place to get any food on a Monday night was a mini market, I decided I would head out of town the next morning even though the wind was going to be in my face. This place, after such a good early impression was a bit of a let-down. 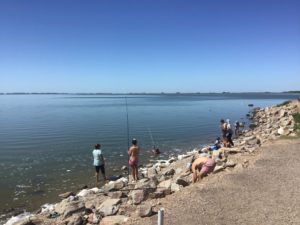 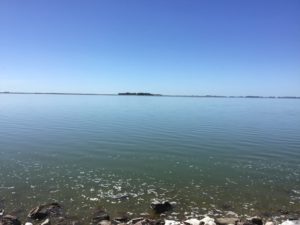 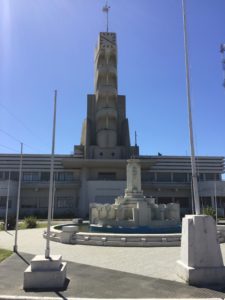 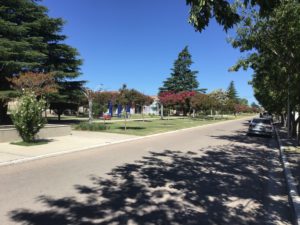 Photos. The lake at Guamini plus the world’s worst clock tower. (What were they thinking) And a couple of random shots of the Main Street near my hotel. Guamini, less than inspiring.

Conclusion. Tornquist, easy winner. Pigue, runner-up but not that close. Guamini, never got off the grid.

Back on the bike and a lost camera.