Uruguayan food and the driest place on earth.

The last month has just flown by and I have been as busy as a busy thing, really enjoying having something to do particularly the chance to actually produce something, and all of it comes from reclaimed/scrap metal and timber. All I have to do is find the right sort of stuff from what looks like one of the ‘junk yards’ here on the farm, and re-cycle it to make it into something useful.

I am also in the middle of my period of ‘farmsitting’ while my host is in Europe, not for his holiday as planned, but to collect his father who has been taken ill. Fortunately, nothing too serious. The deal for me here is that I work 25 hours a week and in return get accommodation and all my food, and in addition cultural exchange! I started off sleeping in the converted chicken trailer, and very comfortable it was, if basic and very small with bathroom in the main house. Now I’ve actually moved into the house and have been given ‘boss duties’, so I’ve really hit the heights! The only downside to staying in the chicken trailer was what I now call ‘constant canine cacophany’.

Where we are located is the extended outskirts of Montevideo. The farm itself is beautiful and has been in the family for 3 generations. However, expansion of Montevideo over the years has meant that some areas of the city are right on the farm’s doorstep. Piedras Blancas, where we are, is apparently one of the worst areas around and everything is under lock and key with most households having dogs as security. The dog’s job is to bark at anyone and anything that moves close by the property they are guarding. Once one dog starts barking next door’s dog follows suit and quickly a ‘domino’ effect is created and I’m not talking about a deluge of shitty pizzas.

At the farm we don’t have neighbours much closer than about 200 metres but it’s still possible to hear in the middle and far distance a constant barking that begins around 10.30pm and just doesn’t take a break until 6.00am when folks start getting up and the dogs have done their job and can go to sleep. (And they certainly earn their keep!) The noise doesn’t keep me awake as such but it’s there all night, every night. Monotonous is not the word. 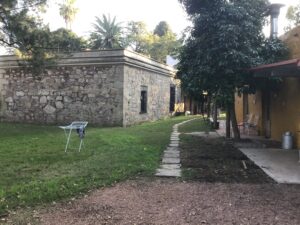 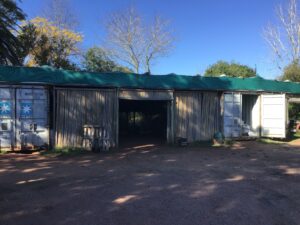 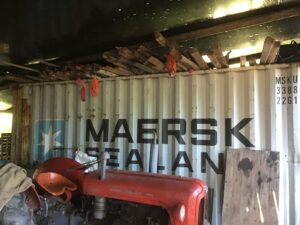 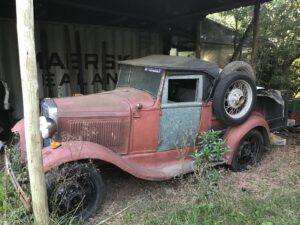 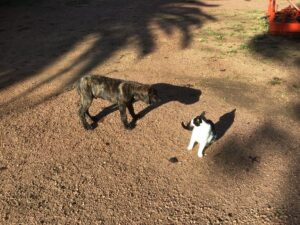 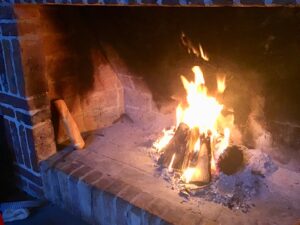 Photos. The main house, built in stone. The building on the right is the kitchen, diner and guest room where I was for a while. Two sea containers form the main part of the storage for machinery, including a Massey Ferguson! Also a 1931 Ford. Possible restoration project for an expert? Contento, just about to get his nose cuffed by one of the cats. My frozen baguette defrosting in the hearth one morning. Took my eye of it for two seconds and had to lever it out of Contento’s jaws!

As well as board and lodging I was hoping to also improve my Spanish but that hasn’t happened as my hosts have Italian as their first language. There is Alberto, an elderly (78-y-o) Uruguayan guy who is a worker here and ‘lives-in’ but I can’t understand a word he says and it’s dawned on me that it’s not just ‘Spanish’ that’s spoken in these parts. Also, should charades become an Olympic sport, Alberto would have no chance of representing Uruguay. Go on Alberto, give us a clue and try some sign language.

I’ve been aware, for many years that the Spanish spoken in Spain and Latin American Spanish are quite different, and have done my best to make sure I’m working on the latter. I now realise that there’s also ‘Uruguayan’, whereby all the words are shortened leaving anyone who has made some sort of effort to learn more formal strains of the language shaking their head. Add on to all that the stuff which Alberto speaks which I now describe as ‘Uruguayan without teeth’. It really is impossible for me to make out what he’s saying, which is a lot, and consequently I’m convinced that he thinks I’m an idiot, because I don’t understand more than one word per sentence. (How, without teeth, he gets through as much meat as he does is beyond me. Maybe he just sucks it into submission?)

And there is a lot of meat happening here now. Mathias, my host, is a great chef and lives a mainly vegetarian lifestyle with only occasional carnivorous meals. I’ve really enjoyed pretty much everything that’s been put in front of me, (polenta is the one exception) but I was also looking forward, while he was away, to doing some cooking for myself. Unfortunately, that hasn’t happened as the cleaning lady has been tasked with keeping me in stuff to eat and Alberto in stuff to suck. This is genuine Uruguayan cuisine and to say it lacks variety would be a gross understatement. It’s meat and potatoes and, on occasions where the boat is pushed out it’s accompanied by more meat and more potatoes. They seem to avoid onions, garlic and any type of seasoning as if it would kill you. I add a lot of salt to my food just to give it some sort of taste, and the looks I get from Alberto are hilarious. I can only imagine him thinking, ‘you wouldn’t get me putting any of that ‘foreign’ shit on my food!’ Consequently, ‘Contento’ the puppy has been getting a lot of my grub with me living mainly off oatmeal, toast, fruit and veggies when cleaning lady isn’t looking. Come back soon please Mathias!

‘Contento’ is a great young dog and I’ve really enjoyed looking after him. He now sits, when told, before I give him his food and at 13 weeks that’s pretty good. (Even though he ‘sits’ in English!) Despite his youth he is already the size of a small Labrador and as well as quite a bit of my food he’s very keen on getting stuck into the other dog’s food as well. (Fortunately, he’s already fully house trained which is useful as there’s an expression that goes, ‘big puppies make big poos!’) The cleaning lady put a leftover chicken carcass into the composting bin yesterday and he was in there like a flash. I’m sure it’s the only time he moves quickly.

As a souvenir I’m looking for a Uruguayan cookbook. It’s a sort of joke souvenir as Uruguayan cuisine is just so bad that foodies who come here will not be making a second visit. I can only imagine what a local recipe would be like. Let’s have a go at making Milanesa, one of the most popular ‘dishes’ here. Firstly, take a piece of an animal, (any piece of any animal will do because what we’re going to do with it will be certain to make it taste the same as anything else) and batter slices of it with a sledgehammer for as long as your physique will allow. Take a rest. You will need it and there’s definitely no reason to rush excitedly into this meal! Next, beat an egg and dip the well battered slices of the aforementioned animal in it before then dipping the resulting mess in breadcrumbs. *On no account must the breadcrumbs contain any seasoning. The ultra-bland stuff you can buy in supermarkets here will suffice. Then fry until all moisture is banished and it takes on the texture of well hardened boot leather. Serve with lumpy, dry, un-seasoned mashed potatoes. The ‘taste’, I can only imagine would do a good impersonation of a vintage cardboard, and I would recommend washing it down with a quality motor oil, nail varnish or preferably arsenic.

Recently I googled, ‘driest place on earth’ and got Wright Valley in the McMurdo Dry Valley, Antarctica as the No. 1. Honourable mentions going to places like the Atacama desert which straddles the Chilean and Peruvian borders, and others in places like Egypt, Sudan, Algeria etc. etc. Another example of google thinking it’s better than it is because I know, without doubt, that the driest place on earth is a Uruguayan kitchen. Which one is debatable, and thankfully it’s not the one here now cleaning lady has been relieved of kitchen duties, but the winner of the title will be here somewhere. Such a shame because I really do like the people and the country.

The farm, luckily, produces fruit and vegetables and I’m very lucky that I can go outside and pick an avocado for breakfast or maybe an orange or an apple. The veggies are incredible as well. The question I ask is, ‘who eats them?’ I see lots of veggie shops and think that they surely can’t sell anything apart from potatoes. I met a Swiss couple who have been here for a few years and they told me that there are only about 5 restaurants in Montevideo that they would bother going to that offer anything of interest. Apparently, an up-market Uruguayan restaurant offers exactly the same stuff as a cheap place just with posh napkins. (Ironically, I could understand more of the Swiss couple’s Spanish than I could anyone else’s!) 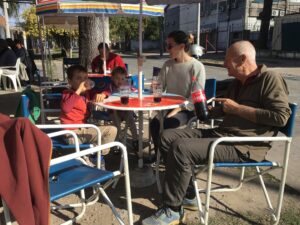 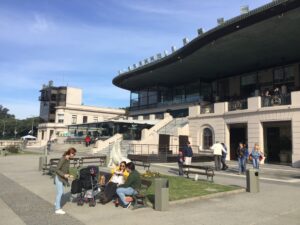 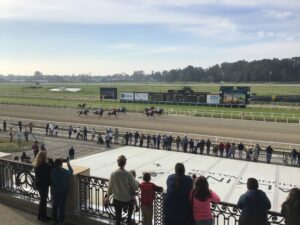 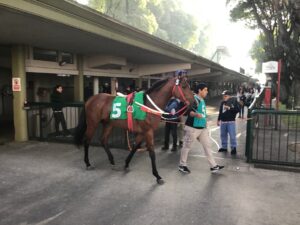 Photos. The Swiss couple, Ester and Luca came over one Sunday to take the kids off for the afternoon. I was invited along and we all went to the races. Uruguayan restaurant visit first, where the food lived up (or down?) to expectations. Never been one for the gee gees but it was nice to get away for an afternoon and see some more of the city.

I’ve now been in South America for 6 months and I’m yet to see a Chinese, Thai or Indian restaurant anywhere. I’ve found excellent Asian restaurants all over the world and they seem to have no worries regarding migrating and settling in far flung corners of the planet and selling their wonderful food. It appears that, in the past they might have tried, but they have now given up and gone as the typical South American palate is not conducive to fine cuisine. ‘Give ‘em meat and potatoes but make sure flavour and moisture is completely removed.’

Fortunately, I have just found out that Mathias is back in 48 hours and I can look forward to some decent grub and cleaning lady can go back to cleaning and stop insulting my taste buds. She’s very nice by the way, she just can’t cook.

Last Sunday was June 16th and, unbeknown to me, it was Father’s Day and my wonderful daughter has dutifully messaged me with good wishes. My reply went along the lines of, ‘to celebrate I’m just going out to shovel half a ton of chicken shit’. I did forget to say that in the afternoon I would then have to go on ‘dog shit patrol’. The things I do for accommodation and three meals a day!

I’m going to finish now but I will prepare another blog asap which will detail all the things I’ve done regarding recycling wood and metal and what I’ve managed to make out of it.

As always, thank you for reading this far and may Odin, Thor and Freyr go with you.