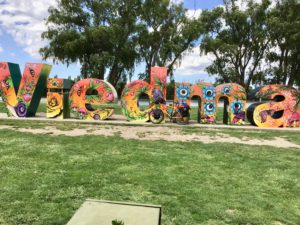 Photo. Every village or town, even the tiniest villages, have these sort of concrete signs, but I’ve not seen one as colourful as this! I think my bike fits in rather well.

I’m getting very close to the 1,000 kilometre mark from Buenos Aries. Only another 2,200 kms to go, or thereabouts to Ushuaia! And after all that way looking at flat, featureless nothingness, only punctuated by villages, towns and cities that served as places to top up the water bottles get a night’s rest and continue the next day. Nowhere really made me feel as though I could settle there.

Yes, Bahia Blanca has it’s craft beer culture, but even I can’t sit in a pub all day! It was on the coast but I didn’t make it to the ocean as I had a lot to do, especially getting my clothes to a laundry as they were starting to get a bit stale. I’m pretty sure I would get very bored there eventually, so Viedma and Carmen de Patagones, it’s twin across the River Negro, have really been a sight for sore eyes.

Photo. The river, which separates Buenos Aries Province from the Province of Rio Negro, including the old railway bridge in the background, that I rolled across as I entered Viedma.

For a start it’s not flat which makes a great change from the last 2 weeks. The river is beautiful and the town seems so much more vibrant than anywhere I’ve been so far. So much so in fact that I’ve decided to stay here for 3 nights which will include New Year. (I was in my tent for Xmas Eve) The forecast for strong headwinds did make a huge contribution to my decision as it makes so much difference to the distances that are possible, not to mention the effort needed. 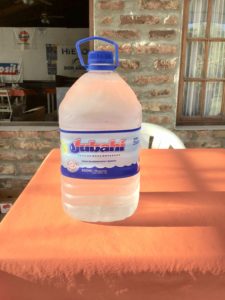 Photo. The guy who ran the B and B I stayed in at Mayor Buratovich sells water in 6 litre bottles. Perfect for a day or two and much cheaper than anywhere else. (Less than $2.00 US) I asked him to put one in the fridge for me for the next day. He went one better and put it in the freezer! Beautiful ice-cold water for at least 4 hours. Even in this heat!

The next day the wind had changed direction and I whizzed down to Stroeder, all 113 kms of it, setting a new personal best for a day’s ride, and having plenty left in the tank. If there had been something further along the road I would have quite happily gone on as there were over 5 hours of daylight left. The next day, of course, the wind changed again and the 85 kms into Viedma were just awful. Those last 30 kms took forever and I had to keep having break after break, and it was such a relief to stop and get an ice cream, then another, and then another! 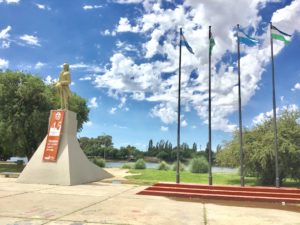 Photo. Monument to Francisco de Viedma, a Spanish sailor who founded the two towns in 1779 by establishing a fort by the river. Also the customary National and Provincial flags.

Great decision to have 3 nights in Viedma and really enjoyed meeting up with my new friends, and of course their extended family at New Year. The Champagne flowed and we had some fabulous food. I got to see a bit of the town and ate massive amounts of ice cream as seems mandatory here. Good fuel too. 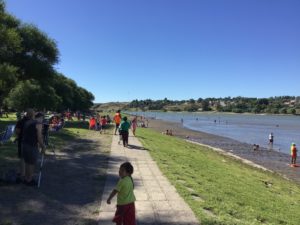 Photo. The riverbank is the place for families at festivals and holidays. It was absolutely buzzing and very, very hot. The little fella in the foreground couldn’t take his eyes off my bike and just after I took this picture he tripped over. No damage done though. 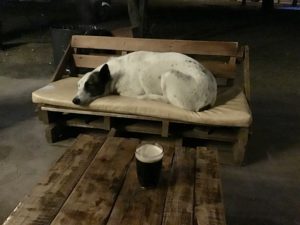 Photo. Another stout, $2.50 US or a fraction over 2 of the good old Great British Pounds. Delicious, and each pint came with it’s own guard dog, although this one was a bit dozy!

So after almost 1,000 kilometres of boring landscapes, the main reason for so few photos as there’s not much of interest, somewhere I could happily settle. The river is the focal point for the two towns and a meeting place for all. Viedma and Carmen de Patagones. Nice!

Happy New Year to everyone out there. I wish you all good luck, health and happiness and of course tailwinds for any of your who ride a bike. Thanks as always for reading this far and may your God go with you.