The ride to Puerto Madryn had been a shocker. New thoughts of ‘am I up to this’ had surfaced and I was as unhappy as I’d been for a long time. Things had to get better, surely. The forecast for the next day was that the wind would be much lighter and possibly help a little. Not for the first 7 kms though, that was going to be against, and I had to climb up the hill from the town to the highway. Still, as long as I was leaving that was ok, and the ride to Trelew, my next destination, was only 65 kms in total.

That climb out of town was tough, 136 metres of ascent, and it took me almost an hour, but I got to the top and was able to sit down in a chair at a mobile food truck, and have a drink and 10 minutes rest. I was even given an empanada by the proprietor, which I shared with a very sad looking Retriever showing that even after being bitten I didn’t hold it against all dogs. 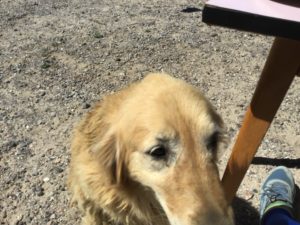 Photo. Sad, old, Golden Retriever who shared an empanada with me.

When I got back on the bike one of my bottles of water must have dropped off the back and I didn’t notice until I was 20 kms further down the road. No worries, the wind was ok, and I had plenty to get where I was headed. I did make a conscious note though to tighten the bungee cords that hold the bottles in between my tent roll and sleeping kit bag in the future. 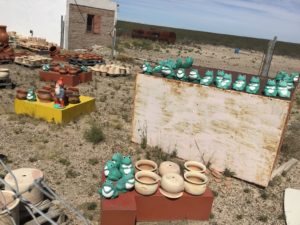 Photo. ‘Gnome and frog’ garden shop next to the food truck??????

My mood was loads better as I rolled along without having to grind out every kilometre, even the cars and trucks going by were giving me loads more encouraging toots and waves than usual. This was much better, plenty of crash barriers to lean the bike against and sit down to rest, big wide, smooth shoulder with no thorns grabbing at my ankles. Even when the Autovia that I’d been riding on stopped and I thought it was back to reality, it was only for 200 metres or so and then the conditions were great again, and I even had a long decent of several kilometres to enjoy, with Trelew in sight, where at one point the speedometer told me I was doing 53.4kph, a new record, and I honestly thought there was a chance to get to 60 as there was plenty of the descent left.

That wasn’t going to happen as the wind suddenly changed and started slowing me down quite quickly making me realise just how strong it can be here to slow down 50 kilograms of bike and luggage, plus me as well going down a fairly steep hill. The new Autovia had lasted in all for 50 kms, and took me almost all the way into Trelew. Not before going past the dinosaur which made me laugh as some readers have asked why I haven’t posted any landscape photos yet. It’s because there isn’t any landscape and this was the first interesting thing I’d seen except road signs and bars. 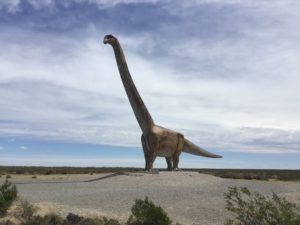 Photo. The dinosaur as the road enters Trelew. Why? Who knows!

After checking into an ok place in town I decided that I had a lot to do regarding preparation for the next leg of the journey and so I would stay here for 2 nights. This next part of the trip would involve almost 400 kms of riding and with only 2 gas stations on the way where I could re-supply. Getting the food and water levels right was going to need to be spot on, and the forecast for wind was not good, and for so long that I had no option of waiting around for things to change. I had to go.

One thing I did do was get some lights for the bike as riding at night, when the wind is usually lighter was something I was going to try. The reason I needed new lights was the back light hadn’t survived the plane journey and the front light is a great speaker/music player but as a light for riding it’s next to useless. It’s ok for when I’m in the tent at night though, so it does have some uses.

Another reason for staying 2 nights was the craft beer place I’d found on the net. It was excellent and Hernan the manager was an excellent host. I was blown away by the delivery system which was such that with one of the bar’s re-usable bottles they could be hooked up to the pumps and filled automatically. Amazing! 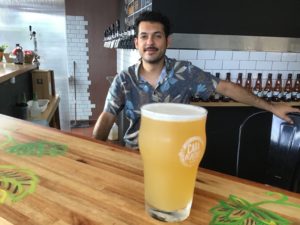 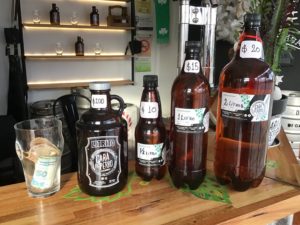 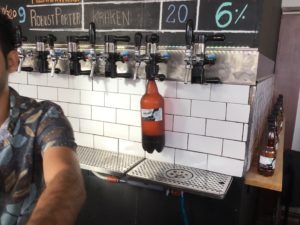 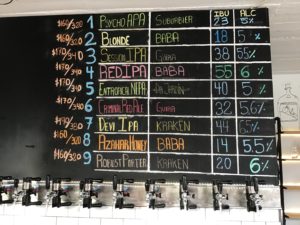 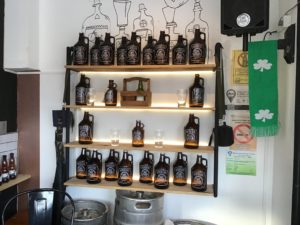 Also, I was expecting the usual round of issues with getting cash from an ATM. (This was, of course, another day after the great ride I’d enjoyed from Puerto Madryn to Trelew) The extra-long wait wasn’t the issue though, it was the amount that I was allowed. Now down to 4,000 pesos, about £75/$100, and yet the $9.50 service charge was still the same. (This was after going all around town trying to find a bank that didn’t use the ‘Red Link’ system which I already knew was not compatible with foreigner’s cards)

When I found out about the new, lower, limit of cash allowed, with the same service charge, the words ‘thieving’ and ‘illegitimate’ sprung to mind. I mentioned this to the guy in the bike shop and he suggested going to Carrefour and buying some stuff and asking for cash back! Great idea and, hopefully, avoiding charges. I hadn’t been in many places big enough to have a Hypermarket so the idea hadn’t dawned on me before. Maybe something good would come out of this?

Think of the irony. Were the French company, Carrefour, going to come to my rescue and provide me with cash, and with no service fee after all I’ve said about them? I walked in and headed for the customer service desk and with my now improving Spanish and just a little help from google translate, I was told ‘yes’, it was possible as long as I had my driver’s licence. Job done!

I pushed the trolley round for 20 minutes or so getting the necessary supplies and joined the checkout queue with debit card and driver’s licence at the ready. When it came to my turn I checked again with the guy on the till and he confirmed all would be good. Bingo. Yes, you guessed it. The system didn’t recognise my card and that was that. The French again. I’m surprised the place was open anyway.

Over 3 days things have changed from awful, the ride to Puerto Madryn, to great, the ride to Trelew, and back to awful again trying to get cash without it costing an arm and a leg. At one point I did think about not needing much cash anyway, as once I left Trelew there would be precious few chances to spend any for the next 4 or 5 days.

I was now, I thought, about ready to head off into the ‘boonies’. This was really going to be a challenge. Two gas stations over a total of nearly 400 kilometres. I had read about an abandoned building and a couple of gravel pits out of sight of the road, to wild camp in, but that was about it. The rest was apparently just thorny desert. Next town, Comodoro Rivadavia. Just hoping the wind would be reasonably kind, but that’s for another time.

Uruguayan food and the driest place on earth.

Chicken and Mushroom or Snake and Pigmy?